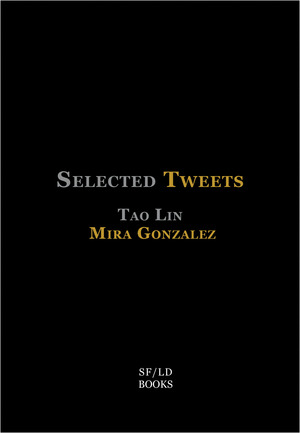 NOTE: SF/LD Books come with free e-book download when purchased direct through our site. When purchased, you will receive an auto-reply with a code to download the e-book, and physical books will be sent as soon as possible (or, you know, "small press ASAP." Thank you .

SHEILA HETI: How do you imagine people read twitter?

TAO LIN: On their phones I think mostly. I think I’ve read the most Twitter while laying in bed or on my back, or just laying in places, like in parks or in airports. Maybe not the most, but a lot. I’ve dropped my phone on my face many times. I think other people must too, but I rarely hear about this.

from "What Would Twitter Do" Tao Lin interviewed by Sheila Heti

SHEILA HETI: What do you think about before you tweet? You once told me that you tweet what makes you feel uncomfortable. So which tweets do you reject, which do you accept?

MIRA GONZALEZ: I wouldn’t necessarily say that I tweet what makes me feel uncomfortable, I think it’s more that I feel comfortable tweeting things that I would never feel comfortable saying in a real life conversation, or even in other places on the internet. For reasons that I don’t fully understand, Twitter is a place where I don’t feel ashamed to say my most shameful thoughts...

from "What Would Twitter Do" Mira Gonzalez interviewed by Sheila Heti

Broadly | Eileen Myles Has Always Been Cooler Than You

Tao Lin and Mira Gonzalez just put out a whole book of selected tweets.
I love that book. It's so amazing.

Yeah, they're great. I've noticed that you've been reading a lot with Mira. Are you a friend of hers? Is it important to you to reach out to younger female poets?
Yeah! I'm excited by their existence. When I first saw Mira's work, I think Sheila Heti turned me on to it, there was a thread discussing it on Facebook. Somebody was talking about her book, and I forget exactly how they were describing it, but they were being a little scornful of it. They were very uncomfortable with this "tossed-off" poetics, this "whateverness." But then when they used Mira as an example I thought, "[Her poetry] is not whatever," that's the performance. These are such crafted lines. I thought, This is a serious poet and I thought that's exactly what I'm about too. I don't want to belabor people with my seriousness, but I'm serious.

Flaunt Magazine | Art: Found $1800 cash & 7 hits LSD in my room in a thin metal container that I had misplaced last September & forgotten about

We discussed how we wanted to choose tweets before we started selecting tweets. Mira said one thing she was doing was choosing tweets based on whether, from one tweet to the next, in the book, it would be interesting to read. My section interacts with Mira’s because we mention each other sometimes, the sections overlap in time, and in the ‘Extras’ we mention each other again.

Flaunt Magazine | Art: officer, i am simply too stoned to look you in the eye

We both have always had the same philosophy about Twitter. We tweet similarly and both feel that Twitter is not just a website that doesn’t mean anything. In the same way that haikus have a really specific format, Twitter has a very specific format in which you can say what you want to say. We don’t view it as anything less than a poem or a short story. We’ve both always felt that way. My publisher suggested the idea of a tweet flipbook, and then I suggested that we involve Tao because I really like his Twitter and he was one of the first people to ever support my writing.

Although Twitter in name implies a kind of chatter or “twittering,” Tao Lin and Mira Gonzalez have elevated the medium into an art form with the power to transmit authentic observations. Which is not to say the collection doesn’t have its thorns.

The result is of a peeling away—each new account becomes more and more “unedited,” revealing more and more insecurities, neuroses, and vulnerabilities. As a collection, it leaves one with questions about the performance aspect of Twitter, the performative act of tweeting. Each account reveals more, but there are still gaps, things not included, things left out.

We chatted with Tao, in real life, not over the Internet, to get some secrets to his tweeting success.

“Selected Tweets” features a selection of bleak, depressed, disturbing, funny, and personal tweets that create a fragmented narrative and show how Twitter can serve as a platform for art, storytelling, and connection.

18 Books You Should Read This Spring | The FADER

Mira's tweets are self-deprecating to the point of hilarity, and Tao's are more neurotic—still "funny" but, like, in the way people sometimes use that word to describe a thing that's behaving oddly, like '"My air conditioner is actingfunny." They both tweet the word "Xanax" a lot. Get it in May.

Mostly, Twitter resembles a diary that is being written publicly and in real time. To Lin and Gonzalez, twitter is also a tool for writing. Like a director Lin and Gonzalez exhibit their creative power by picking and choosing which tweets to include in the overarching narrative. 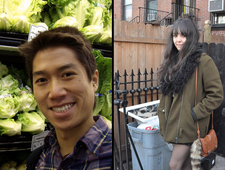 Tao Lin is the author of the novels Taipei (2013), Richard Yates (2010), Eeeee Eee Eeee (2007), the novella Shoplifting from American Apparel (2009), the story-collection Bed (2007), and other books. He edits Muumuu House and lives in New York. He has a website and a blog and is on Twitter and Instagram.

Mira Gonzalez [b. 1992] is from Los Angeles, California. She is the author of I Will Never Be Beautiful Enough to Make Us Beautiful Together (Sorry House, 2013), which was nominated for The Believer Poetry Award and The Goodreads Choice Award. Her work has been published widely in print and online. 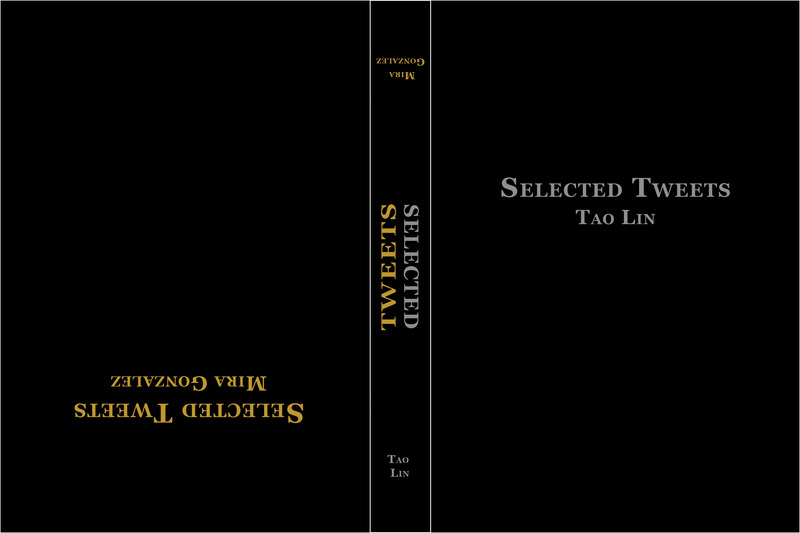