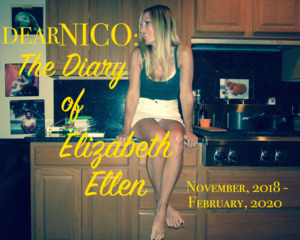 "Is this the actual diary you wrote at the time? The diary reads a lot like a novel, with its motifs of the murderess, the acupuncturist, etc."   -Garielle Lutz, author of Worsted and The Complete Gary Lutz

"It’s your best writing. I’m legit curious to see what happens with it. I could see it popping off. I could also see you hating the reaction to it. Lol. But I think that’s kinda the point. Provocateurs gotta provocateur." (unauthorized "blurb")

Fave line: 'I know I sound completely batshit crazy. And maybe I finally am.'"

In the fall of 2018, after beginning an epistolary friendship with the writer Nico Walker, on the eve of the release of his book, Cherry, I began a diary in which I wrote the letters I did not send to Nico, the letters or diary entries in which I documented the thoughts and feelings I dared not reveal to anyone then, not Nico, not my husband, not my friends or family: my feelings regarding my marriage (and subsequent divorce), my writing, my agent, my cancelation, the literary world, and, of course, Nico himself. I believed at that time, during the year and some months I was keeping this diary, writing these letters to Nico, I would one day give them to him. That did not turn out to be the case. Aside from one or two entries that I printed and sent to him, he has never read them. -e.e.

(letter I may or may not send Nico Walker after much thought and, ironically/unconnectedly? Watching How to Marry a Millionaire last night – I guess connected in that in the end, the much older millionaire man played by William Powell (swoon) is not married by the much younger (25 yrs old) Lauren Bacall (even tho irl she was married to the much older (25 yrs older!) Humphrey Bogart!))

Look. I’m going to cut to the chase. I think I was right many months ago, at the inception of our letter-writing, when I said I would entertain you until you get out, after which, you will date/see models and actresses and other young women. See, the thing is, I’m not George Clooney. Meaning, these things don’t go this way, in reverse. they go the way in which the man is older. Not the woman. And I was perfectly fine with aging before you came along. Really. I was. I spend 98% of my time/days not looking in the mirror. I don’t do botox or fillers or filters or even makeup, really. I think it’s all an incredible waste of time and a bore. And I like not worrying about aging or thinking about my face now compared to ten years ago. and, frankly, dating (or having any sort of romance with) you would be a nightmare in that regard. I imagine. Because, the thing is, Nico, you’re probably not going to date women your age, even. You’re probably going to date women ten years younger than yourself. Lobotomy-eyed girls, as Hunter once referred to them. So that’s fine. You can ring me up and we can have a good laugh about how ridiculous the young women you’re seeing/sleeping with are. I’ll always be your friend, of course. We could even have a beer or drink together, sometime, if you made your way up here. or maybe if we met somewhere else. who knows. I’m not saying we’ll never meet or see each other. I’m just saying, it’s no fun to compete with a version of yourself on the back of a book from seven years ago. It’s like Rita Hayworth said. Men wanted to go to bed with Gilda, the character she played in a movie. They didn’t want to wake up with Rita. I just want to save us both the awkwardness and embarrassment of the pressure of meeting now, where/when the stakes seem so high, and of watching your face as you realize I’m not the ‘Elizabeth Ellen’ on the back of Fast Machine (who, somehow, looked much younger than her 42 years then, in that photo!): disappointment. I’m just a normal, older woman. Attractive. But I’m not trying to compete with thirty year olds who already use botox and who also, it should be noted, probably have a penchant for substances I just have no interest in ingesting. In any form. That old dynamic! So I guess it’s back to work, work, work for me. And if I get restless I can go back home and sleep with an Elks Club member. Anyway, I hope this will come as a relief to you...

I prefer the older faces of Joan Didion and Keith Richards and Harry Dean Stanton...smoking lines and laugh lines and all the places you’ve been in life lines! All the loves you’ve lost and battles you’ve lost and all the romance of ‘character’ and history. Denis Johnson lines. Raymond Carver lines. Why would I want to erase experience from my face?

Actually, update (8/18/19), I changed my mind. I do want to ingest substances. Inject. Ingest. Whatever. I’m tired of feeling. I want to be numbed, too. life is too hard and I don’t want to feel the way I feel right now (without you) anymore. 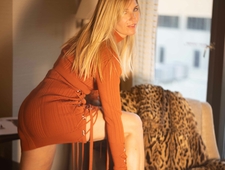 Elizabeth Ellen has had fiction featured in Harper's Magazine. She also asks a lot of questions.