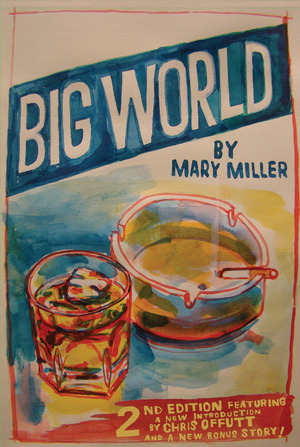 Mary Miller’s Big World is the second book and first work of fiction to come out of Short Flight/Long Drive Books, a publishing arm of the independent literary journal Hobart. The characters in Mary Miller’s debut short story collection Big World are at once autonomous and lonesome, possessing both a longing to connect with those around them and a cynicism regarding their ability to do so, whether they’re holed up in a motel room in Pigeon Forge with an air gun shooting boyfriend as in “Fast Trains” or navigating the rooms of their house with their dad after their mother’s death as in “Leak.” Mary Miller’s writing is unapologetically honest and efficient and the gut-wrenching directness of her prose is reminiscent of Mary Gaitskill and Courtney Eldridge, if Gaitskill’s and Eldridge’s stories were set in the south and reeked of spilt beer and cigarette smoke.

“Mary Miller is that most uncommon occurrence in literature—a natural writer in possession of narrative confidence, a bold precision of language, and a willingness to take great risks with story, structure, and character.”
– Chris Offutt (from the introduction to the 2nd edition)

"Mary Miller is a master of tone. Big World triumphs by inhabiting a persistent tonal landscape, a recurring state of mind."
– The Rumpus (read full review)

“Poorly concealed traps lie all over for the women in Big World in the form of married men, exes, a damaged sense of relating to the world. In other words, the traps are so big, they hardly see them before walking straight in.”
– TimeOut Chicago (read full review)

"in Miller's capable hands, the mundane becomes exemplary of the ways that missteps and habits cement themselves into low-level tragedy."
– Powells.com (read full review)

"Miller is in complete control of the scenes she creates. Full of character details that are illuminating, familiar, and often distressing, Miller's sharp and assured stories remind me of that people-next-door quality that Raymond Carver perfected in his body of work. Her small and quiet world does indeed become a Big World in our imaginations."
– Recommended by Kevin Sampsell, Powell's City of Books

"[Mary Miller] captures some essential spark that makes humans such complex creatures: the ability to face tragedy, to face apparently insurmountable loss and despair, and to see beyond, to imagine and to survive."
– The Short Review (read full review)

"Miller's great at turning the mundane inside out and letting the world see its guts."
– Metro Times (read full review)

"If Big World was a beer, it would be the type of beer that carpet-bombs hangovers in the form of bowling balls (shard/chunks/stilettos off; the type of bowling ball you find often abandoned in creeks, alongside upended shopping carts, those mud-clutched femurs, skulls), big ol' Moon Pies echoing upside your forehead. The characters would not bowl. They would watch others, disinterestedly, like observing flies on a windowpane. They would sip from those little crinkly bowling alley cups, and the pitcher urine warm, same cloudy hue, the sides streaked greasy. These characters would not bowl, not ever. They would watch, watch so closely (as in exactly) the pain of others (that they don't [can't?] express), that pain a moiling presence, or a caught truth, like hangover sweat seeping through pores, like what ifs, or what wheres. But no bowling. No lift and fling. No fucking way."
– Sean Lovelace (read full review)

"I am, without a doubt, profoundly envious of her work."
– HTMLGIANT (read full review)

"Big World reveals Mary Miller as a master of the slow-motion hysteria we as contemporary Americans know so well."
–The Portland Review (read full review)

“How would I describe the aesthetic, if pressed? Maybe New South, where the children aren't Southern, like their parents are Southern (i.e. the fathers hunt and drink whiskey and work jobs they hate while the mothers are busy gossiping and keeping up with the Jones's), but the remnants of that life are still there. Parents are often disappointed in the New South, especially when three out of four children grow up to be artists.”
A conversation between Mary Miller and John Brandon

“I guess I prefer to read stories where you can tell the author is invested in some way and hasn't just sat down and thought, "Today I'm going to write a story from the perspective of a homeless Haitian boy," when that person has never been to Haiti, been homeless, been a boy. It just doesn't seem like it would feel authentic at all. Or maybe I just lack imagination. This is entirely possible.”
read full interview at Luna Park

“I write stories that I want to read. I'm copying this answer from somebody, or a lot of somebodies, but I actually do like reading my stories. I guess they are are also for girls like me, but I don't really know what I'm like.”
read full interview at The Short Review

"Cedars of Lebanon" at The Collagist:

They had just been to IHOP, where they'd sat in the middle of the room at a two-top a couple of inches from a four-top, a man and a woman. The woman kept saying the man's name over and over again, viciously. It was a good name for hurling. They had gone in happy.

Now they were in her apartment and she was wondering how she would feel if she told him to never come back.

"Well I need someone to take care of me, too," he said.

He squeezed the different parts of her, saying, "These are mine, and this is mine, and this." He just loved her too much, he explained. She got up to make tea. He wanted her to help him clean out his camper so they could take it to Cedars of Lebanon. The camper was his most recent purchase, a little shit-can that said KNOCK THREE TIME HERE in sticker letters by the door. It looked like a child had put them on. 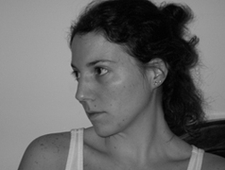 Mary Miller is the author of a story collection, Big World (Short Flight/Long Drive, 2009) and two chapbooks, Less Shiny (Magic Helicopter, 2008) and They Could No Longer Contain Themselves: A Collection of Five Flash Chapbooks (Rose Metal, 2011). Her fiction has been published in dozens of journals and anthologies including McSweeney’s Quarterly, Ninth Letter, Mississippi Review, American Short Fiction, Oxford American, Black Clock, Fiction, Dzanc’s Best of the Web 2010, and New Stories from the South 2008. She received a Master’s degree in English and Creative Writing from The Center for Writers at the University of Southern Mississippi and currently lives in Austin, where she is a Michener Fellow at the University of Texas and serves as Fiction Editor of Bat City Review.