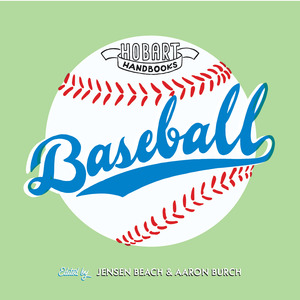 It’s become fun, and an honor, to every year hear people say that they look forward to ourbaseball issue as much as Spring Training, that Hobart is as much a part of their Spring as the return of baseball itself. I’ve tried, over the years, to explain “why baseball.” Because of its literary history, I’d propose. Because it is the most narrative sport, because it has the greatest opportunity for metaphor. But, really, it’s just because I like it. I grew up playing catch and backyard homerun derby, collecting baseball cards, going to games with my dad.

That’s always been the most fun aspect of Hobart—having an idea and following it through. Because… why not? It rarely mattered how silly or goofy seeming the idea, and we never really put any consideration into if readers might share our enthusiasms. What mattered was that we found the idea interesting, fun…it excited us. And so, that’s become something of a mission statement, for our journal that never had much interest in mission statements. Follow where your excitement takes you.