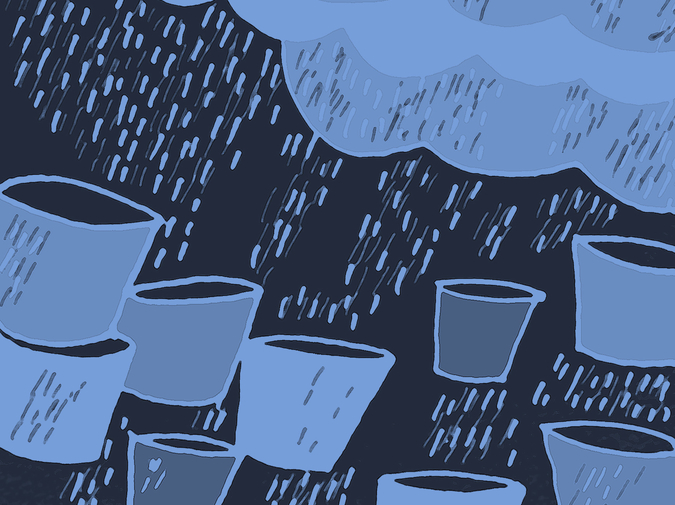 Yoda’s thirst proved more difficult than anything he had faced on the planet before. He did not have running water, and couldn’t just pop down to Pel’Kiha’s Corner Store anymore. His kitchen now consisted of rubble he’d salvaged from the wreckage and a force-made open flame. Boiling the liquid from Lake Dagobah only altered the consistency into a stewy goop. It was no more consumable than it was raw.

He had to outsmart the planet, and that began in a moment of inspiration he would have loved to hold over Mace Windu’s chrome head. Yoda fashioned a couple of wooden buckets, force-pried from the surrounding trees and sealed with hardened swamp muck that he had forced into mortar and baked into hardened sealant. While he had nothing to test it with, yet, this was the best bucket he had ever seen, and he considered himself a good judge of buckets.

Despite the blanket of moisture that coddled Dagobah at all times, the rain had not returned for two days, leaving Yoda to sit on his tree stump, preserving his energy for fear of dehydration. His skin felt more cracked than usual, he couldn’t even grunt without coughing. There were stories of Jedi calling the rain. But most of those stories involved Kamino, where it perpetually rained.

Still, Yoda tried. And tried again. Even the bogwings seemed to be trying , for they sat in contented silence over Yoda’s home, no longer tarnishing his roof, no longer intruding upon his home. Perhaps there was a respect now, though Yoda would have to reassess that when his brain was in a better state.

When the rain finally fell, Yoda’s mind came back from his Coruscant apartment and rested in the buckets of water pattering under the downpour. He had seen children at Coruscant Park during the rain, running around with their tongues out, catching rain drops. Yoda had a padawan do it once. He’d broken out of his meditation to run about like a neurotic womprat, giggling at nothing. Yoda had scolded him for it.

But as Yoda hobbled through the mud catching raindrops on his own cracked tongue and chuckling to himself, he wished he could find that padawan again. He wanted to revise his theory.

“After raindrops, you go,” he’d say. “Nothing else to worry about, you have.”