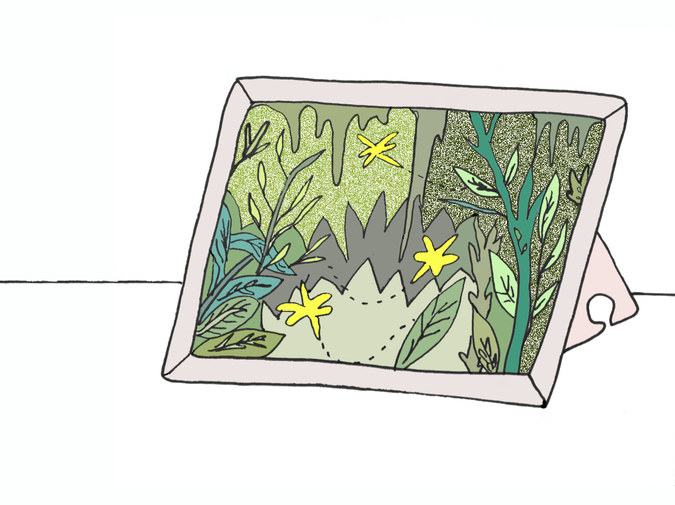 The top of Yoda’s house looked like it had been splattered with molded yogurt. There was an allure to it. Like, had he intended to paint it this odd assortment of colors, he would be proud of it. But he’d just woken up to it like this. And while he didn’t want to, he liked it. It had a certain panache that his hovel had previously lacked. That is, he liked it until the bogwing on the branch above him added another coat of paint. Still, it looked fresh. Interesting.

Yoda had a painting back in his Coruscant apartment of a Kashyyk landscape. Of course, everything on Kashyyk was twisted and green, so it all ended up looking like a bramble bush but this one had a little bunch of buzzing gnasps fluttering around the trees, which gave the painting enough yellow to make it stand out from all the other green brambles in the Kashyyk Artists Market.

The top of his house reminded him of that. A wide swath of white with little buzzing brown gnasps, spaced out just enough so that he had something else to look at when he got tired of the white.

He craned his head to look up at the bogwings sitting above him.

Yoda shimmied down off of his roof and landed on pleasantly solid ground. After nearly losing his home to a sinkhole, every bit of solid ground felt like a miracle. Whatever doubts he had that his house would survive were done away with by the Gnarlbark tree that now served as the primary support of his tiny little abode.

Which he had just discovered was woefully lacking in couth.

Of course, Yoda was no artist himself. He’d always considered himself more of a technician. Given the complete lack of sentient beings on this planet, the likelihood of uncovering someone capable of appropriately decorating his hovel were unlikely. So he either had to come up with solutions himself, or perhaps he could try manifesting the force ghosts of his long-lost Jedi allies.

Then again, there was a reason he never had a roommate on Coruscant. Qui-Gon’s décor was far too risqué. Mace Windu’s was too angular. Obi-Wan collected caricature portraits of small, scaly creatures. No one had the taste that Yoda did. The closest was Plo Koon, who was the resident abstract aficionado, but Yoda preferred art that was determined and planned, not resembling the aftermath of an exploded ink pen.

He looked again to the bogwings. They were staring at him. Were these his artistic icons now? But no, they hadn’t planned that art, it had just happened. Which is what Plo Koon believed in and Yoda detested. Yet Plo Koon’s Reflections of a Juxtaposed Mountain Path  still ranked in Yoda’s top paintings. He had the only copy. If only he’d had the foresight to take it with him when he was forced into exile.

He had only one choice. He had to become an artist himself.

Yoda walked out towards the trees. He was going to need utensils. Unfortunately, the entire planet was brown and green. He imagined he could find some yellow if he squeezed some of the brown and green things hard enough. He also had white, as he had found out just ten minutes prior. Still, if he were to create a palate that separated him from the drabness of Dagobah, he was going to have to want it.

This quest paired nicely with his daily stroll around Lake Dagobah. Now, instead of just walking, he was looking for colors. He started with the easy ones—brown and green. He collected every shade of green leaves he could find and found a nice pool of brown that he could call upon when needed. It seemed infinite.

There were also paint brushes. Little sticks with bristly ends that, if stepped on, would cause a great deal of discomfort, but in the hands of a technician-turned-artist, could change this small corner of the universe.

He visited the slugs he had previously used for nourishment, slurped a few down and squeezed a few of the others. Sure enough—yellow. Still he scanned the landscape for a red or blue. It would have to stand out amidst the dullness, but he saw nothing. If it wasn’t on the surface, he would have to look deeper. For now though, he allowed himself a moment’s pause to try out the colors that he had. Again defying the rules he had once set for himself, he removed a square piece of bark from a tree. His brown would do him no good here. Then he’d end up with something that Ahsoka Tano would have liked—monotone.

Yoda sat in the mud on the lakeside and rested the wooden square on his lap. He dipped a bristled stick into the yellow goop and traced it around the wood. The contrast was desirable. While yellow was far from his favorite color, it made for a variety that his eyes hadn’t seen in days and they feasted on it.

“Around the bend you go, yes,” Yoda said as he traced the thinning yellow streak around and back to itself. It formed what looked like an upright yellow spoon resting on a brown table. He didn’t even have spoons anymore. But he had a painting.

Yoda smiled. His cheeks felt rusty. He signed his name with a simple ‘Y’ in the bottom right corner and got to his feet. He wouldn’t say he was proud of his art. At least not yet. No good painting was truly appreciated right away. Then again, the bogwings didn’t seem proud of their art either, and that had turned out just fine as well.