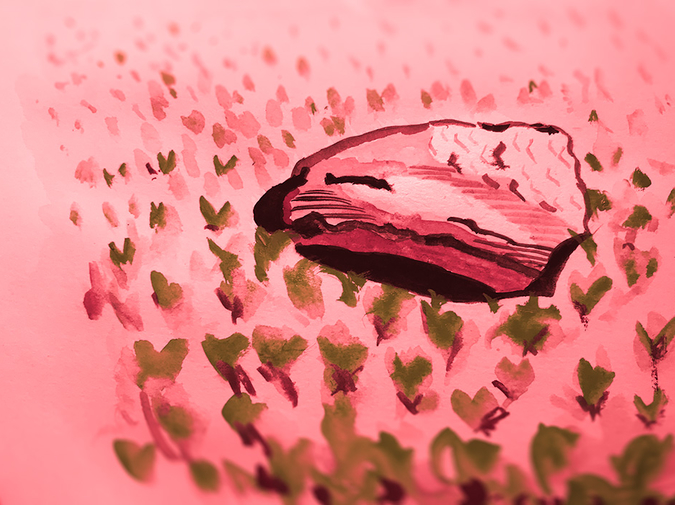 Yoda felt taller. It started when he bumped his head on the foyer archway and continued when he came back from his morning walk and had to hunch to get through that same foyer. Either he was getting taller, which he hadn’t managed in 600 years, or his house was—

Yoda lifted his submerged ankles, each popping like a champagne cork (Mace Windu used to love his celebrations), and stood atop the squishy surface again. With the bogwings having left, Yoda was finally alone. It’s what he had always wanted. But he had no capacity to appreciate it. He would give anything to freeze the world right now and sit in the quiet of his home. Only it was his home that wasn’t so quiet now.

“Foresee this, I did not,” Yoda commiserated. But he knew what he had to do. He just didn’t know if he could do it. Cutting out a perfect, rectangular door (also sinking) had been one thing. It had been taxing. He was tired. But now, to lift his entire house?

“Hm,” he grunted, extending his knobby fingers. What he wouldn’t give for a couple of Wookiee contractors. When his Coruscant apartment sprouted a leak in the bathroom, Yoda could have twisted off the pipe with a finger snap, but Haraffle and the Wookiee contractors had done it nearly as quickly.

He could hear the mud clinging to the side of his home like a living organism as he lifted. The planet was eating his relaxation, his retirement, but Yoda wanted it more. He had earned this. The planet hadn’t.

His home slurped out of the mud and Yoda opened his eyes. It hung in the air, cracks and fissures running along the outside. Had his home really been so fragile? He pushed it towards the nearest solid structure—a Gnarlbark tree. If only he’d had the foresight to crash land twenty feet to the north.

The wide base of the Gnarlbark tree provided a firm foundation to build on, and the ground around it looked more like ground and less like a bubbling cauldron. Its roots cascaded down like veins, reaching into the mud that had now swallowed everything up to Yoda’s knees. He set the pod down on solid ground and it jilted and rattled. This was not the home he knew just yesterday. This was an empty shell.

Yoda looked up into the branches. The bogwings were up there. Perched precariously over his pod. And they looked particularly devious. One lifted its tail and let loose, splattering the top of Yoda’s pod.

“Regret that, you will,” Yoda shifted his efforts to the branches on which the bogwings sat, but before he could lift a finger, a droplet of mud splatted into his face.

He broke his trance and looked down.

The mud was up to his armpits.

The entirety of the surface upon which he had built his house was sinking into the swamp. An islet formed around the tree that now sheltered his home, and while Yoda was half tempted to enjoy his bubbly mud bath, he saw in that shattered shell of an escape pod the chance to formally start his retirement.

“Do, this will not,” he said. Using all the power he could gather, he shot out of the mud with a deep grunt and torpedoed into his front door, lying on his cozy bed as if nothing at all had gone wrong. The exhaustion blanketed him as if he were still immersed in the mud. And he let it. He let it take him into a deep sleep. And right at the end, just before he felt asleep, he managed to muster up a smile. A roof and a bed. Luxurious.