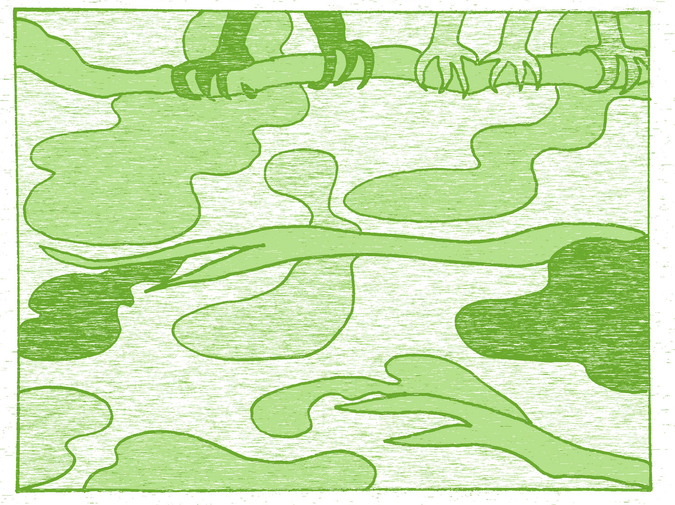 There was a certain nonchalance to it. Like he was living an easy life, unintentionally. As a Jedi, he had never considered anything easy. Except beating the piss out of wannabe Sith posers, that came pretty easily. But he still had to exert himself to do so. His career as an intergalactic enforcer of good was taxing. Every night he used to lay awake, wondering if he’d see another night. Every day was different than the last one. He never had to fight the same foe twice. Now, he faced a foe that had taken dominion over Yoda’s entire living. Routine.

Yoda altered his legs to sit full lotus—had he done this for five straight days too? He flipped up and did a handstand, holding himself there with pursed lips cracking into a smile. It was an easy enough foe to oust. This he was sure he did not do yesterday. But as his right elbow began to quiver he let himself down into half lotus. Exactly one half less lotus than he was used to lotusing.

Easing up on routine defeated it just as well as ramping up.

He had always told Qui-Gon Jinn to chill. Just take a deep breath. The universe isn’t going anywhere. Qui-Gon would always say something about how every breath he took, the Sith grew stronger.

“Impatient you are,” Yoda said now, as if Qui-Gon was there, judging Yoda’s half-lotus, pressing him to go full or create a new double lotus. For all of three seconds, Yoda lifted his leg to create the double lotus, but then lowered it back down to half lotus. He had already defeated routine. And while this was a rare foe that would come back and face him again, he welcomed it. Fighting routine keeps the mind active. Yoda was already questioning the approaches he could take to defeat routine and if that itself would become a new routine.

Maybe, in time, routine wouldn’t be a foe at all.

A bogwing squawked, then another. Yoda knew that at this very moment they were bickering in the branches of a nearby gnarlbark tree, four bogwings trying to fit on a branch built for the three. Eventually, the smallest of the bunch would succumb and hop to a nearby branch, still a part of the conversation, but far enough that he felt excluded. He was the Anakin of the bunch. Whiny. Entitled. One day that bogwing would snap and fly off planet, probably die in the thick Dagobah atmosphere.

Yoda looked up at the bogwings. They were sat four on a branch. The branch where the small bogwing usually sat alone.