What to Say and How to Say It 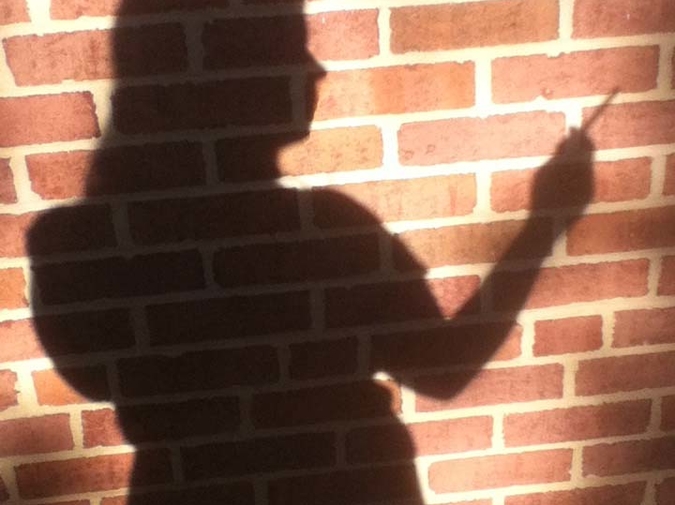 The apartment listing, spare and direct, stood apart from the exclamation points that forested her vision. She knew not to say to the broker that she was new to the city, no matter how the facets of the woman’s necklace shone and tempted. One bedroom, terrible kitchen, renovated bath and sunken living, gorgeous compromise all in all. Here's climate control, the broker said, and here’s a walk-in closet. There’s your fire escape. That’s a man.

Follow the finger and yes: a man, beardedly complacent, reading a slim tatty novel in bed. She laughed; he winked. She remembered her guide was a tenant, not broker, and ditching the lease in its final months—the man incidental, a decoration. He may as well have been a cat. She signed the densely printed forms in an office that afternoon, having nearly read them but losing to boredom and deeming the rent the lone detail worth checking.

On the first of the month, four likewise balding men, arguing in Arabic and laughing, carried boxes and furniture out of storage across the river. A graffitied truck rumbled to her new address, where they admired the handsome building before starting to ferry stuff inside. She stayed on the sidewalk, returning emails, micro-duty of the job she’d vowed to ignore for the morning, having taken a personal day. The balding brothers came back downstairs, laughing harder than ever.

Your husband, one said when she gave a questioning look.

A very humorous man, said another.

She trooped upstairs and pushed the front door more ajar and saw him, his beard a bit fuller and redder. Shirtless, lying flat on her couch, eating a quart of mint ice cream with a rubber spatula. It wasn’t going well. His chest was the stickiest thing she’d seen.

What are you doing, she yelled.

What? he said. I mean, I think it’s pretty obvious.

Your girlfriend moved out. I’m sorry, but you can’t stay here.

Oh, he said, that wasn’t my girlfriend.

And resumed his messy snack.

She surprised herself by calling 911 right then, a grim little milestone observed. Where is your emergency. She told them, and then about the emergency itself.

They began to explain, but she hung up, missing the heavy clank and high ding of the rotary phone she’d grown up on.

You’re gone, she said, striding out of the kitchen. The man was asleep, spatula wedged between couch and cushion. The carton of ice cream was melting out onto the hardwood floor, diagram of a spent security deposit.

Fine, let him nap, she decided. I’m paying these movers by the hour.

The rest of her possessions came in quietly, so as not to disturb the exhausted man of the house. The movers finished as the afternoon got humid, thanked her for the extravagant tip. Money was no concern, she thought, but witnesses now were. Killing him would be fine and also, she realized, somewhat tiring. The cleaning up. Mechanics of the actual deed. And guilty bags underneath her eyes. She sat in the bedroom and fought to see it but talked herself to sleep.

She woke at disgust at lying facedown on the unsheeted mattress. The tag stuck out, its language like lines of dirt. She’d never forgiven herself for believing the cruel older brother who said she’d go to jail because he’d cut hers off with a knife. From somewhere she remembered that this flap foreclosed the scam of a mattress filled with corn husks, or worse.

Was she being cuddled? For fuck’s sake, he had a hand on her tit. She elbowed him in the throat, and he came to, wheezing theatrically.

Don’t say a goddamn word, she said. In the living room she dispatched a furious note to the previous tenant, only to reap an auto-reply: abroad with spotty internet for the next six months or more and may not check this anyway, bye unless I care, haha. Slamming her laptop shut, she hollered back toward the bedroom:

Get clothes on, you shitheap.

In the end she mostly dressed him while he giggled and limply foiled her efforts and said she was being fresh. Covered in a silken fur, cowlicks all over his body, and kept on kissing the air to get her to look at his face.

Hopeless, the odds of helpful landlords—it was their fault he was even there. Instead she hustled the two of them onto a train that swung near the city housing bureau. There she made him sit on a bench in a lobby while she threatened her way into a moment with someone with a title. It was a beautiful black woman behind a big empty desk, and both of them went a bit weak before her.

Can I help you, she asked. The man laughed charmingly. He seemed more stoned than drunk. Unclear, either way, when or how he’d managed to become so.

I’ve been rented an apartment with a man in it.

That’s not a thing. I don’t think.

You don’t sound very sure.

Know what I believe? the housing official, hazel eyes hardening, pronounced over her desk. Not asking. Telling: What I believe, and I will not preface it that way, is that you have an existence which almost anyone could envy. You’re comfortably employed and pretty. You have a place to call home. It’s no concern of ours if you share your bed with some piece of ass who can’t say what you want to hear.

We don’t have sex, came the argument. The man was entranced by motes of dust that swam through panes of windowlight. He looked illiterate.

Maybe you didn’t read the lease, the beautiful bureaucrat said. Cause that’s about the only perk in the sort of deal you signed.

They went to the park. She walked ahead of him and sat on a small rise of earth and cried, left hand absently tracing through grass. That part of her nervous system staying occupied, or alert.

Anything I can do? he asked.

Uhuh, he said, as if not sure where was away enough. Then he plopped down next to her and set to rubbing her back. She flashed upon that leg of the bus tour in Bali when the greasy American boy kept trying to massage her shoulders, digging his thumbs up under the bones. She didn’t struggle now.

You’re bad at that, she said instead.

At home—their home—he mounted their flatscreen TV in order to watch a film she hated. When he mentioned over the final credits that he’d seen it a million times, she punched him right in the half-hard dick. Soon regretful, she brought him ice wrapped in her favorite handkerchief. Had dozens, all of them her father’s. He stuffed the bundle down his pants, wincing and sucking his breath.

That syllable. There were things life wanted that he hadn’t a clue how to give. And so it became the work of women to aid his muddle through. Other men did their part, happy to pass along a letter of introduction or buy him an overpriced bourbon, but anything more was charity, the exclusive province of women.

They watched another movie, one she hadn’t seen and rather liked. He made popcorn in her microwave and somehow got it not to burn.

How! she said. How long did you put it in? What setting?

I have no idea, he said.

In the morning, perhaps because he’d slept on the couch, she cooked him eggs and sausage. He tried to restrain himself but ate messily. Afterward she stripped him—he blushed from head to toe—and shoved him into the shower. He stood unmoving under the water for fifteen minutes before she yanked him back out, toweled him down, rubbed her own flowery deodorant into his bristled armpits.

They traveled to a ritzy thoroughfare lined with clothing boutiques. At one window display he stopped cold, admiring a sculpted gray suit or the tall white mannequin wearing it.

You’ve got good taste. Let me buy it for you.

The tailor wore suspenders that didn’t fit. He wrapped his measuring tape around her man’s long throat. The pair of them had heated eyes.

For half suit price, the tailor announced, I can just strangle him!

That’s tempting, she said. But get him one of those gray suits he can walk out wearing today. We’ll bring it to be altered later. And he wants a store credit card.

He astonished her by completing the application in fine handwriting. Someone has tried to train him, she thought. For a moment it seemed as if he didn’t know his social security number, but it came to him soon enough.

They hailed a taxi as thunder split the air.

At the terminal there were flights going all over the country, digits cascading down walls. His credit limit was too low to get him to the opposite coast, so she booked him to a flat farm state. A hundred left for him on arrival, so long as he didn’t splurge on Wi-Fi.

Don’t be angry with me, she said at security. I’m staying. What we had was fine, sure. I have other—other reasons.

I understand, he said to indicate that he didn’t.

She watched him off. It was ridiculous how he had no luggage. Massive hands twiddled at his sides. In the suit he was unstoppable, though.

Outside, the brief thunderstorm was over. Smell of rinsed asphalt. She got into a cab and said her old address, then the correct one.

I meant to kiss him goodbye, she reflected.

He’ll be back, the cabbie opined. Men are difficult to lose.

Dry leaves rasped along her street. She went up past her door to the roof, where other buildings stood in sight, purple sky filling with points of light. The blinking ones that were satellites or planes.

The world was was dying and bad; she’d flung him into its greasy churn. He’d not make his way back to her, unless in the way of a miracle dog, tracking by scent and magnetic impression. He’d not, by any gambler’s reckoning, survive.

If she saw him breathing again it would be someplace with palm trees. He’d be wearing hideous tropical shorts. With a lady more patient and finer than she applying sunblock to his royal nose.

She was able at least to regret her dealings, to wish they had been otherwise. He needed her, that much was true, and he wasn’t that much of a burden.

Miles Klee is the author of the novel IVYLAND (OR Books 2012), a finalist in the 2013 Tournament of Books, and the story collection TRUE FALSE (OR Books 2015), which drew praise from William Gibson and Gary Lutz. His work has appeared in Vanity Fair, Guernica, Lapham's Quarterly, McSweeney's Internet Tendency, The Collagist, Unstuck, Contrary, 3:AM, and elsewhere.