Tom Sizemore and the Heat Death of the Universe 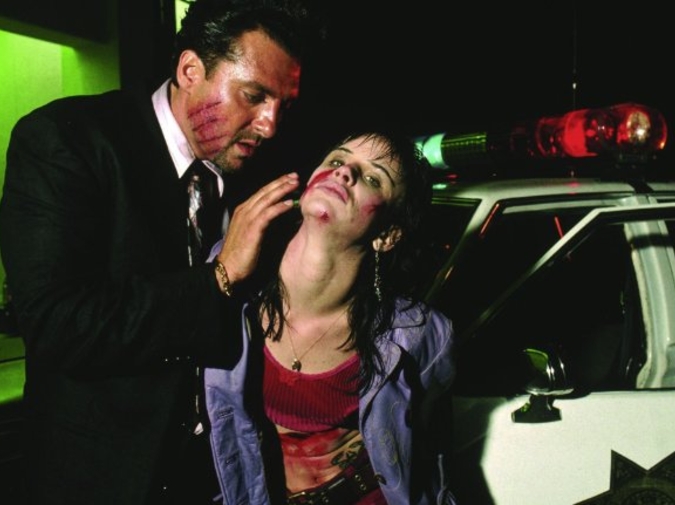 Sizemore performed like a psychotic hemorrhage the nineties couldn’t plug. He had a hyper type of kegels to his voice, a dumbbell frenzy tied to the crotch for staying single, style without blinking, an intentional sprain, spasms you might court. The man personified a neon violence. He didn’t need to try. He was born doing meth. That he went to jail for it later was just an afterthought. His forthright media addict routine is for the slapdash genteel, those who cloak themselves with what seems right, the Jerry Springer altitude soaring in every wifi pocket today, jungle gym blowjob scandals petering each itsy telephone. People want their maniacs explained. But there is no autopsy deft enough to expose how sensually disfigured a mind can get. What makes you snap is far more gorgeous than anyone’s biology. The unforeseen tragedy is copious drugs seem to have dulled his anger. He’s coasting straight to video. I want his mad back in place. Somebody give him a chance to lose it proper. I went to the same high school he did. We were taught the dangers of being too liked. The danger of being liked for a goddamn second.

I went to high school somewhere called Bishop Gallagher, a glorified dentist’s office almost seating two-hundred. The building was fused squat to an opulent church on the edge of Detroit, a slightly safer area than my previous beatings. They’d fuck with your tires, not the whole car. The old parish con that fanatics teach savvier, a multiethnic population, ghetto benefits with some god bunk mixed scabby in the seat. It is now perhaps halfway between a parking lot and a general hole in the earth, not that it wasn’t then. The English professor had taught Sizemore. He was bald, near seven feet tall, a catholic who believed in football, genius grammarian anyway, appropriately named Strunk. He would flip a desk to interrupt chatter. There was a giant hole in the closet door where his fist grazed a mouthy jock. Student buzz carried too loud and his keys pocked the back room wall with a robot fellated clatter. Imagine Rutger Hauer in Blade Runner aged as a testicular role model in the spittle of obnoxious kiddies. He’d even bellow a sarcastic, “That’s the spirit!” The kind of teacher you'd do anything for once your sensitive poet side prickled less doughy over whichever pinhole traumas his voice piqued in you and the silly fascist overture accusation was seen past as someone brilliant and eccentric trapped on an intellectual island. Then your work hellishly improved, dragged from your weakness to scour the entirety of language. True, I had little cult-shaped hearts in my eyes, but he was a great person, aside from my liking him. For starters, he was catholic and didn’t fuck us. He would even encourage me, whose creative output involved poorly jumbled diddlings concerning hump and slaughter, a fifteen year old just discovering De Sade. Not that I’m any different now. I found my unfortunate passion between him and the beats, writing tales of another teacher there, Strunk’s senile opposite, with her visible diaper line somehow maintained by payroll, even though I cannot, to this day, be hired anywhere, of course (will diagram a sentence lickity split), the coot who deodorized my academic career in her chamber pot. They gave her every lightweight subject and the grades were arbitrary and her faculties were altogether disappearing. Strunk got me through. Ah, but Mister Strunk, he dead. People like us require that measly condition. He also taught David Patrick Kelly of, “Warriors come out to pla-ay!” You see? We were a factory for the dirt. A good maniac only values their position underground.

In these narc decades absent of any Natural Born Killers, where our one American hope is the Ebola virus, the dark era following heat death of the universe seems so unreachably coy. Entropy’s just teasing. I feel privileged by our corner of Fellini circus rotating nonsense between galaxies, but cannot forgive that we were ever coherent. I want a firm shut up from the molecules out, right in the maw of this terminal strain of digitally sophomoric promulgation righting a notch between the heirloom tumors we must support. We would all prosper from turning certifiably not well. Mostly aesthetically, but what else matters? Let’s throw Nic Cage, William Forsythe, David Patrick Kelly (“Abashed the devil stood and felt how awful goodness is”) and Tom Sizemore some coke and task them with refurbishing the universe. Give Sizemore another rabid script, so when the Spielberg and Bay (the main reasons for his downfall) are shaken from him, the fucking air will finally taste good again, because a true maniac will be taking it from us.