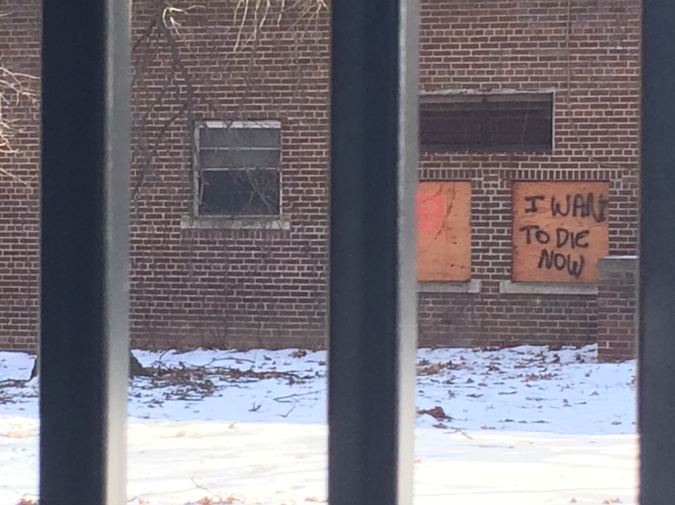 I was grown, tirelessly refused, partway adolescent and nonexclusive to the warzone mixing me incongruous by the weakest color I could openly project, near Saratoga Hospital in Detroit. Our cats began to appear by the grocery bag, tied on tree branches. Their impacted coagulation knocked back to the driveway with an imperial advertisement carved mid-torso, a motivational signature promising extra noteworthy crimes. Anyone forced by occupation or unfavorable American skin tone to grow up here wasn’t that startled or attached. We cleaved bird heads when they woke us, wings pinned under a shovel, polishing the neck spout along our porch for conversational aid. We tried to drown a girl in a two foot pool. Hadn’t occurred to us no one hid beneath the sun. My friend Kel interrupted the young lady’s retaliatory helicopter punching to interpret her head with a car window. He only spoke in sexually tense Orphisms. His father loved Metallica and treated him like a castle servant. He later broke Kel’s arm and hanged himself in jail. I was calmer. I liked knives. They flushed the local asylums for our truer parenting outdoors. Homeless former patients asked questions about pussy as we circled them on bikes. A used condom followed the sidewalk where they lived. Were they tapping out their pants that secretly? Which one prioritized our animals so easily into his merchandise? Only we were allowed to harm our pets. We waylaid labyrinthine alleyways in the dog fight grass. Random people threw rocks at me until I loved the film Death Warrant more than my friends. Enough of us, post-montage, with homemade bleach bombs and discolored knives could, once forged from cat Dahmer’s vision, hack the ankles to a wetwork, like our stature. Others rendered a bounty on his privates, which numbered plenty, we concurred, either sex. Someone pinpointed the bushes, where a robed and fictile butcher camped like a polyp on the church behind him. In this culprit’s lifelong tangent to shade onset senility, a fate surely mirroring my own, face plastic as the bags pluming from his tan-skinned coat, idiots prayed to the misidentified signage of his boogey man fertilizer, feigning birth with tambourines, not about to fail their enforcement of joy, the minor and mounting tragedies bowing excused. We didn’t plan our sins out by the week. Kel blamed sizable dogs when we burgled the church and shat, windows bricked from the inside to save us from the dinners of the working poor. I felt very pre white flight and by seven was frequently turned on. Kel’s sleepovers gave me asthma. The insulation of his house had great meaning for my lungs. My siblings were kept in utero, so I grew up conversing with my mattress. The tone deaf values most families scrambled to anesthetize irked my metabolism. They would stick any hemorrhoid in your ear and call it a rule. Every law seemed minute compared with what was happening. The few of us didn’t unionize the street with much gusto. Our threadbare approval had rotated elsewhere, beyond mutual alienation. Less about territory than being outside with someone’s blight on loan. The single smart move I made was to never assign my hide a worth beyond its general ability to scream. We had the appeal of your more nearsighted leftovers. Latchkey was some cheap-pooled parent house filled with my prancing crushes. My favorite speared me with chlorine water from her beautiful gums. She and I performed standup for the class. She could somehow arm-wrestle the sportiest boys crying. I pardoned myself because she watched you intently throughout, a level of intimacy beyond strength. She had a name that risked the seashore. I refused to speak of her aloud. The teachers called us liars when we raised our hands against god. She grew up with the rest of the lawyers. I had different prison themes to invest in. All my Rossini street gang had was sexless vendettas. No male was surrogate family to me. They were just there and likeable because I didn’t want to fuck them. We were all likeably there in order not to kill one another yet. We did frottage with whoever blocked the fantasy without regard, closing in on a particular pigtailed classmate formulation on rain-damaged ceilings. We kept engaging our pillows, owned the bacteria right from them, and bequeathed jejune farewells, parting for battle.