The Eyes of My Mother 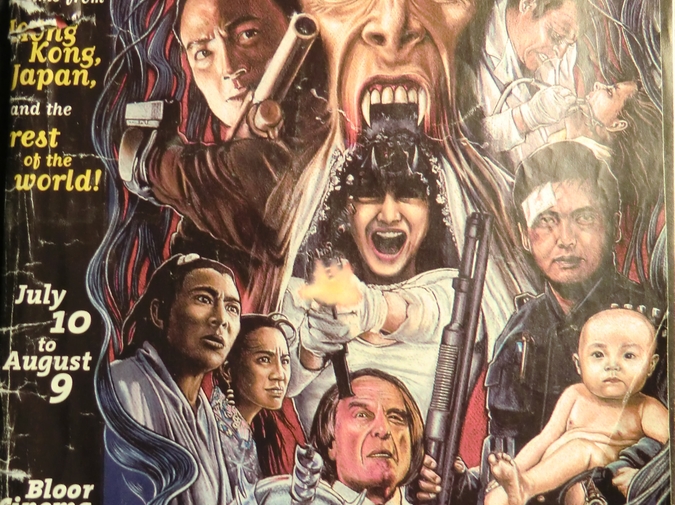 You used to have to seek the cartridge. You borrowed your way there however necessary. Thomas Video, Movie Mania, Mammoth Video, Showcase Cinema, Blockbuster Video, Hollywood Video, Family Video, etc. - vast peripatetic backdrops for the relic, each outlet with its unique selection and a cardboard placard of a trainee propped there to inform one’s palate, or, failing that, to be a uniformed receptacle for allowances. It was a misanthropic endeavor because the focus was on objects meant for a perusal against logic, the logic pressing play extinguished, the now muted turbulence all around you that could never be scripted. You spanned an emporium to find your flick and the fucking weight of the box that contained it maximized the fetish. The impulse toward box art, the random capturing of your lust and apprehension, the palpable sleaze of possibility, less like having rabies in a candy store, more like entering someone’s house when they’re not home. You ripped the teeth out of the clunking ribbed plastic and held aloft the heavy, book-thick video. The feed racket of the VHS machine digesting art for display cranked your endorphins with a copulatory robotics, like throwing heroin at a gerbil, load the cannon, the cartridge meant to delete your frontal lobe (Kitano’s Boiling Point). You were ODing on rapturous solitude. No religion could be paused (fat white lines lacerating the image) for bathroom breaks. Giant guidebooks cataloged the players by genre. Someone capable of introducing unfamiliar titles to you held a reluctant value, even if you didn’t like them, and you learned to hold off hating certain people because information back then had an inaccessible conjecture to it. They took you hostage via shared obsession. I read in the local paper about a French film featuring a pregnant belly being stomped, and tracked it down for five years. You used to wait years before your movie was available. I contacted the distributor to see Gaspar Noe’s first film, not long before the New French Extremity reinvented video nasties. Previously, the furthest you could go was: Salo, Men Behind the Sun, Guinea Pig, Tetsuo, Necromantik, In a Glass Cage, Holy Mountain, Cannibal Holocaust, I Spit on Your Grave, Clean, Shaven, Combat Shock, Henry: Portrait of a Serial Killer, Possession, Lynch, early Polanski, Cronenberg, etc. – not counting various bootlegged Mondo Kane / Faces of Death rip off real footage animal slaughter snuff horror shows. Angst was the lost legend (he destroyed his life with debt to make it and disappeared from the scene) I read about jointly in its first reemergence at the Fant-Asia International Film Festival in 1998 and in early interviews with a much more, at the time, mean-spirited Noe. Fifteen years later, beyond the excitement of Cemetery Man’s delayed release, beyond tracking down all the nebulous Demons sequels (knowing it was the mysterious metal mask character who directed Cemetery Man), beyond stumbling upon a softcore porn company's tribute to Repulsion, Deranged, a surprisingly well done homage felt made for me alone, beyond finding both Tsui Hark’s The Blade and the John Saxon zombie schlock Cannibal Apocalypse in a pawn store / jewelry store / video store in Detroit, accompanied by the intense reek of asbestos, I finally tracked Angst down on YouTube, holding a printed out translation next to the screen. I will never fully hate the age we’re in because you can find what you need faster, and it’s about the meat, not the hunt, but the glee of discovering a video box, jogging to it, hoping it isn’t checked out, has vanished, so be it (Crawlspace). The Eyes of My Mother was hyped enough so that if I had to stalk it for more than a year, I’d have been a little miffed. It’s light, in no way gory or intense, smart beyond many, produces a vibe of abject terror somewhere on the median - something like The Poughkeepsie Tapes (raising her stump), and is adept enough to elicit an ounce of the most abject moment of brilliance in cinema: the ending of Twenty-Nine Palms. I won't feel I've fed any of these digital machines something palpable until I am rolled into my crematorium.