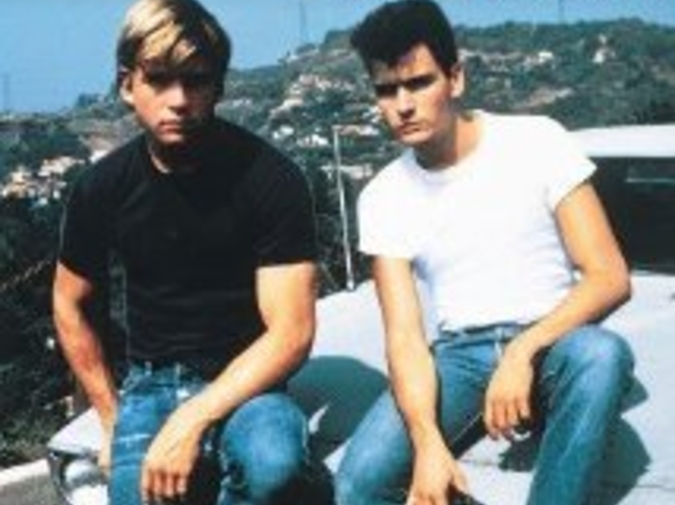 Penelope Spheeris’s proto-Columbine masterwork of the existentially bonkers, The Boys Next Door, concerns the radical dangers of unchecked jissom turning fluent within dudes. This  petulant concoction of dick has a Charlie Sheen and a young psychotic buff lad, somehow of John Ritter resemblance, the most expired eyes of a John Ritter, flipping out total blond and brunette loser pal road trip butt munch style and going 80s rampage at their sperm. Spheeris’s punk flavor turns a lot of real nice empty out of its decade. They’re that ostracized whitehood dangling with gnarly hatreds, tossing forth sexy hickness, no expellant under the cool. They might be less racist if they could simply ejaculate, but I like to generalize everyone’s semen as its own little Aryan mistake. Cream sodas and SSI, their rejection gives them sight, their inability to blend pulses, tensions prompted for the mega sublime, like when Ritter (I want him to be John Ritter, a frightening John Ritter, John Ritter, anyone remember Real Men as an intentionally absurdist masterpiece? It’s between the lack of laughs, the, I suggest, intended fuck you stopgaps, the decadence above context – the last silly avant retro stylists are dying out, dying of their worthless cum, for instance, and good for us, hope I’m soon) sees a random attractive female and says: “Look at that bitch. I bet she doesn’t even exist.” I can’t call myself a writer (or man and try for neither) with the use of that moment being someone else’s. Layer by layer, his line is a metaphysically cockeyed wrong-ass goof, dumbly evil sassy no-no, babydick solicitation, an erectile dysfunction of a line that may help us study the classics instead, unfortunate, fortunate, tingly upstairs, direly righteous, and frustrated with so much misplaced hate you have to imagine yourself sexlessly priestward and tighten every strain of muted sadness around the fucking unobtainable vowels in the word “exist.” Muscle the word under you and cry till you can’t pretend. I’m saying my man says “fuck the world” like he knows me. But he’d actually fuck it, my friend. You know they left their astrology on the carpet before anyone could offer sympathy. Even a pouty new wave cop follows suit, jacket slung over shoulder in catalogue stance. Spheeris just spat on your dismissal. They make like statues and the police run past them, alright? You ain’t spoof free either, so eat my fuck, dismal twerp. With your fucking purposefully undid shoelaces. Note to critics: your penis is never bigger than your complaint. Every movie inspires us into jail or isn’t done.