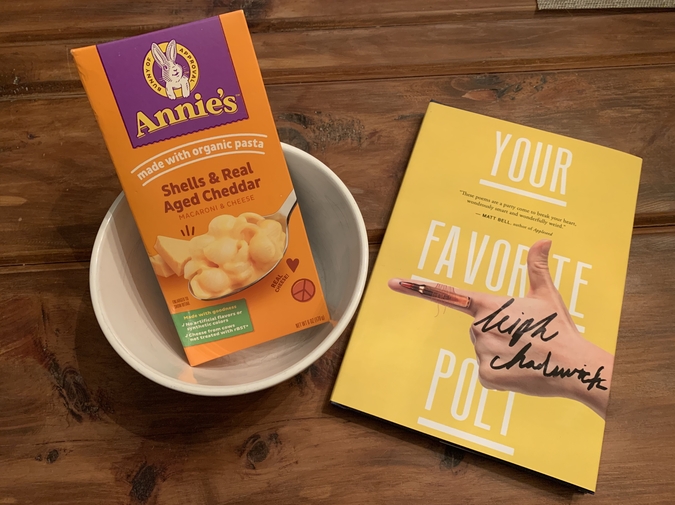 You’ve heard of Leigh Chadwick, of course. She’s a force of nature, a clear, true Twitter voice, even your favorite poet, perhaps? She’s a writer whose poetry combines form and imagery in unique, intentionally uncomfortable, often extremely beautiful (sometimes so very ugly) ways. She’s a poet who speaks to violence and loss, and fear of loss, in a way no other poet does right now. Highly prolific, publishing all over, Leigh’s new collection Your Favorite Poet is out now from Malarkey Books and making waves. As Leigh is want to do.

Now tell us about Your Favorite Poet!

Your Favorite Poet is my debut collection of poems that was just recently released by Malarkey Books. At times, Your Favorite Poet is (justifiably) cocky as hell. The collection is mostly about Leigh Chadwick, which is a good thing, because, well, it’s Leigh Chadwick. But Your Favorite Poet is also a very sad book. I started writing it right after the birth of my daughter (she’s coming up on her second birthday), and I was struggling with thoughts related to mortality and generalized worry. What came out of those feelings is a book about gun violence, my struggles with religion, and my fear of how to keep my daughter safe.

Your Favorite Poet is a book I am desperately proud of, but also one I wish I didn’t feel the need to write.

Also, on a less crushing note: What is your favorite snack or meal to make your daughter?

I’m struggling with how to answer this question. I know I tried to add some levity in the middle, with the hope of being able to give the reader a beat or two of optimism, something lighthearted, but I don’t know if I was actually successful in doing so.

All I know is that I am emotionally worse than when I started the book. And as my daughter keeps growing, my fears keep expanding.

And now I can’t stop thinking, Will they come for the daycares next? It’s a constant haunt.

On a less crushing note, snacks! Luckily, my daughter is pretty easy when it comes to snacks. Give her any fruit or some baby carrots, and she’s good to go.

If Your Favorite Poet was a metaphoric recipe, what would the ingredients be?

8 cups of a midafternoon orgasm

That Thursday by the lake

Dropping your phone down a sewer grate

A red cape lost in the wilderness

A fire extinguisher in your back pocket

Did you...did you just include 4 teaspoons of fluffy storm clouds?

Yes. Is this uncommon?

And how about an actual recipe? Something you love to make and eat, and feels like your book?

From the side of a box of Kraft Macaroni and Cheese:

1. BOIL water in medium saucepan. Stir in macaroni: cook 7 to 8 min. or until tender, stirring occasionally.

Note: This is the classic prep recipe.

Let’s talk CRAFT. What do you eat obsessively while you write?

Whatever is closest to me. Also, I know you don’t eat iced coffee, but I have a bad habit of absentmindedly chewing on the ice, so I feel like that counts.

Okay, here’s where I usually ask about your book being sold to big, fancy film execs. But this is a strange, beautiful book of strange, beautiful prose poems. It’s highly visual, though! Can you imagine it in film form? If you could picture the perfect screen adaptation, in the perfect vignettes, with the perfect cast – what would that look like? Which actors would you choose and what snacks would you feed them to keep them at peak Leigh Chadwick energy?

First, thank you for calling my book beautiful and strange! I love that you felt that way about it.

As for actors, Anna Kendrick would play me because Anna Kendrick should be in everything. As for my husband, he would be played by a different actor in each scene. At the end of each scene, each actor would be fed versions of their younger selves.

Let’s get personal. What food or dish represents the real you, underneath the writer’s mask?

How do you take your literary coffee? Cream and sugar? Black? Egg? (I just discovered egg coffee yesterday, and I'm confused by and obsessed with it.)

Rumor has it that Malarkey is publishing another collection of yours soon! Tell us everything!

Yes! Malarkey Books will be publishing my next solo collection, Sophomore Slump, in the fall of 2023.

At times, Sophomore Slump feels more like prose than poetry. I’ve removed all the titles and there is a narrative to the collection, but individually, they most likely resemble more prose poems than pieces of flash fiction.

What's the difference between prose and prose poetry for you?

I want to say something like, When you know, you just know, but I feel like that’s a cop out. For me, it’s kind of simple (and most likely wrong, and also probably a cop out): If I’m writing a piece and it goes over a page, I’m no longer writing a prose poem, and I’ve begun flirting with a short story.

And yes, this would mean I published a poetry collection that has, off the top of my head, at least two pieces that are absolutely fiction—there’s probably an entire section where you could argue the work is prose—but I don’t care. I wanted to include them anyway.

What are you working on right now?

Currently, I am finishing up final edits with Adrienne Marie Barrios on our collaborative collection Too Much Tongue, which will be released by Autofocus this December. It’s a slim collection, hybrid in heart, a mild breeze, a late-night haunt. You will love it.

Give us the scoop! Give us DETAILS!

All of the poems in Too Much Tongue are written in third person and are based off two people named Leigh Chadwick and Adrienne Marie Barrios.

The collection came together very organically. When Adrienne and I decided to write a couple poems together, we didn’t plan on making a book. I don’t think we really planned on anything, which is maybe why it worked out so well, because before we knew it, we were basically sitting on enough poems where it only made sense to add a few more and turn it into a full-length collection.