Stir It Up: DeMisty Bellinger talks recipes, snacks, and her two new books 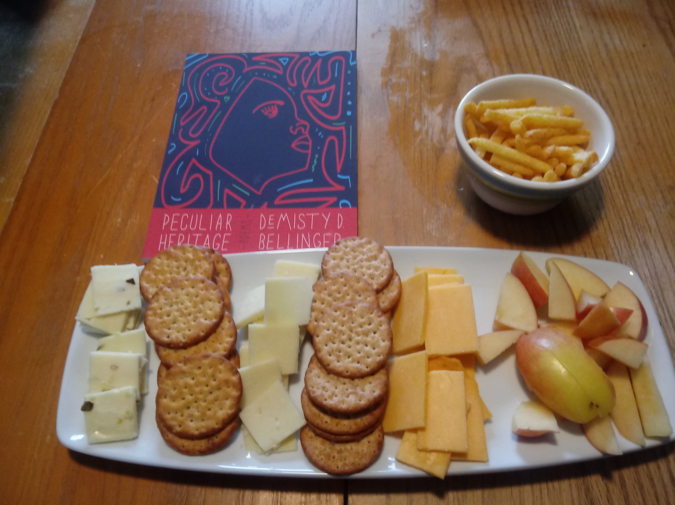 DeMisty Bellinger is the rarest of writers: the poet-novelist. She edits poetry at Malarkey Books and Porcupine Literary, but she’s also known for her incredible prose. (Despite what you read later in this interview, she’s well-published in both nonfiction and fiction!) I may have once nominated her for Best of the Net for short fiction, as well. Plus, I loved her poetry collection so much that I’m making my university students read it this spring. My obsession = their homework.

So, I was deeply pleased to have the opportunity to discuss poetry, novels, and even more importantly—food—with DeMisty.

DeMisty Bellinger: I have a weird conglomeration here today: smoked cheese, dried mushrooms (BBQ flavored), cheddar and sour cream Cheez-It Snap’ds (don’t judge; I only have a little bit), and a couple of slices of Tofurkey Peppered Deli Slices. I don’t know if this is a snack or a lunch.

Here's where I usually ask about your book, but you have two books (!!) to tell us about: Peculiar Heritage (out in 2021) and New to Liberty, which comes out this year! For the record, I think it should be illegal to be both a poet and novelist and to be SO GOOD AT BOTH GENRES.

Peculiar Heritage is a response to the continuing racism, sexism, and hate that comprises our country and its politics, but also, the hope that we can all evolve from a country birthed in white supremacy to one that embraces true diversity and freedom. Along with the hate and oppression of our country’s early years was the hope for freedom and sovereignty. We have the potential to get to that ideal, I think. And there are love poems, too. There is always love!

New to Liberty is a historical novel in three parts following three different women while they learn to define themselves and reject societal expectations. The book addresses racism, homophobia, and class in the early half of the 20th century.

If Peculiar Heritage was a metaphoric recipe, what would it be? The ingredients, the process?

I’m going to give two answers: a metaphoric recipe and a recipe with some nods to the ingredients:

Mix all ingredients. Roughly shape it. Put it out in the sun to dry. Hope for the best. Offer compromise. Love it by trying to improve it every day.

American Goulash (recipe two) (a recipe that’s kind of sweet, kind of salty, kind of hot, and as American as it gets)

1. Fry the hell out of the onions in olive oil. Caramelize them. Stink up the house in a good way. When they’re almost done, add the garlic.

2. Meanwhile, boil your potatoes in salty water until al dente or softer.

3. When onions and garlic are done, add a little wine and scraped the bottom of the pan to deglaze. The add potatoes and corn. Add one TB of butter. Season with salt and other spices and herbs (I like paprika, parsley, cumin, oregano, cayenne, and other stuff. I’m very generous with everything.) Also, add a pinch or two of brown sugar.

4. Chop or slice the squash and add that, too.

5. When everything is almost done (soft—you want the potatoes hashbrown soft and golden), add the tomato.

6. Cook’s secret: add ½ to 1 TB of butter or whatever fat you choose, and finish with a final flourish of salt and pepper. Serve hot.

How about for New to Liberty? What's a recipe that you love that embodies this novel?

Hmm. New to Liberty is set in Kansas and it’s hard to not think about bar-b-cue when you think about this state, but as a vegetarian (who likes bar-b-cue), I’m going to steer away from that right now. Kansas is also known for its pies and German foods, like Bierocks.

But, since sunflower fields were the catalyst for this book, and since I have a nut allergy and would rather go for sunflower butter instead of peanut or any nut butter, I’m going to give you a sunflower butter recipe from SunButter: https://sunbutter.com/recipe/classic-sunbutter-cookies/

The all-important CRAFT question: What do you eat while you write?

It’s so hard because I’m trying to cut down! Potato chips and or fries. Vegan gummy candies. Cookies.

What's a food you can't resist? A food you hate?

I hate nuts, of course, and I don’t like meat, but I don’t hate it; I just won’t eat it. I’m going to go with aspic because ew, who thought it was a good idea to gel up tomatoes and serve it to people? Why? Ew.

Every writer's dream: our novel made into a movie! Who would be your dream cast for New to Liberty? AND pair each person with what you think their favorite snack is?

Oh no. My lack of pop culture knowledge is being revealed! Okay, there are three main female characters, so I’ll concentrate on them. Here goes:

Sissily is a nineteen/twenty-ish old woman who may have some sister in her. Actress Zendaya could play her role, and her favorite snack is probably carrots or popcorn.

Marsai Martin would make a perfect Nella. She exudes spunk and courage, which Nella has in the book. I hope Ms. Martin is a hot chips kind of girl because I can see her enjoying a bag of something spicy and tangy.

Greta is a little older, wise, and also brave. She figures out what needs to be done and does it. She’s a hard worker, a strong woman, and beautiful in a farm woman type of way. Shannon Purser would be perfect. I hope she’s like me and is a cookie monster.

What's next for you as a writer? (If you say an essay collection, I'll die, actually DIE.) And what are you making for dinner tonight?

Oh, I’m so horrible at essays! Whenever I publish an essay, I surprise myself. I’m working on another collection of poetry, this time mostly ekphrastic poems. I’m also working on a multi-generational novel grounding in a Voodou-esque religion.

I think I want a big salad or some roasted veggies tonight. Maybe I’ll be a rebel and have both! I may make biscuits, too. It’s too early to know!