Stir It Up: Aileen Weintraub talks food, pregnancy amidst the chaos, and her new book Knocked Down: A High-Risk Memoir 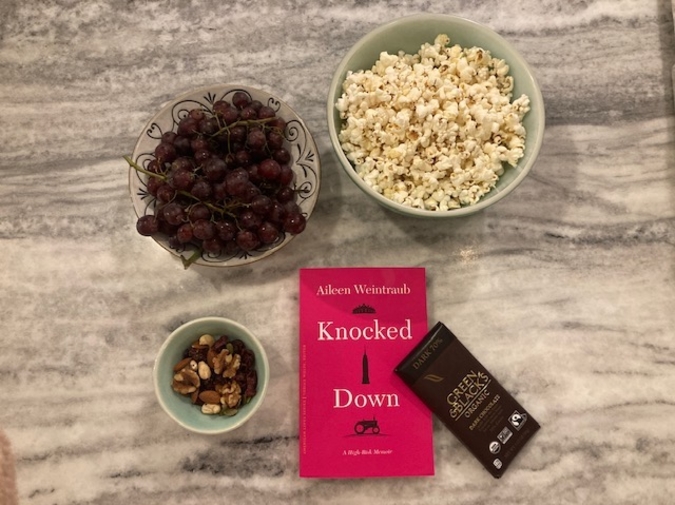 Aileen Weintraub is one of those incredibly funny writers who also has that superpower to make you cry against your will. You may have read her pieces about pregnancy, motherhood, aging, and more – from her viral Huffington Post piece “This Is What No One Tells Women About What Happens To Your Body in Your 40s” to pieces at NBC, Glamour, and Al Jazeera. She’s an expert in humanizing some of the hardest things about being a woman, which seems to piss off a certain rabid population of men. But it’s what makes the rest of us humans love her all the more!

Aileen Weintraub: I already love where this conversation is going. First, I have to confess that I am the official snack lady among friends and family. Hungry? I’ve got options, and they all somehow fit in my purse.

So far today, I’ve been trying to keep my energy up, so I’ve got a small bowl of macadamia nuts on my desk and a bunch of lovely, delicious purple grapes, which incidentally play a defining role in my memoir, Knocked Down. That’s where my story starts, over a bunch of grapes in the produce section where I meet my future husband.

Tonight, after the kid goes to sleep, I’ll make myself a bowl of popcorn with extra butter and salt and share it with the dog, which is why he loves me best.

Now tell us about Knocked Down!

Knocked Down: A High-Risk Memoir is my story about being a commitment-phobic Jewish girl from Brooklyn who moves to the country and ends up on pregnancy-related bedrest for five months in a rickety farmhouse. As the farmhouse begins to collapse, and my marriage starts to do the same, I finally come to terms with my father’s death, all while fighting for the survival of my unborn child. And now I have a decision to make. Do I stay, or do I once again run away from it all?

If Knocked Down was a metaphoric recipe, what would the ingredients be?

4 drops of crocodile tears presented in a crystal vial

Wait, I hope that’s what you meant by metaphorical. While writing Knocked Down there were so many times I wanted to give up, hence the despair, but I knew I had an important story to tell, so I kept writing through all the noise and rejection. I guess you could say this book has been simmering for almost a decade, but that sweet taste of joy and success upon publication made it all worthwhile.

Knocked Down has a lot of associations with food, which is ironic since I could barely eat anything during my high-risk pregnancy. I had gestational diabetes, so all carbs were out. I was also a vegetarian, so that limited my options, and I had heard something about cheese and Listeria, so dairy wasn’t a big part of my diet either. But when my mother would come up from Brooklyn to visit and take care of me during my five months of bed rest, she would take over my kitchen and cook so much food. There is a scene in Knocked Down where she schleps a suitcase filled with meat up on the bus from Port Authority in New York City to my Hudson Valley home. Then she proceeds to make meatballs and brisket, and whatever else she can think of because this is how she shows love, even though I wasn’t going to eat any of it. There’s a chapter title in my book called “The Whirling Dervish and Her Magic Meatball Sideshow,” and it’s one of my favorite chapters in the book. I don’t know my mother’s secret meatball recipe, but I would say that any big pot of meatballs would go perfectly with Knocked Down.

Growing up, my father, whose death I was finally forced to come to terms with while on bed rest, used to take us out for dinner on Saturdays to an Italian restaurant in Brooklyn called the Genovese House, and he would always order baked clams for me and my brother. It’s very rare I get to enjoy them these days, but sometimes my brother and I will go out for dinner and split a dozen just because it feels like home. Kathy Biehl talks about the cellular memory of food in her book, Eat, Drink, and Be Wary, and this idea of food as memory really speaks to me. We can find so much comfort in smells and tastes that bring us back to childhood.

Let’s talk CRAFT. What do you eat obsessively while you write?

I eat crunchy food while I write, and I can’t believe I’m admitting this, but I will sometimes stand in my pantry after writing a particularly difficult scene and shovel chips or pretzels in my mouth, which I’m sure is totally not the way we are supposed to process trauma, but it seems to do the trick.

What about when you were stuck on bed rest, and trying so hard to write through that ongoing trauma, the layer after layer of hard things. Did you have to find a crumb-free alternative?

I didn’t write this Knocked Down while on bedrest but I did write journal entries that would later become the premise for the book. I was in so much pain, and my diet was so limited, that I lived on cashew nuts and baby carrots, small amounts of cheese and ginger tea. I really enjoyed cheerios and milkshakes until I was diagnosed with gestational diabetes.

Did you think those journal entries would become something else? Or was it just to write, just to get it out?

It was so difficult to write while on bed rest but I wanted to keep at it. I was working on another book at the time and would write small tidbits here and there. The journal entries were a way to keep me connected with the rest of the world while on bed rest. I would write two or three lines about my day, often finding humor in the otherwise mundane, and then send it to friends and family as a way to reach out. I wouldn’t process the trauma of these events until years later when I set out to write Knocked Down. I had pushed it down for so long, just trying to get through each day until I finally decided it was time to give it light and space in the world

Okay, if Knocked Down gets optioned, which I fully expect it to, let’s talk casting! Give us your dream cast (including who plays YOU) for the show or movie, and pair each person with what you think their favorite snack is?

As my Jewish mother would say, from your mouth to God’s ears. We can only hope Knocked Down gets optioned. I think it would make a great Netflix series based on the quirky characters alone.

If I had to choose someone to play me, I would have to go with a female Nathan Lane. I don’t know who that would be, but Nathan Lane has a unique way of portraying serious emotions and devastating humor all at once. That is something I worked hard to accomplish in Knocked Down. I would say Sarah Silverman would be a good runner up. For a snack I would choose my mother’s kugel, which is basically any type of food you can put in a casserole dish.

For my husband Chris’s character, I would choose Adam Driver. My husband eats pretty healthy, so I’d serve him some of those fancy mixed nut trays and sliced pears with local herb infused goat cheese and rosemary crackers.

Mandy Patinkin would be the perfect actor to play my father, and I would have to choose kettle potato chips with egg salad because he did this great Tik Tok video of his ten favorite snacks and that was one of them. Also, Matzah with butter. I think my father would enjoy those snacks as well, though he would probably choose sardines instead of egg salad.

For my best friend Watson’s character, Jason Bateman would be a good choice. I’d have to get some really delicious local perogies from the perogy lady in our small town. She already has a waiting list, so I can’t tell you who or where she is. It’s top-secret information, but trust me, you’ve never tasted anything like them.

Finally, for my mother’s character, I’d have to choose Sally Field and her snack would be rugalach, which are chocolate or fruit flavored cookies.

What’s next for you, in terms of your writing?

Right now, I’m focusing on making sure Knocked Down is a success, and part of how I’m doing this is by continuing to write about ways in which we can facilitate change when it comes to women’s reproductive health. I’ve heard so many stories from women about how they don’t feel seen and heard by the healthcare community, and I’d like to use my voice to promote advocacy.

I wrote Knocked Down in part to help women feel less alone as they navigate the trauma of high-risk pregnancy, and I want to continue doing that work. Check out my website for some pieces I’ve written about how we can change the conversation. You can find out more about me and read my work at www.aileenweintraub.com or join me on Twitter @aileenweintraub.