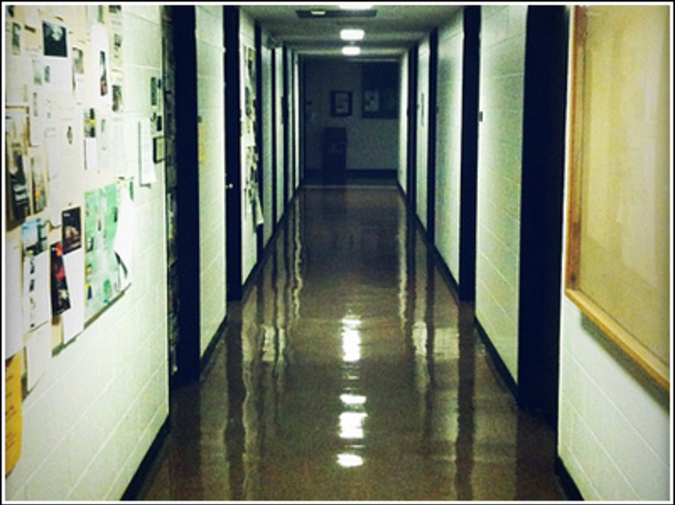 A few minutes till closing on a Friday, a kid still in the library, no parent with him, too cold out for him to walk home if he lives any distance away, no coat, only a thin jacket over his shirt. I ask him how old he is, twelve, ask if he needs to use a phone to call someone to pick him up, tell him about the library policy that we can't leave children under fourteen unattended after closing. He's okay, he says, doesn't need to call, his father will come for him. I ask when he expects his father, we're closing at six, when does his father think we close? Nine, he says, and then I explain it to him. We wait twenty minutes and if he's still here alone we're required to call the police, who will take him to the police station and call his parents. You might as well call now, I say, you don't want your father going to get you at the police station, do you? He's still hesitant to use the phone, seems afraid to call his father, but he goes to the reference desk with me as the closing announcement is made and a few stragglers head for the exit. I tell the staff I'll wait with the kid, but one other person has to stay according to the policy and someone volunteers to work in back until his ride shows up. He punches in his number and turns his shoulder away from me. I give him some space, I don't mind, his clothes are dirty, he's dirty, and he stinks. Someone comes on the line, and he begins to speak in a language completely unfamiliar to me. I hear a man's voice on the other end yelling at him, and when the kid uses the word "police" the yelling gets louder. He mutters something and hangs up but doesn't look at me or say a word. Is he coming for you? I ask, and he nods and slouches toward the front door. I go with him, overtake him in a few steps, he's shuffling his feet, his mouth is working as if he's trying to talk to himself but can't think what to say. Will he be here soon? I ask, and he mumbles that his father should be here in ten minutes or so. We go to the foyer. The policy says he shouldn't wait in the building after closing, but it's too cold to put him outside and how do I know when his father will show up? He paces, breathes heavily, looks out through the glass doors. Ten minutes, no father, fifteen minutes, no father, so I tell him that if another five minutes go by I'll have to call the police. Does he want to call again to see if his father's on his way? No, he'll be here, he says, and he seems determined not to use the phone again. Then he sees him coming in an old car that streams exhaust, the engine rumbling. The father turns left into the parking lot and stops as far away from the front door as he can and still be in the parking lot. The kid pushes the door open and goes out into the cold, breaking into a trot, and as he nears the car his father pulls up to the entrance, straight in front of me, leaving the kid behind. The father is looking into his rearview mirror, shouting as if the kid can hear what he's saying. The kid comes toward the car, exhaust in his face, his shoulders curled up, shivering inside his flimsy jacket. He gets to the car, reaches to open the passenger door, but his father puts the car in reverse and hits the gas, yelling at him as he backs up, his mouth moving fast. The kid starts for the car again, and his father leans over the steering wheel and shouts at him, the kid lowering his head to avoid the spectacle. I'm tempted to violate the section of the policy that says I should stay inside the building. But if I go out there, what will happen? Will it help the kid? He approaches the car warily and extends his hand toward the door handle and takes it back, fearing the car will lurch when he grips the handle, perhaps dragging him forward and knocking him down. The car stays still and the kid opens the door and jumps inside, not looking at his yelling father. The father smacks the side of his head and pulls away, engine struggling, trailing smoke behind them.

Glen Pourciau's short story collection, Invite, was published by the University of Iowa Press. He has stories in recent or forthcoming issues of The Antioch Review, Freight Stories, New England Review, The Paris Review, and TriQuarterly.