Polyester in Odorama / The Room with Tommy Wiseau in person 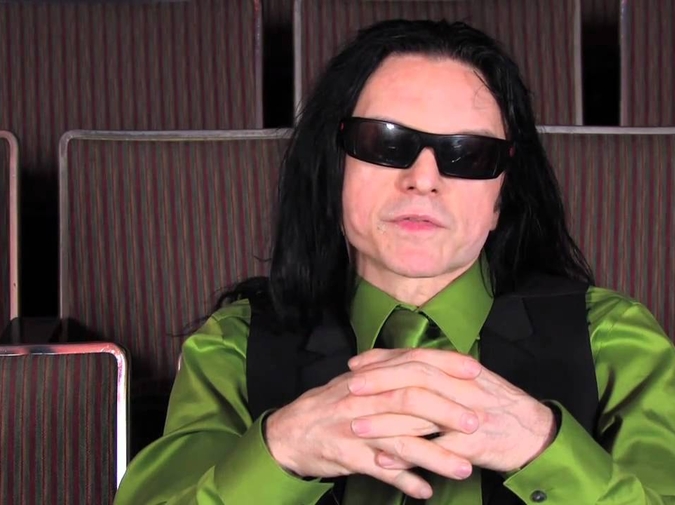 The Room is a found echo of what Waters already perfected with much craft. People shy away from anything written, not that Waters is unwatched, yet our big plaid reality fetish, timing out the word art so it can only ever feel like fucking a slipper, has packed camps of camp back into the worthless world. Tim and Eric’s curation of The Room is its genius. When this fiscally domineering man with his stroke dialogue assembled from the languages of every country at once is pelted by utensils in a shared jeer, he is not the director of anything but a hilarious cultural fluke, and it is always okay to be cruel in the arts, whether people like him are in on it or not, because who cares, internet (hey internet, how do I take a selfie of my fucking concern for others?), but Waters carried this kind of batshit melodrama to its hysterically and intentionally constructed height with undeniable genius over an amazing career. I’m not saying Wiseau has no art because I’m not evil enough to take that away from anyone, though I do admire a lot of crimes, The Room, a film that works despite itself, being one of them. Polyester just works, a balance between Waters’s earlier onslaughts of lunatic joy and a more mainstream stripping, before things got too musical and remade. The leads in these two films are absurd martyrs trapped in and dying out of the man / woman mistake at volumes past eleven. Audience participation is as fun as your venue’s clientele and by that I don’t mean numbers. The crowd of ten thousand screeching hipsters attending The Room at the Main Art stepped all over the amusing procedures involved in watching that film. The spoons, the football, the mimicked lines were so massively slammed the film disappeared for long periods, parodied by a parody of its parody. Wiseau whipped up the masses beforehand and some hipster girl in her excitement made the mistake of conversing with me unprovoked. I clamored in vain, in social lack, oh hi, coy beluga, for a number, not your typical exchange, and was then, of course, introduced to an equally tiny boyfriend. We three spooned into the disavowed strata, resenting friendship and all culture, especially the fact that our hope could still be very rarely tickled, like some violated bankers. Polyester at Cinema Detroit had the original cards you scratch with foot smells and a sizeable, good crowd. They used to be called The Burton Theatre, a dead school in Detroit’s Cass Corridor with the gymnasium converted into a showroom, the best collective of cinema punkers Michigan has seen, where Crispin Glover conversed with you, where you went to see Trash Humpers, Taxidermia, the new Breillat, giant pussy sculptures and grocery bag spider webbing knotted from the urinals to the concessions – but some pseudo-generous landlord, some rich ex-hippy who rides a toy train, some piece of shit businessman in denial of his artlessness, chucked them out the second it got too noticed, and took it over, renamed Cass City Cinema, you yuppie cunt, and showed the worst assembly of out of touch, twilight years puffery ever massacred across anyone’s analgesic. Luckily, he got bored with that toy, this conductor of my feces, spinning his imperial ticker tape on a baby dick halo, and the Cinema Detroit people seem okay. They let the air conditioner rattle a bit through the whole film. It’s all right. We used to sit sweating off summer at The Burton while Wolf Eyes scored Haxan is all.