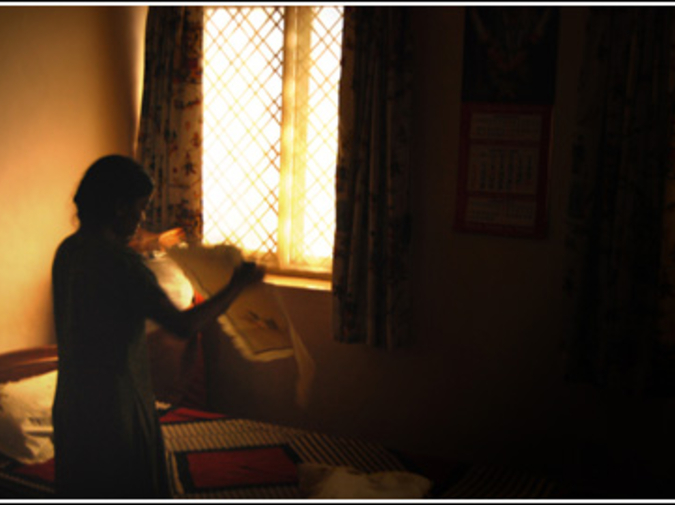 My sister found a baby goat in the bathroom at McDonald’s last night.  It was right after closing and it was just Melissa and the assistant manager, a shaggy-haired guy named Kyle who was stoned half the time.  Kyle looked in the official Workplace Procedures Manual, but there was nothing in there about baby goats or any type of farm animal that hadn’t already been slaughtered and pressed into a patty.  So Melissa called me and I drove the five miles to McDonald’s even though it was past midnight and Katie had just taken off her dress.

She had a tattoo of a dragon curved around her left hip.  It looked ready to bite.  I kissed her neck and promised an expensive dinner and tickets to see the Dave Matthews Band.  She said she’d wait until one but then she’d be gone.

Melissa and Kyle were by the door when I arrived.  The baby goat stood by the front counter.  Kyle had filled a napkin with leftover French fries and onion rings and had laid it on the floor.  I felt bad for the goat—all that grease—but the baby goat ignored the food and nibbled on the napkin instead.  Little shreds of paper hung from its chin.

“What should we do?” Melissa asked.  As her older brother, I was supposed to know everything.  I checked my watch.  I had forty minutes to get back to Katie if I still wanted time with the dragon.

I looked at the goat.  “Any idea how it got here?”

The goat made an odd, bleating sound, like a bird with a sore throat.  It was too late to call Animal Control.  I suggested the police.

“No, they’ll shoot it or Taser it or do something authoritarian,” Melissa said.  “I think this goat is a sign.”

Lately Melissa found significance in almost everything.  If you called her at 4:13 she’d write down the numbers and spend the night spinning and twisting the digits.  She’d add them, multiply them, divide them by pi, then vow to atone and start changing her life.   For almost a year now she’d been living in my apartment, ever since her boyfriend had split, leaving behind six months unpaid rent that Melissa was still struggling to pay off.

“Are you suggesting we keep it?” I asked her.

How do you expect to take care of a baby goat? I almost said, but stopped myself.  I had said something similar once before.  I’d even driven her to the clinic and paid for the procedure.

“Maybe it’s like a famous goat and there’s a reward for it, like a million dollars,” Kyle said.  “Maybe it’s Angelina Jolie’s goat, maybe she adopted it from Africa, and we’ll get to be in her next movie.”  Melissa and I ignored him.  “I’m just saying,” he shrugged.

Melissa sat on the floor beside the baby goat and stroked his tiny head.  When we were kids she’d once brought home a kitten from a friend’s house.  She spent hours with that kitten, the two of them buried beneath a mountain of blankets on the old sofa in the basement.  For a week they were inseparable until Dad got pissed off about God knows what.  We never saw that kitten again.

“I think he needs me,” Melissa said.  The goat rubbed his head against her knee.

I had thirty minutes until Katie and her dragon would vanish.  Kyle dangled a set of keys and fingered the light switch.  “The goat is cool and everything, but I need to lock up,” he said.  He looked at Melissa.  “We already clocked out.  This is like working for free.”

“We could tie him to a tree in the parking lot and come back in the morning when the animal shelter opens,” I said.   The goat bleated.  Melissa kissed him on the ear.

We made it back to the apartment with five minutes to spare.  Katie was on the couch, her long legs draped over the cushions.  The dragon smiled.  Then Katie saw Melissa standing behind me, the baby goat wrapped in a sweatshirt and cradled in my sister’s arms.

“What the hell?” Katie said.

Katie pulled on her dress and grabbed her keys.  Goodbye dragon, I thought.  The baby goat said “Baaah” as Katie walked out the door.

I heated some milk while Melissa sang Bart a lullaby about cradles and tree tops and lost baby goats.

It was 1:28 when Bart finally fell asleep.

“Look, one-two-eight,” Melissa said.  “Add them up and it equals eleven.  Add the letters in Melissa and Bart.”

Chuck Augello lives in New Jersey with his wife, dog, three cats, and several unnamed birds that frequent the back yard.  His work has appeared in decomP, Word Riot, Pindeldyboz, Pure Francis, Rattle, The Santa Fe Literary Review, and other journals.  Stories are upcoming in Muse & Stone and The Dark Comedy Review.  Contact him at beatleduck23@yahoo.com