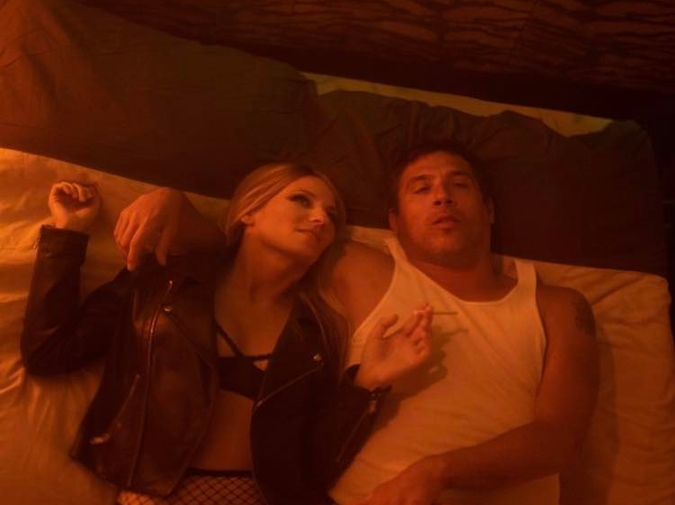 I didn’t see much art in that

He stood in the door, his foot propping it open,
Smoking cigarettes and thumbing his phone instead

It was almost Xmas morning by the time I called my husband from the car on my cellphone:
“Please come help me, I have to pee”

there weren’t any Balenciaga clothes for me to try on
the house was 900 square feet;
We parked in the drive

Someone on twitter said Julia Fox was an artist because she was
Writing about her experience as it happened; “Genius”

I didn’t reply to the text; didn’t make the call

I bought my own Balenciaga dresses
I didn’t snort Adderall

On Xmas evening my new husband yelled again
He bellowed beautifully at me from the top bunk of his son’s bed
I left his house at 11:30 pm, almost 24 hours to the minute I’d left my car
The night before

I drove the hour home, my dog in a crate in the back,
Drank and smoked cigarettes in the basement
Same shit, different husband

No one from Interview magazine wanted to interview me

This is my art.

Three months later we are in a metro park north of Detroit
Me in my REI snowpants, you in garments you normally reserve for hunting
Shuffling over the ice, hand in hand, to inspect what you tell me are muskrat dams

You say honey this and honey that
Pulling me forward, crouching us down beside the twigs
And my eyes are filled w hearts
My brain done remembering
Only here in the present metropark moment w you
My (third) husband

And no one understands
I don’t even try to explain

Birds land on our hands,
Palms flat and raised uncomfortably above our heads
To peck at the seed that cost a quarter from the machine they installed
After realizing so many ppl were bringing seed from home in plastic baggies

Later this week I will watch as a woman in a popular Netflix show tells the show’s protagonist:
“It takes on average five tries for a woman to leave for good.”

Earlier this morning, before driving to the metropark in my VW
(“Not a domestic automobile in the lot,” you are fond of noting outside Ann Arbor restaurants and convenience stores)
We fucked twice in my bed
You’d left work early
Your partner Jazz covering for you as you cover for him when he leaves the plant to go to the casino every other morning …

Another reminder you can leave at any time
Go to someone else’s house, trailer, manufactured home, bed
In Romeo or wherever (not Ann Arbor)

Instead, we are making masks out of avocado and coconut oil
In my kitchen
gigglingly spreading them over each other’s faces
Your hair in a tiny elastic band atop your head

Later I’ll cut it in my bathroom
Snipping pieces near your ear, on top,
Leaving the back long like a country singer’s
Like you want it

We’ll dance to David Bowie and Chumbawamba and The Proclaimers
In my bathroom
Fuck again before falling asleep, me spooning you after your arm
Starts to ache, holding me

I’ll just sleep
And at five a.m. when your alarm goes off
I’ll feel the old pain of parting
Of wondering where you’re leaving for
To the plant in Sterling Heights
Or a double wide in Romeo

It’s this pain, the familiar one, that is sending me to Ohio
My home state
A buckeye for luck forever in my purse

The state outline on a friend’s neck.

I can’t remember ever having seen Bukowski’s ass
Though I’ve seen Madonna’s plenty of times
In her Sex book she wrote abt fucking a teenager -
Fiction, but still

(art should make you cringe sometimes)

(It is a common misconception there is sex in Saul Stories)

We are all poets
In a way; those of us
Who jot words
On computers
Show our asses online and in art books and so forth

My last two IG poems garnered the ire of two men
And, indirectly, a woman

I think that bodes well - or whatever
For my ‘art’

For the record:
I’m not trying to make anyone seem like a cuck
Or anything
here

That’s never been what this is abt

I spend the morning googling your ex instead of writing
I find some old modeling shots
The cover of some auto magazine, 2004
American flag bikini, neon green American lowrider truck

This must have been before her breast augmentation surgery
Her breasts just look natural, nice

I find her Linked in
Updated to reflect the pandemic
Updated to note the death of  both of her parents, back to back,
cancer

I think abt our first date,
You showing me one of the pictures of her
In her bikini, on your phone;
you telling me she is a liar, you telling me more than I want to know
abt auto shows, liars

I find her Instagram, which hasn’t been updated in years
There you are in 2012, shirtless, holding a cat

“To tell you the truth, I can’t stand cats!”

Shirtless, on a couch
Smiling; next to her, on a boat,
Holding up a fish,
Matching sunglasses

Sometime between our wedding day, Halloween, and Christmas,
Your son says to me, “I don’t think my mom likes you”

I still have the text she sent me October 20th, saved on my phone:
“And you can call me, I’m actually a very nice person!”

Now you tell me everything I never wanted to know,
Abt auto shows, abt your ex,
“research” I no longer need (I’m not writing that novel now, or am i?)

She flips you off when we go to pick up your kid
Her smoking on the deck outside her trailer,
You smoking as you make your way around the car with your kid
“Oh, fuck me?” you say to yourself as you get in the car. “Okay.”

professional writing is not about self-expression, you said
you told me this in 2020
I didn’t read the email until almost 2022

who ever said anything abt professional writing tho anyway

another friend said, professional writing is an oxymoron

Megan Boyle wrote Liveblog sorta this way
Maybe you don’t think Megan Boyle is a professional writer either
Maybe you’re the only one making any $$$ around here, bro

Elizabeth Ellen is the author of the poetry collection Elizabeth Ellen, among other books. More of her recent poems can be found at Forever Magazine.