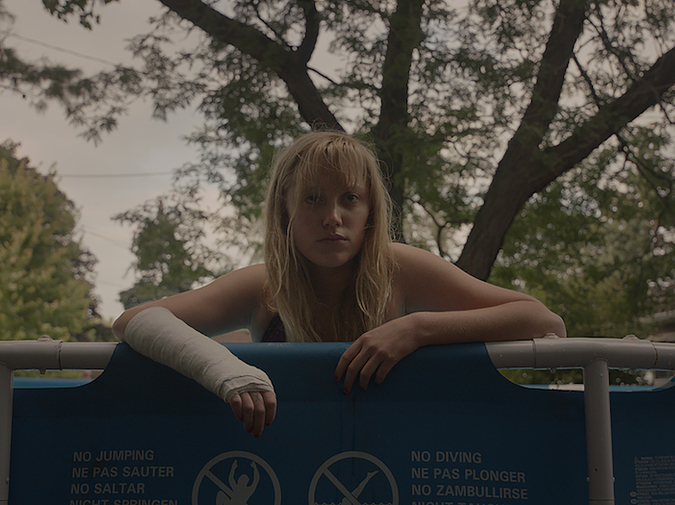 It Follows cousins Donnie Darko, but with an exceedingly venereal kinesthesia of terror. Its suburban melancholy looms less dulcet and the malice is even bluer lit. The switch here baits the hogs to again cry retro and now we must jog Carpenter’s bright name, especially bound against the unique and paralyzing score that accompanies this tour de force of the genre. Are the reviewers afraid of homage because it sounds French (and feels Japanese) or is everyone just a cunty post-millennial newspaperman? I get it, you are fluently stultified. This movie certainly mirrors my experience with copulation, scene by trepidus, tiptoeing scene. Who hasn’t disembarked from coitus, tromping outdoors high heeled to the camera’s aghast and superlative plunge? Writers’ work similarly tracks them down, or vice versa. For sure the ostensible illnesses and social blotching, unless you’ve taken Wall Street pains to tailor yourself beyond that cliché and into another (as many more than one would hope indeed have), but a book is a gravesite if you’re lucky, a mass grave if you work hard enough to sink away from the simply distinguishable – to remain unidentified, the poet’s gift, free of seeds. If we’re lucky we fuck the grass above our interment. Few in our field truly possess the syndromes necessary to remain alert with zero leeway. Those who retain such an endowment may tussle mightily with the utilization thereof, oftentimes itchy about results. I include myself in this subcategory: aware, or anyway disordered by my alertness, but lacking gumption. For over five years I’ve condensed and reedited the same twenty-thousand span of words, subsuming hundreds of thousands of cut others, and this personalized headstone, a novella with four or six companions stratified inside itself, an autodidactic training session portending sentence maturation, if not, probably, story, which will inevitably be my own plush anticlimax (ahem, I hear that freaky-ass synth work welling behind me), soon premiers to universal cricket noise. Not that perfectionism implies perfection. My subject just happens to be a stasis of the perfidious order I’ve begrudgingly survived. Next I look forward to churning out some potboilers while my predaceous McDonald’s job chips away at that predaceous school loan. It’s all my own fault up to a Glock’s height. Point is, I know how effort sneaks you through its barest tracing. We’re in the same first world police state regardless of where you mail your care. The war in this country against creative expression is won continually by those who think so creatively about war. Only applaud that sentiment if you’re awake enough to admit it will never change and there is no use bellyaching, let alone keeping sentient, both at which I’ve failed, the rest pending. Don’t you have the good sense to have been driven mad?

PS – This film deserves its every cult and to be ranked even beyond into the commonly over-valued status of a classic, because it succeeds at the only worthwhile politicking, likely, best so, without intending, which is to demonstrate (artfully, without clearly stating, anything ever, please) that those who are the haves can be trained into the amaranthine hell-panic awareness of their or anyone other’s goddamn existence.