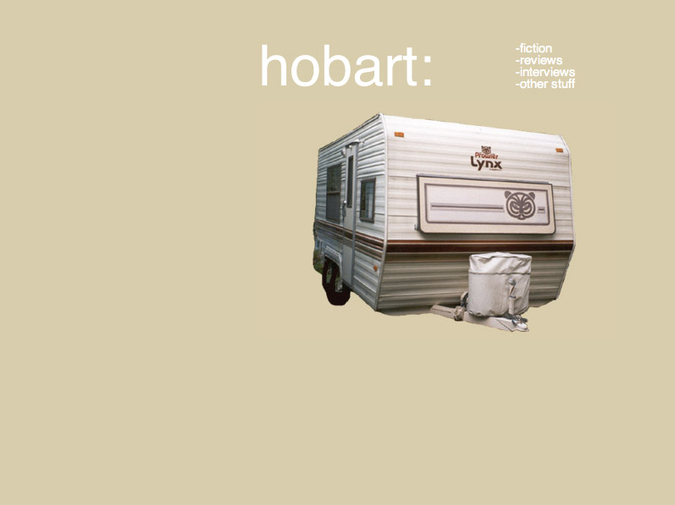 It's been a decade, give or take. I went looking into the Hobart archives and the oldest story is from March 2002. Over ten years! (The stuff before March was pretty much me and a friend or two, writing horrible, early-20-something ramblings about writing in a cafe and attempts at humor, and the like. Those have all since "gone missing.")

The above is the original splash page (at least, according to the Internet Archive). The pre-traced, actual trailer photo!

The original design had a quote along the top of the main page (usually from whatever song I was listening to on repeat; the lyric from the oldest-findable-via-the-Interneat-Archive: "Ever think the world is just one big blubbery walrus ready to sink its ivory tusks into you? Me too." -- Botch). The layout had a bunch of hand-drawn lines, because I'd just discovered The New Yorker (seriously) and I think the likes lists may have even originally been inspired by lists in one hardcore music catalog or another (HydraHead, maybe? <whispering, a little embarassed>Victory Records?).

I think the idea, to some degree, was always toward rolling, fluid content, as that seems to make more sense with the Internet as medium, but that seemed too hard. Like it might take too much energy, too much time, require too much content, and the website was too not built for it. So we went with monthly issues and they stuck.

Enter: a new website. (Super big ups to Ryan Molloy and Mark Dickson for building the site, for taking our vague ideas and making them into actual code, and putting up with my naive-about-website-building, endless "can we do this?" and "what about that?" questions.) And some more, new editors. And, finally, a time- and energy-be-damned mentality.

From here on out, we're excited to be publishing something new every day, Monday – Friday: the same kinds of short fiction, interviews, and occasional ridiculousness we've featured in the past, but also more.

In the coming days and weeks we have more of these "from the vault" pieces where we want to highlight some of our favorite stories from the archives and give them a bit of a second life; a series of short, "craft-based" interviews focused onthings other than fiction, like skateboarding and thrift stores; a few food & drink pieces, including a monthly bourbon review; interviews with "non-readers"; movie reviews; lots of ideas we'll probably come up with later; and even poetry(!!).

For this, our launch, a handful of us editors looked back at some of our favorites from the Hobart archives: