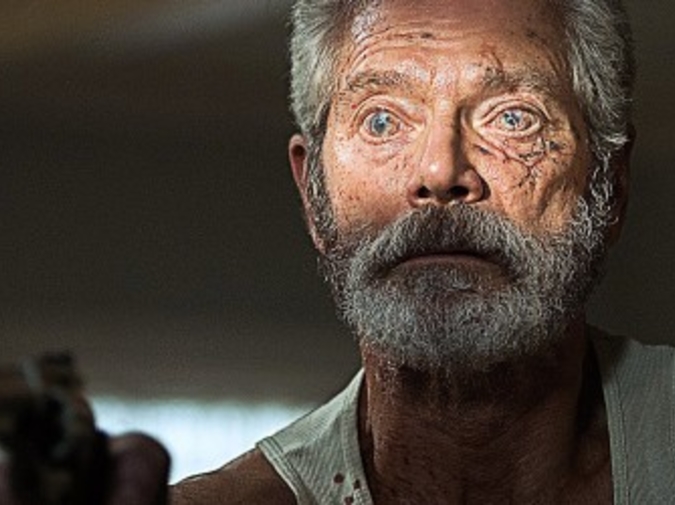 Standing up to pee is a highwire act these days, but the untelevised revolution fought the power and got eradicated with such an efficient scope that the only OCD ninny patrol left limping has gone daft against jokes online, or saucily depicted art in general, and thus unintentionally almost validated the crimes inspiring its struggle. Take heart, because with nary a didactic point behind its genre, with zero lard on its exposition, Don’t Breathe is a multi-tiered artistic jab at the old guard’s massive deathwad and in no way plays it safe or drops the ball on this subject. Foremost, it’s a rousing thriller that doesn’t manufacture jump scares for the sake of upping the sale of spilled popcorn. Rec 2 somehow perfected the pop out, on a technical level. I’ve never seen this practice done better, moment to moment, not even in the other Recs. They benchmarked gotcha, referencing my beloved Demons series, as well, and I’m a discerning terror buff. The genre has devolved into a lot of noise, rattling my already frayed nervous system, because I haven’t been plunged into the moment. I blame the forty minutes of stinger blast trailers before every movie on James Wan. Don’t Breathe is hidden, on the surface, from its arty endeavor because it adheres to the rules in order to depict how messy rules can get. It values the cheap seats by not succumbing to any surplus foreplay with the story. The director appears beforehand to introduce the audience to itself as an atmospheric imperative for experiencing horror cinema and he is absolutely spot on. The reactions in a packed theater are a part of horror (and comedy). Any other time it should be punishable by death to flap your jaws at a public viewing, but exceptions help one endure. The intake converges you into a temporarily insane universal organism high off the unity of its own shared exhibition. Slice in some Romero style “fuck the man” and it’s like everyone gets to hold hands by the orgasm. Art can only let us think we won when we’re sitting down. Let’s send Fede Alvarez a thank you card, especially after he had the thankless task of remaking Evil Dead. My single complaint is that this film made me commit my yearly sentiment of optimism. If something can be for the people without compromise, these are its delicious confines. We should only become the hive to destroy the hive. Seek its luxury to poison the interior design. There is no need to state a message because the execution is so flawless that varying contexts can be felt and are possible to grasp between the lines unsaid. The man is trapped by the cycle of his logic, alternating rage and sorrow with an ingenious delivery, like Vincent Price meets Bane. All of his crimes are justified fatalisms. His seed, his border, his legacy are defended at all costs, irreversibly programmed by blind allegiance, and he shows what training and the right amount of PTSD can do. The people are his thug, his brooding upper class creep, and his woman who will mimic pregnancy by cramping her petite body into claustrophobic chambers (can girls in compact spaces that emphasize their vulnerable and petite bodies be a genre, please?) until she has the opportunity to gag him with his own balding cum. But these provocations merely extend his silent reach, merely hone the mania of his backup. He, too, may think even the flies are a bit aggressive this year. Now that he had to taste his jizz, he knows the true crime of the patriarchy is our artificial flavoring. Is it ok to bite the hand that feeds you if the food is mostly rubber? Let the unicorns thrive and may our bodies hang from their rainbow.