April 1, 2020 Dispatches from the Treehouse

Dispatches from the Treehouse: The Long Season 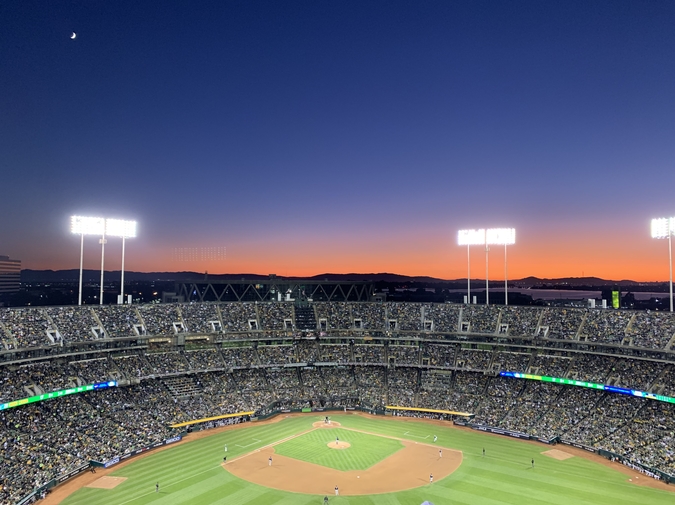 There’s always next year. Until there isn’t.

The television, the radio, the internet, the old couple that walks their ratty dogs by our house on military parade, are talking about the Athletics. It’s unnerving, like I’ve spilled a secret, the talk loud enough to wonder if the secret was even mine. A day away from the game, the front office says the entire Coliseum, including the Mordor grandstand of Mount Davis, is sold out. Fifty thousand plus, the largest crowd to ever see a Wild Card playoff game. An entire season, a limitless summer, comes down to one absurd game. Win or go home. Stay up in the treehouse or get called in for dinner. But what a game.

Tim and I are there hours early. Our midafternoon weekday trains are filled with green and yellow; hell, the parking lots getting on BART were a one-letter alphabet. During the season, there were weeks when we’d not see another noticeable fan until we were on the stadium grounds. The first jerseys we’d see were on the players. Today is a sea of bandwagoners, questions on a loop asking where to get off (the Coliseum is conveniently located at the Coliseum stop), and as much as I hated the crowds throughout the season—our season, the one we must now share—today is different. We are prepared.

We atomize the first basic hot dog we see, we stand for twenty minutes in our beer line knowing it will be an hour in an hour. We run around saying hi and good luck to all the vendors we know by name. I buy a new A’s hat solely because it has the 2019 playoff logo on the side, hard-won over 162 games. An hour and a half before the game, we have everything we need, and we can quarantine ourselves in our normal squatters’ club seats from which today we will surely be evicted. We watch the pageantry unfold. The A’s have taken out seats in the third deck for press, they are shooting off fireworks, and the fans have their rally towels aswirl down both baselines. By the time Kate arrives—she had to wait for two trains to pass because they were full—we’ve moved into our rightful seats halfway up Mount Davis, and the starting lineups are called.

It’s our first time sitting here, and the rake of the seats is so extreme that the feeling is on me before I can pretend I’m all right. It’s a combination of gravity shorting out, my brain shutting down, and my body floating into the upper stratosphere. Reverse-vertigo, maybe, or a keener appreciation of my mortality in my mid-thirties. It’s happened before, in Yosemite for that qualifying birthday last year on Sentinel Dome, where the sheer vastness and high-altitude hangover and gobsmacking beauty of the expanse left me untethered to the rock or reality.

“Take a breath,” Kate says. “We’re right here with you.” The compassionate approach.

Tim reaches over and pulls the brim of my new hat down over my eyes. The literal and pragmatic. “Stare down,” he says. “Look at that, um, streak of nacho cheese. If you float away, you won’t see us win.”

Bob Melvin, with the confidence of a manager of a team that hasn’t lost nine straight winner-take-all games, decides to start Sean Manaea. Manaea, out for almost a year with a bum shoulder and returned only a month ago, instead of Mike Fiers, who had a 21-game undefeated streak this season and a no-hitter in May.

Yandy Diaz leads off for the Rays and hits a home run. No matter. Long game, long season.

Now there’s a prickling in my hands and feet, and my stomach is renting a tasteful uptown one-bedroom in my neck, but there’s no time for a diagnosis other than I’ve hopelessly lost my mind. Slowly—very, very slowly—I lift my eyes from the cheese streak and up to the field. Half of the outfield is hidden by this awful angle on Mount Davis, but from here you can see the entire rest of the stadium. I try to reassemble my sanity by picking out all the seats we’ve sat in over the season. The far right upper corner near the pot smokers who always get kicked out, behind the kiddie playground in right field before we realized that it was creepy, the left field club where we sat shoulder-to-paw with all the other dog owners for Bark at the Park, Golden Road Landing where we fought the asshole techie invasion, Shibe Park Tavern where I exposed a fake employee sent by underworld figures to charge me and only me double for a beer, and all of the totally unremarkable places where we spent an entirely remarkable season with no one else within five rows. All of them now filled.

I’m feeling better—thinking about people other than myself will, I suppose, on occasion do that—so I lean up fully in my seat and gasp, actually gasp, at the sweeping panorama of the Bay Area. Mount Davis is so tall that you can see over the stadium itself, and somehow this day has been ordered up special: pollution blown out to sea, no fog, a postcard of the water and the peninsula and San Francisco and the bridges and dock cranes and Marin and the sun now just starting to set over an impossibility of ocean in the most infuriating and beautiful place I’ve ever lived.

I should have known. It isn’t Diaz’s second homer or Avisail Garcia plating two runs in the second. Rays’ hits smash into an obscured outfield; we only know how bad they are by the rippling despondency below us. The place itself is looking out for us. The hellish stadium, the city, the bay—not our beloved team—makes us look up and ahead at the actual horizon. It isn’t what we can’t see but what we can.

And by the third inning, it’s really, truly, shittily finished. “They gave us about twenty minutes of thinking we were in it,” Tim says. “Twenty minutes.”

I scrunch down further into my seat, rally towel limp across my knees or draped on my head in surrender. I mumble, snap at Kate and Tim, and generally become the most asshole version of myself. I’ll be a better person next March.

“Remember, it’s just a game,” Kate says, meaning it without patronizing me even a little.

“Oh is it?” Nine-year-old me responds.

Knowing a hopeless case when she sees one, she turns back to Tim. “Why can’t he float off the earth now?”

I try to be heartened by the number of fans staying until the bitter end, but then I realize that the largest crowd to ever see a Wild Card game, 54,005, is all trying to get on BART at once. We are all stuck, and a sour collective mood turns rotten.

“Well, now you know what it’s like to be a real baseball fan,” Tim says, with the wisdom of a Red Sox fan who saw the winning game of the World Series last year. I say, “They didn’t even fucking try,” knowing that they definitely did. Even Manaea. Kate and Tim rightfully tell me to sit by myself. I go to the opposite side of the kiddie diamond where children run and run and run and run the bases, unbothered by the crowd and unaware the season is over. I think there might be a lesson here but mumble Fuck this and the parents next to me retire their ketchup-caked third baseman.

The ten-minute walk to the BART platform takes over an hour. Even the ubiquitous/lawless hot dog vendors and beer slingers have gone home. Body to body, I get grabbed and think I’m being mugged, but it’s Kate with her arms around me in a last-ditch effort I don’t deserve:

Baseball is a game of expectations and scores. Myth and metrics. In our paralysis, the country is now too. We hope our crisis will last weeks and not months; daily we adjust our expectations based on the numbers of hospital beds and ventilators. We expect optimism and chance—a good bounce here, bad one there— to play a role even if they don’t. We are told we can make a difference but we are told the numbers do not lie. And we expect to make it. We expect to play baseball this season. The expectations for the A’s are high thanks to the Astros’ cheating scandal, what we once called a fallout until we started looking at an actual fallout. The number of games will shrink as the other numbers we watch rise. It is only March and everyone has expectations and only a few will be right and the only promise is that it will be a long season. Long season, curve, distance, safe; words all infected and quarantined until further notice. We are good fans. We believe. We look at the numbers. We will believe until the numbers tell us we cannot.

And in all of it I cannot stop thinking about that last game because I have nothing with which to replace it. I think about what we endured—lining up for the bathroom and food, standing up for every clattering family that needed to move down the row, rolling our eyes at the bandwagon fans and screaming drunks who didn’t know any players’ names—which seem like the little league rules of society now that our national pastime is nothing but actual endurance. I think about the new season, when it comes, how I will surely be changed—more patient, more appreciative; cleaner, thriftier, chattier with strangers, reminded that the worst day at the ballpark is, well, you know—and how long that will last, if it will last, if the season comes.

For Opening Day, Tim, Russ and I watch a game together on Zoom from last year, the split/delayed game moved from Detroit to Oakland in the bottom of the seventh inning, picked up on the same 2-2 pitch of the at-bat months later. It was a moment frozen, beyond time, when everything could be stopped and started again. An empty score baseball could fix. Best thing I’d ever seen.