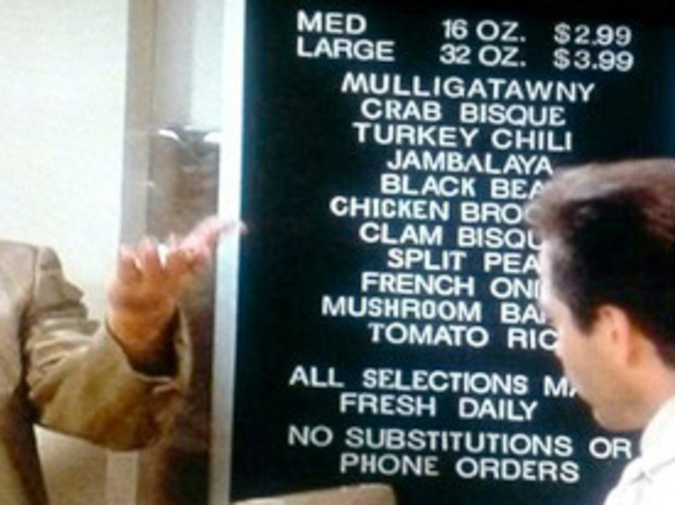 Just look at those soup prices when Clinton was in office.

—MULLIGATAWNY (The Pain and the Yearning)— 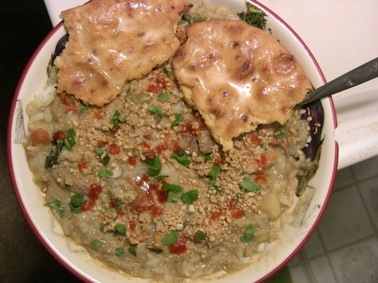 You could put that rooster sauce on a shoe and it would taste pretty good to me.

Of course, there’s no real easy way out with mulligatawny, and I was unlikely to find it in a regional cookbook compiled by master gardeners. It was the first on the Soup Nazi’s menu, and it was first on my list as well.

As I wandered the aisles of Hiller’s, my grocery store of choice, I began to feel like I had mistakenly grabbed an early draft of Harry Mathews’s famous story/recipe hybrid, “Country Cooking from Central France: Roast Bone Rolled Stuffed Shoulder of Lamb (Farce Double).” The verboseness of the title prepares you for the absurdity of what follows, a 5,500-word description of how to prepare a dish that seems to require that you have several months at your disposal plus a provincial French town untouched by time. It includes disjointed chronology (“At some previous moment, you will have made the stuffing for the quenelles”), unnecessary details (“[The fish] is lured to the surface with a skein of tiny beads that resemble the larvae on which it preys, then bludgeoned with an underwater boomerang”), and little quips from the writer of the recipe, commentary that both satirizes a golden age mentality but also sometimes rings true (“Do not under any circumstances use a baggie or Saran Wrap to enfold the quenelles. Of course it’s easier. So are TV dinners. For once, demand the utmost of yourself: the satisfaction will astound you, and There is no other way.”) My intro classes are sometimes surprised when I inform them that the story is funny.

Emeril’s version of mulligatawny has twenty-four ingredients, including zucchini, and toasted, finely ground cashews, and – a typo? – Granny Smith apples. When the time came to locate garam masala and an eleven-dollar jar of ghee, the Hiller’s employee I solicited help from had one leg that was longer than the other, and she had no interest in custom orthotics. In despair I said to hell with apple cider vinegar – what’s a tablespoon of that gonna do anyway? ­– and left with only twenty-three of the ingredients.

I don’t know if I need sharper knives or one of those chain mail gloves they wear at Chipotle, but every time I’ve made mulligatawny it’s taken me three hours.

And, every time, my satisfaction has astounded me.

I pair all my soups with some kind of bread (and a fake movie from Seinfeld). In this case, naan. 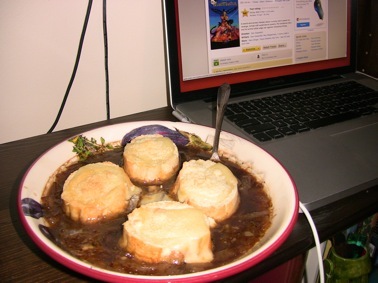 I would say there was a good six or seven years in my twenties that I didn’t cry once. But lately I’ve found myself losing it more frequently, and I’m beginning to wonder if it’s due to my increase in onion cutting. Like when Jerry’s girlfriend teaches him to get angry in Season 9 Episode 3, “The Serenity Now,” French Onion Soup has opened a Pandora’s Box of emotions in me. I always had trouble with Matthew Broderick on the beach at the end of Glory, with the coroner in Grizzly Man, with the guy jumping off the building in Wings of Desire – but now I’m breaking down over Matthew Perry’s recovery story or Green Day’s The Time of Your Life. Do you remember when they played this song in Season 9 Episode 21/22, “The Chronicle”? Do you remember how weird that was? It was weird because here was a show featuring characters we loved specifically because they thumbed their noses at sentimentality, lived lives that defied nostalgia – and now their soundtrack is the last dance at a high school prom?

For French Onion Soup, or “Onion Soup Gratine,” I turn to an adorable cookbook compiled by the Winnebago County Master Gardener Association, full of recipes with names like “Exotic Meatballs in Crockpot,” “Chili Even my Husband Likes,” and “Whatever.” My reason is that this entry is by my dear mother, and this was one of my favorite meals she made when I was a kid. Of course, back then I famously hated onions, and so the version she made me was inevitably beef broth floated with a sodden barge of French bread covered in Swiss cheese. The only thing that still grosses me out about this soup is how the butter congeals on the surface after it’s been in the fridge for a day. You have to crack it like a thin layer of ice.

One day I dialed my mom to brag about my most recent culinary masterpiece.

There was a hint of mystification in her reply that immediately started messing with my brain. “Where did you get the recipes?” she asked.

I mean, the answer seemed obvious to me. “I just Googled them.” It was like asking where on earth you were able to locate shoelaces.

My mom grew up in the mountains of north Georgia. Many of the meals she made me as a kid were passed down generationally, an edible oral tradition. I’d tried to take on something difficult, but somehow I’d still taken the easy way out. 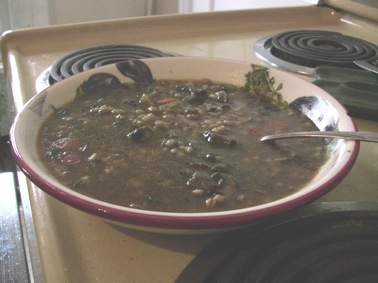 Either despite or because of the fact that I grew up in a house that celebrated flatulence, the following truth is really difficult for me to put down on paper: this soup makes you fart.

There are other reasons I don’t really like this soup very much, but a strange OCD compels me to complete the Soup Nazi menu in its entirety before I can begin again. I dislike mushroom barley soup for the same reasons that I dislike Ann Arbor, Michigan. The recipe I use is actually that of Zingermann’s, an overpriced, bland-ass deli in Ann Arbor that specializes in making you feel superior to everyone else. The soup pretends to be straightforward, unadorned, and affordable, but try finding a pound of porcini mushrooms at Meijer. Like most food made by rich hippies, it’s vaguely ethnic and ultimately flavorless.

What people sometimes forget about Seinfeld is that, despite the show’s continued popularity, none of its main characters are cool. Jerry doesn’t want to eat at Isabella’s because it’s too trendy, George can’t stand hip musicians with their complicated shoes, and just try talking about your fiancé too much around Elaine. “Did he use a lot of slang?” Kramer wants to know. “Did he use the word ‘man’?”

We usually blame misanthropy on the misanthropes (it’s easier that way), but how much of their venom can we blame on New York City’s affectation and swagger?

I’m not fairing much better in Ypsilanti, Ann Arbor’s weird, demoralized twin city. I’d like to say that I’m just bitter towards rich people – but my parents have money. I’d like to say it’s because of how the U of M throws its weight around – but I’d affix myself to that place if it’d let me. I’d like to say it’s because I’ve been painting their houses for years and I’m tired of being treated like a grunt – but most of our clients are pretty nice. In the end, it is this: Ann Arbor is full of smugly self-satisfied people, and they deserve a soup that likewise doesn’t know how uninteresting it really is. 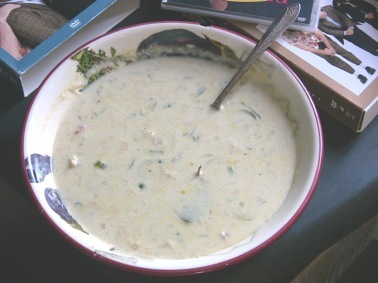 With rim of crud from microwaving.

There are three bisque references in Seinfeld. Two bisques appear on the Soup Nazi’s menu, clam and crab. But also, devotees will remember in Season 8 Episode 19 when Elaine makes up a story about going out with a guy, eating lobster bisque and yada yada yada she never heard from him again. “But you yada yada’d the best part,” Jerry objects. “I mentioned the bisque,” Elaine counters.

At first, I thought that Elaine was exaggerating. I thought: this kind of tastes like milk soup and that’s kind of weird and sex is better than this. My dubious feelings for bisques were exacerbated since my aforementioned OCD required that I make at least two bisques every cycle through the menu. Then one round I beat back my OCD by recklessly throwing together a crab and clam bisque, and my discovery was that the more stuff I added to the bisque, the less it tasted like milk soup. Sex suddenly had competition. It was one soup’s strange erotic journey from blah to delish.

One time I decided to up my level of fanciness by buying shrimp with all their parts intact. I’m not sure why it costs more per pound to do the work yourself, and I did not enjoy how it forced me to acknowledge that these things were real creatures – hideous Lovecraftian creatures that I would kill with fire were I to encounter one in the wild – rather than little meat candies with detachable handles. There was some satisfaction in slicing them up the middle and pulling out that purple vein, though. I’m not sure if it was the shrimps’ freshness or that hour of peeling I put into it, but that was the tastiest pot of soup I’ve ever made. 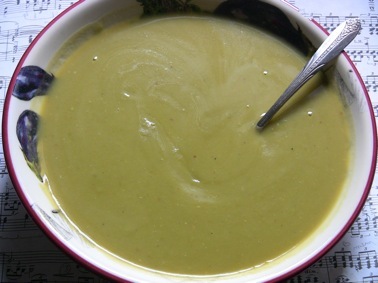 Not much to see hear, folks…

“What’s the DEAL with soup? It’s not a drink; it’s not solid food. We really need a new verb for how we consume soup. ‘I’m gonna go eat some soup.’ Maybe for a stew that works, but for tomato soup? For split pea? For Cup-a-Soup? ‘I’m gonna go drink some soup?’ Even worse.

One thing I don’t get is people say they eat soup on cold days to warm up. People, your body’s ninety-eight degrees … and quite humid. You wanna get warm, pour it on your head!

You know how soup was invented? Wife wasn’t watching, some guy was using the sink like a plate, dropped the best bite of cold pizza in the dirty dishwater. There was a spoon sitting right there. Bam: minestrone.”

I’m back at Hiller’s, astonished that people can’t tell when they’re in somebody’s way. Or don’t care. I’m wondering for the twentieth time if broth and stock are the same thing and thinking I should Google it when I get home but know that I won’t. My printed recipe for split pea calls for two quarts of chicken broth, and as my brain pretends to try to remember the cups-to-quarts conversion, I realize that this frustration of not knowing a simple thing is increasingly a novelty and will be gone once I surrender my brain to the surrogacy of a smartphone. I search the broths until I find one that tells me four cups are one quart. I tell myself to write this down on the recipe when I get home. But know that I won’t.

The sizzle of the dry peas, surprisingly peppery, into the pan of oil and onion. Will the bay leaf crack in half? Simmer them tender in the broth for forty-five minutes. Somehow I actually own a hand-held immersion blender, though I worry about it spirographing scratches into the bottom of my fennel LeCreuset stockpot.

Joe Sacksteder is having a very good Monday. In addition to this essay on Hobart, Punctum Records announced today that they will be releasing his album of Werner Herzog sound poems (as The Young Vish) later this year. He would be delighted if you checked out some of the tracks on Sleeping Fish, textsound, and The Collagist.