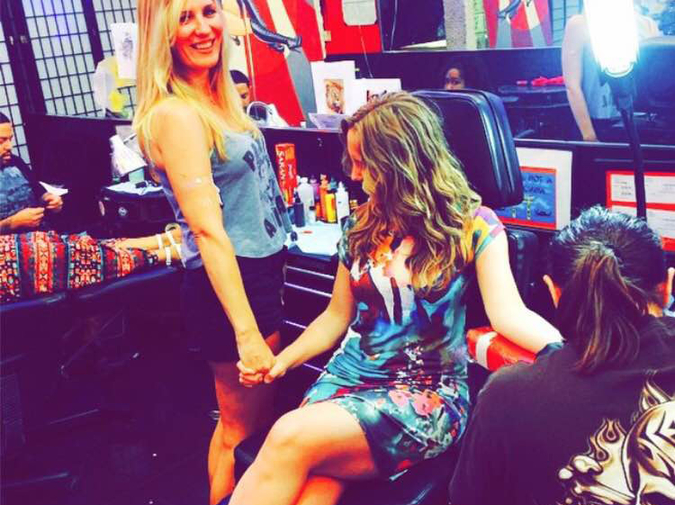 Do you know that feeling: you’re sitting in a bar, or watching Netflix, or walking down a dirt road looking at flowers, and suddenly you feel a dull ache, an intense parchedness of sorts, and as soon as you notice it, it’s gone?

Why is there no word for this feeling, which feels like hunger and thirst and something else all raging at the same time?

The short version for me is: I’m craving seltzer; Perrier with a slice of lemon, a can of La Croix.

The long version is: that’s what my entire twenties felt like; Wanting. Yearning. Craving.

“You do a lot of things to, like, actively care for yourself.” This is my friend Fiona a couple months ago. I thought I was mentoring her until I see she’s in a much better place than I was at twenty-three and think maybe she should mentor me. She doesn’t know I spent the first eight years of my twenties making choices to tear myself down, to hurt my life. I am building it back up now. I am single. I have to pay people to touch me.

“My 29th year was when things started to click for me, personally and professionally. I finally found the courage to quit a job I’d long hated and leave a city I liked even less. I was still working really hard, but felt like I was finally gaining some traction.” —Ann Friedman.

I definitely gained traction in my twenty-ninth year. At twenty-nine, my skin cleared up, I sold a book. But the biggest accomplishment for me was that I stopped working retail and made my money solely from writing and teaching writing. For me, someone who never went to college, this has been huge. Success is relative. I still serve hors d’oeuvres at weddings when I’m asked. But seven days a week, I work from home. I have more money in the bank than I’ve ever had. I can go get a repair on my car (I have a car!) and let the guy swipe my card. There’s a power to that. There’s also a power to being able to buy rosewater from the health food store to splash on your face. That’s the sort of thing I used to see women in their thirties do. And hate them for.

“You won’t miss your twenties?” Fiona again. Fiona likes to ask me loaded and layered questions when I’m loaded and inarticulate. She’s on my futon and I’m in a chair across from her. Turning thirty is still a novelty for her, not a real thing that will happen. I know this, because I felt that way too.

I fall into cliches to answer her question, albeit, the cliches feel true.

“I’m ready to move on. I’m excited,” I say, like turning thirty is getting on a boat to Europe or something.

But two times now, I’ve woken up in a panic: Thirty! Old! Where did my life go?

Something has been lost.

More has been gained.

Eating dinner with my dad before we see Elvis Perkins play a show, I tell him about the flight I booked to France. He asks me why. “For my birthday,” I said. “I’m going to be thirty.”

His eyes widen and he looks up from his food.

“You didn’t know I was turning thirty this year?”

“Oh I can’t wait,” she says. “You always think you’re the one who will keep having adventures but when you get older, you find you actually do stop, so I love reading about them.” I pause halfway down the stairs, look up at her. I’m wearing a green trench coat, holding a cold bodega coffee I brought with me. She’s holding the bowl of mixed nuts we’ve been eating.

“You stop having adventures?”

“Let me rephrase,” she answers. “Your adventures change.”

I had no idea what she meant; what that would look like.

It wouldn’t happen to me.

“We always think we’re the one it won’t happen to,” Melissa says again.

“It’s just you miss the reckless girl who lived here. Retarded funny stubborn blind unforgiving little wench, beholden to no one, blindly enacting her will on everything, everyone. It was your youth! Now you’re older and wiser and better in about a thousand ways. A halfway decent sense of self on a good day, for starters. Now you know some things about where to put your energy, about what it means to build up instead of tear down, what it’s like to nurture good things so they grow. You wouldn’t trade anything for anything. All of this is true. And yet let us not skirt the issue that something was lost. Something has been lost.” —Elisa Albert

Twenty-nine was the first year I could afford good skin care products (Evan Healy, Naturopathica) and good shoes. I bought Fryes, No. 6’s, Worishofers, Merrel’s, New Balances. I hadn’t heard the term self-care until I moved to Portland at twenty-six. At twenty-seven, I started to wonder about it; at twenty-eight, realized I had to do it to stay alive and be my best self, and at twenty-nine, finally had some money to do it. That’s what they don’t tell you about self-care, that it’s expensive as hell. Now, my roommate and I are often running off to massages, acupuncture, saunas, therapy, dentist appointments, yoga.

Sometimes I just stand in my pantry and look at everything, the light bulbs and olive oil, nuts and lentils. Disbelieving.

What should we do with our lives! we yell, drunk, in our twenties.

Are these really our lives? we ask each other, drunk, quietly, over wine in our thirties.

Glasslands Gallery in Williamsburg opened the year I was twenty, the year I moved to Williamsburg, 2006. I lived on North 6th street (between Driggs and Roebling) and spent my weekends at Glasslands; I immediately felt at home. I could paint on the walls. My best friend and I could get so drunk we wrestled on the floor and threw shit at each other. Everything unacceptable at other bars was what you did here. And the owner, Brooxe Baxter, had a blog. A blog. I didn’t know what blogs were but I knew she sometimes wrote personal shit and she was OLD! Twenty-six or something! And I saw Deer Tick and Miles Benjamin Anthony Robinson and Yeah Yeah Yeahs when they played an impromptu and free show there. I spent my birthdays and Valentine’s Days and New Year’s Eves in that space. Right time, right place.

The other night, after teaching writing in Flat Iron, some students and I went to the wine bar next door. After 2.5 glasses of wine, I took my train home, buzzed and nostalgic.

In my stupor, I got tunnel vision and began obsessing over Glasslands, and I ordered a Glasslands t-shirt. When I used to meet older people, I noticed their venue t-shirts and I noticed when they said they used to live in a different city. This was what made you an adult, I thought: living in different cities and having t-shirts to prove it, t-shirts to sleep in while feeling melancholy.

Whenever I see a person with a weathered band or city or bar t-shirt, the image of them is crumbled by wondering: where did she get it? Did she stand in line to pay for that t-shirt? How old is she/her shirt? Was it really worth buying?

I didn’t know until the other night that Glasslands is now VICE magazine’s headquarters.

I don’t relate to people who hated high school or their twenties.  What’s not to love? I was always hyper-aware those years were temporary, that it was a time to fuck up while I still could.

“Sure, my boobs were a bit perkier at 25, but I didn’t have the right bra.”
—Karly Slutever

“I used to do cocaine and go running, now I just go running.”
—Elizabeth Wurtzel

Last winter I went to a lingerie store, tried on a few bras, bought two.

“You know these are different sizes, right?” the saleswoman asked me.

Later always comes. And you turn thirty even though you thought you could ward it off with a tattoo of the word ‘twenty-nine’ on your body.

I fell down a flight of stairs at a wedding reception, car keys in hand, when I was twenty-five. I’d taken a Vicodin with every glass of champagne. My friend and I were up in her room, changing our outfits and I put on her wooden wedges, then fell from the top of the stairs. Legs over head down each step. In the morning—Father’s Day—I remember thinking, It is okay to do that at twenty-five. But you cannot do that at thirty. You got away with it this time. Never again.

In my twenties I thought it was really charming to tell people I enjoyed eating whatever I wanted, that I would count calories in my thirties.

At Fiona’s in Bushwick, I sleep on her couch after she feeds us pizza and salad. In the morning when she’s at work I leave the books I brought for her on her coffee table. The Defining Decade: Why Your Twenties Matter and How To Make The Most Of Them NOW. Twenty-something Essays by Twenty-something Writers.

“For me, many of the privileges of getting older have been bound up with getting cash. As an artist, I've done better than most.  Each year I've managed to hack together more opportunities, and paint with more mastery, until one day, I realized I was no longer flailing just to stay afloat. Being 30 is sweet. Saying I was 30 I pointlessly despised.” —Molly Crabapple

Something has been lost, but more has been gained. I can only hope. But I can afford venue t-shirts now, I hold my own hair back when I vomit, and I don’t vomit.

But here’s what I want to know, what really plagues me at night when I can’t sleep, about the last ten years: Where the fuck did all my jean jackets go?

Chloe Caldwell is the author of WOMEN (SF/LD 2014). She lives in Hudson. Her hobbies include watching television in hotel rooms with a bottle of Maker's Mark and Elizabeth Ellen. Pre-order her next book I'LL TELL YOU IN PERSON here.