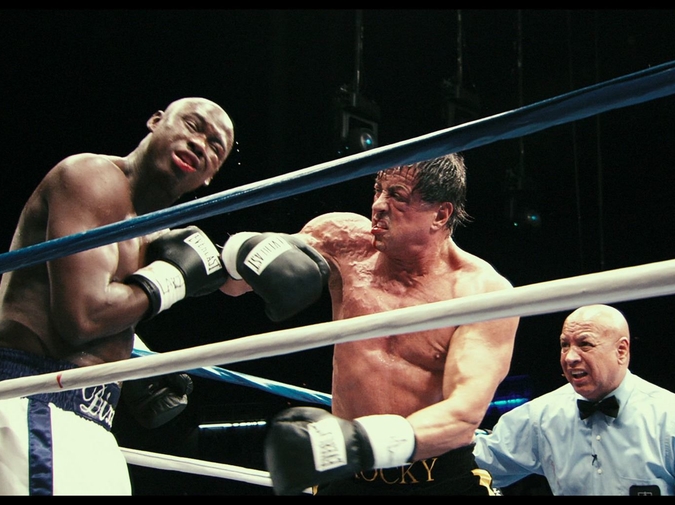 “Let me tell you something you already know. The world ain’t all sunshine and rainbows. It’s a very mean and nasty place, and I don’t care how tough you are, it will beat you to your knees and keep you there permanently if you let it. You, me, or nobody is gonna hit as hard as life. But it ain’t about how hard you hit, it’s how hard you can get hit and keep moving forward. How much you can take and keep moving forward. That’s how winning is done.” —Rocky Balboa, Rocky Balboa

As a quiet, unathletic child, coming off an obsession with American History and the U.S. Presidents, I somehow became enamored with the Rocky movies. My few pop culture loves were obvious —I adored the Indiana Jones films, and I wasn’t far removed from Teenage Mutant Ninja Turtles. Baseball and basketball remain the only sports I follow with any regularity, and, around the age of nine or ten, the stories of the sweet boxer from Philadelphia became constant fixtures in my life as I wore down a set of battered VHS tapes. Even after watching them dozens of times apiece, I only became glancingly fascinated by actual, real boxing, but to this day, I still don’t know how the judges keep score, or any names beyond historic relics —Ali, Tyson, Marciano, Johnson.

Now, as an adult still finding my way in the world, I know why the movies appealed to me. I loved the cartoonish spectacle, the sonic-boom punches, the grand training montages, the idea that failure only happens on the inside, that you can lose by sheer numbers but win by sheer will and believing in yourself, that we all have the ability to look daunting circumstances in the eye and say “one more round.” Undoubtedly, a good majority of Rocky devotees would shake their fingers and say “you’re proving the point. The movies aren’t about boxing, they’re about life itself.”

Yes, this is true, especially for a God-fearing nine year-old who fervently believed in the American Dream: everyone gets a shot, everyone’s on a level playing field, and it’s what you do with that shot that matters. Back then, I didn’t see the films as a very white American fantasy, and how, a simple line from Creed II (“you know she’s going to be black, right?”) upends the entire original five, which, aside from Apollo Creed’s desire in the first film to be a black man giving an Italian a shot, attempts to be colorblind in its dialogue, but presents uncomfortable racial dynamics. Namely, Rocky’s opponents are too black (Clubber Lang), too Soviet (Ivan Drago), and too white trash (Tommy Gunn) to be successful. Rocky’s white, friendly, and determined. If Clubber Lang smiled more and wasn’t comically, cartoonishly violent, his story would mirror Rocky’s own perfectly: a fighter, rising from nothing, becomes the champion through hard work. Apollo Creed turns from foe to friend once he sees Rocky’s spirit. If Clubber Lang just chilled out, he would’ve been in Rocky’s corner, too.

This is what this essay was supposed to be about.

This essay was supposed to be about rewatching the films as an adult, and examining how the three newest entries in the film series —Rocky Balboa, Creed, and Creed II —might add new contemporary wrinkles to a decidedly old-fashioned quintet firmly planted in the 1970s, 1980s, and 1990s. An essay about my own white privilege, when I can turn my brain off, not think about racial dynamics, and root for Rocky to get on his feet at the last second in Rocky II.

This essay wasn’t supposed to be about how my rewatching the films coincided with a cold grip of depression, anxiety, the disintegration of a long-term relationship, and the scariest wave of creative self-doubt, no mere Hmm, I don’t have any good ideas at the moment, but more Why even bother? What do I have to say that anyone cares about?

“It’s gotta be like, an angel on your shoulder, see? If you ever get hurt, and you feel like you’re going down, this little angel is gonna whisper in your ear. It’s gonna say get up, you son of a bitch, ‘cause Mickey loves ya.”—Mickey Goldmill, Rocky V

Rocky never suffered from depression. Anxiety, yes, but nothing a quick motivational speech from Mickey, Adrian, or Apollo couldn’t solve. If those didn’t work? A reflective drive on a motorcycle or in a sports car, and boom, back on the right track. A pat on the back, the love of his wife, the death of his best friend: these shook him out of complacency. When this essay formed in my head, I had my own training montage in mind: a furrowed brow, notebook in hand, jotted notes, picking up on scenes or lines of dialogue I’d missed as a child. The writer’s eye of the tiger. Instead, I curled up on the couch in a ball, and rewatched the films, told myself I was doing research, addled by too much coffee or numbed by too much whiskey, in an almost catatonic state. I took no notes, discovered nothing I didn’t already know, and was content to forget my problems in the comfort of nostalgia.

Even though I was seeing a therapist for the first time in my life, working on my self-esteem, my communication problems, my fear of a relationship running its course, at times, I reverted back to bullshit masculinity. Throughout my scary, life-altering changes, part of me thought I needed to just toughen up, that I needed a Mickey in my corner to slap my face and tell me women weaken legs, that all I needed to do was shake off my insecurities and plow through, that glory would await on the other side, even if I didn’t win my fights. But mental health is a lifelong struggle, even in the best of times. I’ll have many beautiful highs, and I’ll have to manage the forthcoming lows, but most importantly, I can’t pull a Rocky. I can’t pull myself up over the course of ninety minutes. Suck it up is the worst thing we can tell ourselves in the darkest moments.

In the original Rocky, Adrian has a beautiful moment where she stands up to her brother’s abuses and tells him she’s not a loser. This should’ve been an empowering scene to fuel Adrian through the rest of the films, but, as age and knowledge show, she’s not a pillar of 1970s feminism; she only “discovers” herself when Rocky “shows” her how beautiful she is, in a very uncomfortable scene where he holds his apartment door closed and, as sweet and caring as he’s supposed to be, doesn’t take no for an answer and let Adrian leave his place. Throughout the series, she’s (according to awkward YouTube comments with no punctuation) “the ultimate wife,” living to stand by her man and give him encouraging words when he doubts himself. In my painful twenties, with no skills, nothing to offer a partner, I wanted an Adrian in my life, someone to hold me up and give me pep talks and chaste kisses. The older I was, the more I learned how misogynistic these wants were. I threw myself into being the perfect partner, eager to clean up messes both literal and figurative, to keep the boat steady, to provide in ways I couldn’t financially. When my last relationship began to crack, I retreated into myself, physically unable to express my fears, and comforted myself with “this is what happens; relationships become routine and stagnant.” It took several arguments, some initiated by me, some initiated by her, until we got to the point where we could both freely admit things were broken beyond repair. I had to admit “I can’t do this anymore,” to cause immediate pain to begin the process of mutual growth and healing. Another cinematic example of where I thought I’d failed. Rocky and Adrian could never break up. Rocky provided, Adrian supported, and their fights were merely ways to make him realize what’s important, even if it meant putting himself in harm’s way. Even offscreen, they likely never shared deep, complex conversations. Adrian never thought about having sex with other people. Rocky never looked at her and asked “are you truly happy?” They merely argued, forgave each other quickly, and knew they were both better for each other with every step Rocky took to find himself. A monologue, a kiss on the lips, and all was right in their world.

There’s a bar across the street from my apartment. On Friday nights, a house band plays cover songs that echo throughout the complex. One night, in the midst of an anxiety attack, I sat outside, chain-smoking, futilely looking at therapy memes on my phone, desperately going through the motivational tips my therapist gave me, reminders of my worth, the validity of my desires, the easier-said-than-done understanding that people change, relationships fail, and it’s not an indication of one’s goodness or lack thereof. In this moment, the cover band started “Eye of the Tiger,” the lead singer putting his all into the cheesy 80s lyrics, and it was almost impossible to not get pumped up. I wanted to grab my coat, run across the street, and cheer along with the patrons. Instead, I reflected on the lyrics.

This is where Rocky is wrong. Sometimes the dreams of the past change. Sometimes you have to stop fighting to keep alive what needs to die and be reborn as something else.

I sometimes hold my breath when Rocky falls, because in my most vulnerable moments, I’m still thinking about my nine year-old self who has no idea where his life will take him. When Rocky’s on the canvas, I whisper get up, get up. Even though I know he will, I’m not always sure I’ll be able to get up quickly, but I have to remind myself to try.

James Yates is a contributing editor to Longform.org, and received his MFA from Roosevelt University in Chicago in 2015. His work is forthcoming in Pidgeonholes and has appeared in Hobart, Vol. 1 Brooklyn, Necessary Fiction, Split Lip Magazine, and other publications. He lives and writes in Lafayette, Louisiana.