Wow and Flutter #1: Peace and Love from Lee 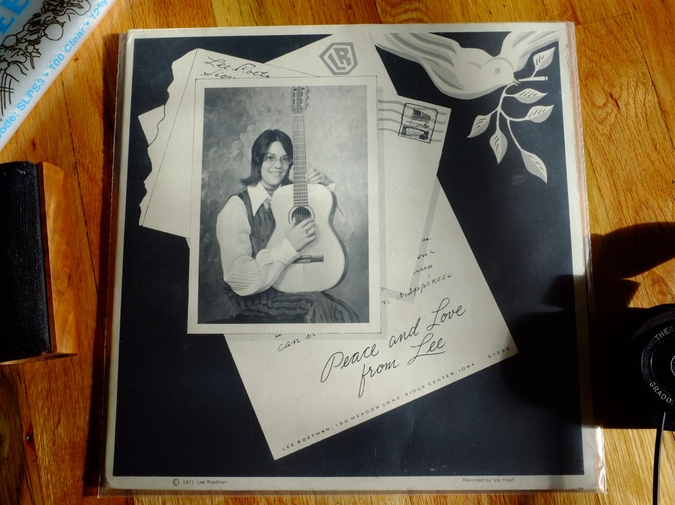 Walter Benjamin begins his essay “Unpacking My Library” like this:

I can relate. This last summer, I moved all of my possessions from an apartment in Bellingham, Washington, to a nearby self-storage locker. About a month later, I got married in Milwaukee, Wisconsin, and about a month after that, I moved all of my things from the storage locker to my new apartment in Portland, Oregon. In addition to the four 20-gallon storage bins filled with LPs, there were three boxes of 45s, 100 or so cassette tapes, a few stereo components, four speakers, and the huge bookcase that I built out of unfinished wood to house it all. Had it not been for all of my obsolete media and the accompanying gear, my wife and I probably would have just gotten rid of everything and started from scratch. Instead we had to rent a box truck.

I have two minds about my records. On the one hand, I feel like they weigh me down. They are heavy and unwieldy, and some of them, honestly, are just placeholders until I find better copies. My obsession with them makes me feel materialistic, hoarderish. On the other hand, they exist as a sort of personal history of collecting, and the collection forms a monument unto itself. In this way, the acts of unpacking, cleaning, sheathing, shelving, become a sort of exercise of remembering.

I imagine Benjamin felt a similar ambivalence toward his collection of over 2,000 books. He was a Marxist, after all, and knew the books would have served a better utility in a public library, but he engaged in the dialectic exercise with himself nonetheless, ultimately letting his bourgeois collector’s impulse win the debate. When he wrote “Unpacking My Library,” he had, in recent years, separated from his wife, his beloved books had long been in storage, and he was in the process of moving into a small—and I imagine lonely—apartment. And so, the unpacking is twofold: first, the literal unpacking, the prying open of crates, the organizing and shelving; second, the unpacking of the individual object, examining “the whole background of an item” that “adds up to a magic encyclopedia” that is the book’s fate.

And so here I am in Portland, nearly a century after Benjamin wrote “Unpacking My Library,” alone in my living room, holding a strange album called Peace and Love from Lee. It’s a record that I found at a Salvation Army years ago. It’s the sort of weird self-released artifact that I can never pass up. It’s pure outsider art. The picture sleeve is only printed on one side. The cover image is composed of an illustration of a just-opened letter and a Sears Portrait Studio–like photo of the artist, bespectacled and holding a guitar. The letter’s sign off, Peace and Love from Lee, serves as the album's title. The copyright is “1971 Lee Roetman.” The copyright symbol itself appears to be a typed C with a hand-drawn circle around it. Recording credits go to someone named Ver Hoef.

11 songs—five originals, six covers—comprise the album, each one a simple arrangement of vocals and acoustic guitar. Alongside folk revival standards like “This Little Light,” “Blowin’ in the Wind,” and “Last Night I Dreamed the Strangest Dream,” Roetman’s originals are similarly optimistic, rooted in the simple maxim that all people are equal, and all people should love and be free. It is the ethos of the 1960s without the rebellion. There is nothing psychedelic about it. The most subversive moment comes in the form of a song about a mixed-race couple who wish the outside world could see them for what they are: two people in love.

The album isn’t really in my wheelhouse in terms of the type records I usually get excited about, but I keep coming back to Peace and Love from Lee nonetheless. Indeed, it has its moments of outsider transcendence. Sitting alone on the hardwood floor, surrounded by plastic tubs filled with LPs, I google Lee Roetman to find out more. I’m taken to a memorial page hosted by a funeral home. The picture on my laptop screen, though presumably taken 40 years after the picture on the cover of Peace and Love was taken, is of the same woman. I read her obituary. She was born in 1947 in Iowa. She earned a degree in occupational therapy in Minneapolis, where “[s]he also received a degree in piano tuning and serviced many pianos in the area.” Lee moved back to Iowa in the 1970s, where she worked as an occupational therapist and attended the American Reformed Church. In 2008 she suffered a stroke. She died April 20, 2014.

I google around a little more. I dig too deep. I find her friends’ facebook pages and scroll through their timelines, backwards in time to Lee’s death. Backwards further—she is admitted to hospice. Back even further and the feeling of snooping becomes overwhelming and I stop myself. I’m looking in a stranger’s windows. I’m walking uninvited through a stranger’s home.

I started a new job here in Portland. I didn’t want to work at a desk anymore, so I reverted back to working as a barista, the occupation I had through college. Everything changes. Everything is the same. Working at a coffee shop again dredges up old memories that I haven’t considered in a very long time. It dawned on me recently that nearly every experience I have in the present links backwards to a memory of something I’ve experienced before. This seems to be an intrinsic quality of the human experience in general—we live a sort of split existence, living a present informed by the past. Each fleeting moment is colored by moments that came before. Thinking about this too long is overwhelming for me, and when I really give in to that train of thought, I find myself short of breath. We are all hopelessly alone in our experience of the world, and, moreover, hopelessly fated to have it all erased in the end. I realize this is a bit trite, but still.

The last song on Peace and Love from Lee is the obscurely titled “Life is a Changing Composition Flow.” It sums up the album’s ethos perfectly: life is fleeting and constantly changing and therefore freedom should be valued above all else. It’s amazing how the songs on this album aim to tackle the big existential motifs through such simple folk songs. And the thing is, on their own they would fail at their task. Without any context, they play as a sort of Kumbaya-like reduction of the hippie movement. But I have the context, or fragments of it at least. And so I play the record and Lee sings “Every man must die some day,” and, well, it gets to me.

Unlike the other songs on Side B, “Life is a Changing Composition Flow” is not credited to Lee Roetman, though I’m quite sure the song is an original, with a few lyrics lifted from a Civil Rights-era protest song. The themes of the album are at once universal and rooted in their time. Before our current age of connectivity, information transmitted from the countercultural epicenters on the coasts reached the middle of the country with a severe delay and in very low resolution. The data packets were books, records, newspapers, and radio and TV broadcasts. When the wave of hippiedom had crested and broke in the Haight and Greenwich Village, it rippled on throughout the rest of the country on a smaller scale: a simplified ideology, a toned-down fashion, quieter music, weaker drugs. Or at least that’s the mixed metaphor that makes sense to me; I wasn’t there. I hadn't even been born yet.

The platitude goes like this: we live in world more connected than ever, yet we have never been lonelier. Whatever. This isn’t about that. I can tell you this though: since I was a teenager, books and records have helped me stave off loneliness. One of the things I love about used books and records and tapes is that there is no algorithm for discovery. It’s pure chance. I feel a bit new agey saying it, but the randomness of it reminds of the universal randomness that underlies everything. Peace and Love from Lee is a physical object that I own. It has weight, it takes up space on my shelf, and I can hold it in my hands. It exists because someone decided to make it exist, to take something as fleeting and ephemeral as sound and store it in the grooves of a record. Somehow it made its way from Iowa to Washington, and there it found its way into my collection.

As a collector, Benjamin was fascinated with the fact that each object in his collection had its own destiny, that each book could become a sort of vessel for remembering. For me, it’s similar, though markedly different. I could tell you where I bought nearly every one of my records, but the objects’ lives before they were sold to me remain a mystery. A ninety-nine-cent record from the Salvation Army does not come with any sort of document of provenance. What I have instead is Google. For Benjamin, the memory surrounding the object became the frame, the pedestal, the base, the lock, and when he unpacked each object, the accoutrements were unpacked as well. For me, the memories do not necessarily come with the object; acquisition is only half of it. I had to look beyond the object to find Lee, unpack the pieces of her life that I could find online and sort it all out.

And so here I am: unpacked. It is Fall now, and everything is more or less in place. The LPs have been sheathed in brand new polypropylene sleeves and alphabetized on their shelves (thank you, Zoe). My collection has succumbed to what Benjamin calls “the boredom of order.” There is a wall of vinyl organized beside me and a record spinning on the record player before me. Through the speakers Lee sings, strums her guitar. The record spins at 33 ⅓ revolutions per minute, keeping time with a quartz oscillator—yes, just like a clock. The stylus tracks the groove, the groove spirals inward, its radius contracts steadily with every revolution. The cartridge pivots on its tone arm toward the inner blank vinyl at the end of the record, perfectly called “dead wax.” The metaphor wants to write itself: this too shall pass. It’s true. But I can start the record over whenever I want, replay my favorite parts, and that alone is something.

Tyler Koshakow’s fiction and essays have appeared in The Rumpus, Big Lucks, Necessary Fiction, and elsewhere. He lives in Portland, Oregon, and tweets @tylerkoshakow. More at tylerkoshakow.com