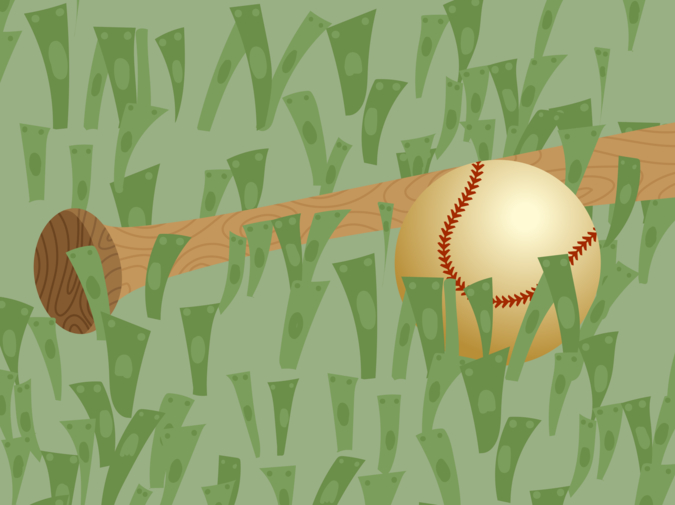 I pick up Henry after work and we drive 65 miles to the first game of Colin’s fall AAU league. It costs enough, but college is looming and some short-term discomfort for the chance at a scholarship is too enticing a gamble not to take.

Tom drives straight from work and meets us a few minutes before first pitch. The anthem plays and everyone whistles. The aluminum bleachers squeak and shudder as people settle in. Colin’s team huddles, and after a few words from the coach, they yell, Do Work, and sprint across the manicured field.

Colin skips to the mound, dirtying the spotless rubber, making it feel like home. His white cleats gleam.

I recognize a few people and smile at them. It's hard to have team spirit though. The boys come from different towns and are competing against their own teammates for scholarships.

Tom and I ask each other about the traffic. Henry watches the first pitch, a slider in the dirt, then pulls out a Jules Verne book.

Baseball is a special sort of boring. Players take turns performing, rarely interacting in a physical way. Tension materializes suddenly and dissipates before it can catch any momentum. Every moment seems to matter immensely and not at all. From almost every angle except immediately behind home plate, it’s impossible to see where the pitch goes. And from behind the plate, it’s difficult to find the ball after it’s hit. You end up understanding almost nothing but the result.

Tom paces during the games like a lion in a zoo, earnestly imitating the chatter on the field. He never even watched baseball before Colin. You could have convinced him the players run counterclockwise around the bases.

I was the athlete. The high school softball standout. The one who took young Colin out in the yard and taught him to throw. The one who spent childhood hours brainwashing him to love hitting a ball with a stick and chasing it around. It's my fault we're all here.

The leadoff hitter bunts after two pitches. It’s a tricky piece of bat work, leaving the ball spinning uncommittedly between Colin and the catcher. You can tell immediately they've never played together. Colin doesn't even throw to first base. Tom stomps his feet and yells stock advice. Something about being ready for anything.

It's actually a good sign. Not that Tom will notice. He's results based. He sees the box score. Not the meaning. Leadoff bunters think they don't have a chance. It's better to roll the dice, muck up the game with a gimmick, than match skill.

Two scouts are in the top row. They always cluster together. Doughy rolls decorate their athletic frames. Watching sports is ironically unhealthy. We sit, licking nacho cheese off our fingers, while the sculpted athletes swoop around.

One of them has a radar gun, but neither are overly concerned. They’re more interested in exchanging war stories from their playing days. Everyone treats them like religious oracles, giving them a ring of space and offering up silent respect.

The baserunner steals second on a curveball which strikes out the next batter, then advances to third on a weak roller to the second baseman. The clean-up hitter is jammed badly. A wooden bat would have broken, but the aluminum bails him out, stinging his hands as he sends a wounded quail over the first baseman's head, scoring the runner. Colin strikes out the next kid with four hard fastballs. He doesn't even check the baserunner.

It's an advantage for the other team, but it was mostly luck and circumstance. A manufactured run. Something more opportunistic than consistent. In a season as long as baseball’s, no play can have too much meaning.

Being a truly great player requires an acceptance of this randomness. A big picture perspective so you don't unravel, lose your edge when you surrender a run without giving up solid contact. It’s a game for grinders. Where even the best players fail the majority of their at-bats.

Tom trudges over shaking his head.

“How was work?” I ask to distract him.

The next inning begins, and Tom restarts his pacing.

The game stretches its legs and we win. Which culminates in fist bumps and the boys scattering. When Colin was young and played with the boys in his class there would be pizza and ice cream. The results of the game were quickly forgotten. As if the entire enterprise was an excuse to hang out with friends. The small nudge most of us need to remember we love the world and the people in it.

Now it’s work. The drills and practices and weightlifting and tape. We turn everything into work. Even the games we love.

Michael Harper is a MFA candidate at the University of Idaho. Previously he taught kindergarten in Vienna. His most recent work has appeared in Manzano Mountain Review, Grey Sparrow Journal, Litro Magazine, and Decomp Journal.