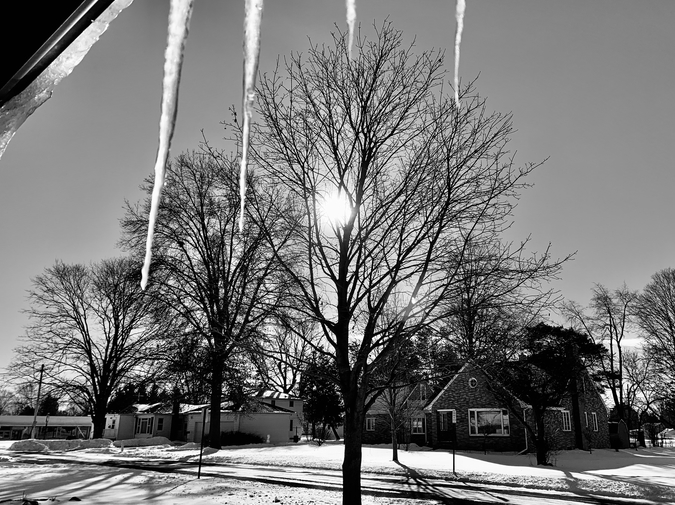 I sat in Algebra and thought about boys. Like magic, they appeared
outside the classroom window. Ms. Goss droned on with her impossible

equations while I watched two rugby-shirted blondes pass briskly
just beneath the glass. No one else seemed to note their progress,

all heads bent studiously to hieroglyphic sums. Some thought it strange
that our school sat surrounded on all sides by corn, but I liked

the swaying stalks, tall and tightly aligned in spring, a bright green
army. I noticed the boys were dragging something between them,

spied a shock of dyed blue mohawk and Misfits-stickered skateboard
that bespoke sophomore thrasher Bob Tosh, and when his head snapped

side-angle, I saw his zero of a mouth shouting something solved
into silence as the planted rows swallowed them all. Here was math

I could follow: two boys clad head to toe in Polo + one trailer park punk
whose dad had inexplicably gone to Harvard = a beating in the fields.

How dare he? How dare any of us, I mused, scanning the room for an ally
who might take the hit instead of me. When no one met my eye, I began

to raise my hand half-heartedly to tell, felt a sharp kick to my shin. Susan,
the cheerleader assigned a seat beside me, who liked Hallmark cards, gin

and tonics, and her sleepy quarterback boyfriend, was displeased. He
was asking for it, she whispered, then passed me a Luden’s cherry cough drop

in solidarity. Well, I tried, I thought, placed the sweet spoils on my tongue
and wondered what it felt like to be punched. Outside, late afternoon sun

bled fading orange over tall corn inviolate and solid, a wall impassable
even if someone wanted. Pay attention, Ms. Goss said then, or you’ll fail this class.

On our Christian ski trip in a sad Wisconsin town, Chad Vedder stood at the lip
of a vertiginous drop, waved shyly, then vanished from view, down the Black Diamond

backwards. I often watched his circles around our high school track in gym, running
in a way I’d never seen a human run before, like his body was created for just this sum—

sunny day + long legs = twenty perfect laps. His race was middle distance and, as track manager,
I had seen him take the 3000 meter in eight minutes flat, a record at state. But backwards

down a mountain balanced precariously on cheap rental skis? What kind of animal was he,
and could I be of the same sleek species? It was more than speed, it was beauty, too—

an ineffable grace that marked him, surely, as chosen. We were learning so much on this trip
about God and his plans for us, how he would give with both hands if we only agreed

to meet him halfway. For us girls, this meant covering arms to the hands and legs to the calf,
carrying our Bibles everywhere, even class, and praying to be more like Mary, Mother of God

so as to avoid hell. For boys, rules seemed looser; no dress code required and larger cast of characters
to copy, like stern, waters-parting Moses, and Paul, who got to be naughty then good once scales fell.

When I accidentally opened the door to the wrong room on our trip’s second night,
reproachful chaperones shook their heads and sent me away; men guarding boys

all bent to the ground and weeping, I repent, I repent! And later that same night, lost
on my quest for ice, I opened a wrong door once more to find Chad and Missy Brady

intertwined, only pausing their unclad clutch to whisper-scream that I leave. One more makes three,
I thought, feelingvery Jesus-y and beleaguered to be shut out twice, as though Peter himself

had betrayed me.Would I never know sin wicked enough to bring me to my knees, or grow
physical attributes so ample that handsome track stars would seek me out in the dark? I knew

those thoughts were not appropriate for virtuous women, but I had them anyway, stewing
over Bible verse flashcards in my hotel room while roommatessnored in blameless sleep.

That long night was the beginning of the breach, a falling away, eventually,from my faith.
But demands of the story follow me, and though the good book says no prophecy ever arose

by will of man, still there were those who spoke from God when moved by the Holy Spirit. Whatever
speaks through me today, be it celestial or earthlier, I look back to tell trip guardians of our purity

that they were too late, and what possible business was it of theirs, anyway? I say to Missy Brady,
reconsider the move to Florida and aerobics studio purchase, you will regret both come 2020. And

with my final prophecy twenty years too late, twenty laps around the sun, I speak to Chad directly—
forsake your sacred motorcycle. Who wouldn’t long to feel the wind blow past the way it did in youth?

You can never return to the track. A hard truth, heaven knows, but heed me— delay the wreck
and coma. Take a longer backwards way and savor that last downhill run, the final door to close.

Laura Bandy attended the University of Southern Mississippi’s Center for Writers PhD program from 2009 to 2013, where she received the Joan Johnson Poetry Award. In 2018, she won first prize in the 'Trio of Triolets' contest and received third place in the Gwendolyn Brooks Poetry Award/ Illinois Emerging Writers Competition that same year. Her chapbook, HACK, was published by Dancing Girl Press in August 2021, and her full collection, MONSTER MOVIE, will be published by Gold Wake Press in December 2022. Laura hails from Jacksonville, Illinois, home of the Ferris wheel.