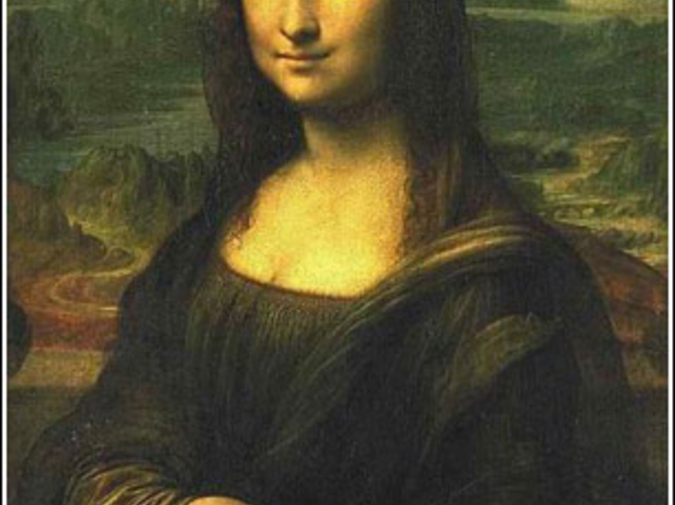 The apartment smells of burnt toast when Marcia arrives home from work. Her husband, Gary, having toasted two loaves that afternoon, hovers over the linoleum kitchen counter cutting slices into perfect one-inch squares. An artist, he is replicating Mona Lisa, gluing the small squares (ranging from lightly toasted, for highlights, to burnt black, for shadows), onto canvas. While impressed by the remarkable likeness to the famed portrait, Marcia worries about its salability. After all, it's made of Wonder Bread.

Marcia is finally fed up, as this summer (one of New York's hottest on record), marks three years of Gary's seemingly futile pursuit of representation in a gallery while she shoulders their rent and most of their bills. This past spring, they sent another round of digital images of his most recent oil paintings to over two dozen galleries. No interest. None.

Wiping his hands on his jeans--crumbs falling to the floor--Gary slants his head to contemplate his latest work of art. He turns to Marcia and says, with considerably too much enunciation: "Commodified on postcards and coffee mugs, Mona Lisa has become meaningless, on par with McDonald's golden arches, symbolizing the overplay of images competing in contemporary society."

Marcia is surprised at the revulsion that rises from deep within her, like a volcano. Gary's comment is the kind that captured her heart when they first dated four years ago in graduate school at Hunter College. He was getting a master's in fine art and she was completing her master's in business. An unlikely couple, yet, it was Gary's radical political stance, his insights and intelligence, that drew her--an antidote to the Polo and Abercrombie boys in business school with their dreams of big suburban homes and big cars. Now she sees those men in khaki suits and striped ties swarming about her Manhattan office. She can't ignore the gnawing feeling of regret--as they move their stay-at-home wives and a baby or two out of the sweltering city into freshly painted colonials in Westchester with backyards and swimming pools. She feels like a fool.

"Lorna, exactly when did I become an idiot?" she asks her old college roommate and best friend, that night. They're sipping Heinekens from bottles in a downtown bar. The drone of a Bob Dylan song is barely audible beneath the jabbering happy hour crowd. "Be honest. Really."

"OK--about twenty minutes ago when we sat down here and you told me you're basically giving up on Gary. You love Gary. He's in a funk. You hated Marty and those assholes you dated at school. "What was your nickname for Marty?" Lorna likes Marcia's Yiddish phrases.

"Yeah, that's it. What's the translation?"

Lorna purses his lips into I-told-you-so, throws her head back and swigs her beer. Then asks, "What's going on in bed?" knowing that was always a strength in their relationship.

Since their college days, Marcia has told Lorna everything, but now Marcia guards her most important secret... she's thinking of leaving Gary. She knows she's selling out--love for money--and is embarrassed by her embrace of values she once despised. Tuned to assess everything by its marketability (her focus of study at school and the gist of her job at New York Style magazine), she wonders if she still has what it takes to nab someone new, someone with money.

In the fish tank fluorescent light of the ladies room, Marcia sucks in her protruding abdomen, twisting to see her once apple-round ass, in the mirror, flat and low. Smoothing her skirt, fluffing her hair, she fears that she resembles her mother. Marcia recalls her mother saying that Gary "wasn't ambitious enough," her mother's code for "not rich enough," when Marcia announced their engagement.

Doubtful of her appeal, Marcia allots more time than usual to her appearance the following morning--blow-drying her shoulder length hair straight, lining her green eyes with lilac, slipping into stockings and high-heels. She's noticed Roger, the new VP, glance her way more than once, his eyes lingering that extra bit. Marcia has no real plan, except to boost her confidence, to see if she can still play the old games.

By mid-morning, a bit of luck brings Marcia and Roger together for a meeting in the conference room, and an encounter in the elevator provides an added rendezvous, although Marcia rode the elevator with no real purpose throughout the lunch hour. Her flirtatious smile earns her a get-to-know-you drink, downstairs at Sarabelle's, turning the remaining hours of her workday into mush. Unable to focus, Marcia sits paralyzed at her desk, staring out the sixteenth-floor window at the tiny toy-like figures and angles of concrete below. Yellow taxis and grey buses stop and start on a neatly-drawn grid. Her mood vacillates from excitement to dismay. After checking her personal e-mail, she peruses impossible-to-afford vacations, lingering on a website showing tourists milling about the remains of Greek temples, their Doric columns crumbled.

Marcia and Roger take high, slippery seats at the varnished cherry wood bar. Frank Sinatra is crooning overhead. Marcia hates Frank Sinatra. Mirrors make a glitzy backdrop to the rows of oversized bottles of wine, exotic beers and liqueurs. Marcia's reflection is split in two by a bottle of Beefeater's Gin. Grabbing some peanuts from a bowl, Roger shoots them, one by one, into his mouth from his fat, fisted hand. After removing his gold-buttoned blue blazer, he loosens his tie. Not a terribly bad looking guy. OK, almost good looking. Nodding to his monotone stream of conversation, Marcia's mind-chatter plans two errands she must run on her way home. Having reached a question, Roger is hanging on the protracted silence, waiting for her reply. "Oh, sorry, I was... what was the question?"

Roger's initial inquiry, "How long have you been working here?" launches a relentless oral exam: "What does your father do? Which part of Fort Lee? Which gym? Scuba dive? Been to Europe? Which building? Own or lease? Car in the city? Hamptons?"

A wave of nausea overcomes her; a fierce headache descends like an unwanted houseguest. With her chilled miniature fork, she pushes pale shrimp through spicy cocktail sauce on her gold-rimmed plate, then sips her white wine, so dry her lips curl in. Without warning, as if her actions were determined by another, Marcia pulls her always-reliable fake phone call... sliding her hand into her purse, ringing her cell, searching to answer it. "Hey, Loma, what's up? Oh, no, that's terrible. OK--stay right there, I'm getting in a cab." Marcia performs this routine while rolling back her eyes and making faces of exasperation to Roger.

Her feet throbbing in high-heels, her plastic-covered dry-cleaning hanging stiffly, like a corpse, over her sweaty arm, Marcia unlocks the apartment door and flicks on the overhead light. Gary is asleep on the sofa. His bare, lean torso is paint-splashed pink and red; his curly black hair surrounds him like a squall. The radio is off station and the static obliterates the song. On the wooden easel rests a nearly completed oil painting of Marcia--Gary paints her portrait, each year, for their anniversary. He has portrayed her walking a path lined with foliage. Her head turned back, her expression sorrowful, she walks away. Plants in the foreground past their bloom, their pink and red flowers litter the ground.

Amy Abrams is a former New Yorker, who now lives in Arizona. In addition to writing fiction, she has contributed hundreds of non-fiction pieces about the visual arts to national and regional magazines including Art & Antiques, Southwest Art and Arizona Highways. This is her first published short story.