Without A Happy Ending 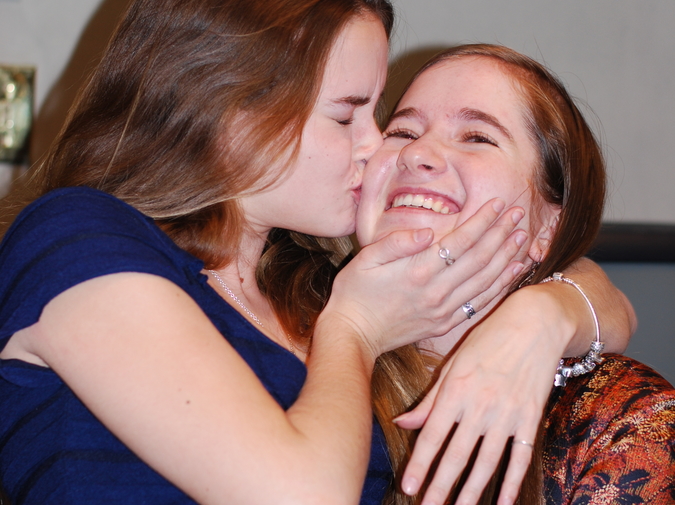 [The following essay discusses suicide. If you are feeling suicidal, thinking about hurting yourself, or are concerned that someone you know may be in danger of hurting themselves, call the National Suicide Prevention Lifeline at 1-800-273-TALK (1-800-273-8255). It is available 24 hours a day, 7 days a week and is staffed by certified crisis response professionals.]

In my dream, Sarah and I are looking for face wash at a pharmacy. She examines several clear plastic bottles before placing one in her basket.

She turns to me and puts her facewash back.

“I don’t think I can do this anymore.”

I know she means living. I hug her and cry. She starts to cry too. Then she leaves the store, and I wake up.

In reality, Sarah is already dead. She killed herself. Neither her friends nor family— not even her twin sister Erin—had any idea she was suicidal. The only time I had a conversation with Sarah about how she felt was in a dream.

I met Sarah and Erin when we were ten. We bonded while putting up decorations for the school Halloween party. I only befriended them by happenstance: I’d forgotten my math homework and had to come back to the school after hours. I noticed kids pasting decorations to the walls. The twins invited me to join them despite the physical tussle Erin and I had gotten into on the playground a few weeks prior.

In middle school, Sarah and I sewed matching satin dresses and got in trouble for not wearing shoes to class. Friends called us Sara(h)^2. We made the worst omelet I’ve ever had when we decided to create a meal out of only what we could find in my yard. The ingredients turned out to be chives, eggs from my mom’s chickens, and dandelion greens which neither of us knew how to cook properly. Even though they were bitter, we decided dandelions, both beautiful and useful, get a bad rap as weeds. We declared them our favorite flowers.

When her mother decided to foster a litter of kittens for the local shelter, Sarah fell immediately for the runt. She showered him with affection and care and convinced her mom to keep him.

Sarah and Erin’s home was a ten-minute bike ride from mine. I tried to spend every weekend at their house. One night, when the three of us were bundled into their guest bed surrounded by fluffy blankets, two dogs, and three cats, Sarah turned to me and said, “tomorrow, when you are alone doing your homework you are going to wish you were back here.” That snapshot in time stuck with me. When I was lonely at college or fighting with boyfriends or taking exams I would return to that moment of total safety and wish I was there. In one way we were always together. The three of us texted every day in our group chat, though sometimes we only sent cat photos or hearts.

It’s not that everything was perfect. Sarah and I fought all the time — at home when her family rented part of our house for six months, on the streets of Amsterdam over something I can’t remember, in Ontario because I pushed her into a puddle after one of her jokes hurt my feelings, on a road trip in Iceland over who was responsible for us almost getting gas with the car engine still running. We joked that Erin couldn’t leave us alone for more than a day or we would kill each other. But she was also the most caring friend I could ever imagine. When I missed the city bus to get to my summer internship one rainy morning during high school, I called Sarah. She was still in bed but she got up, picked me up at the bus stop, and drove me to my job.

Sarah drove nine hours to my college graduation. She sent my roommates into riotous laughter by making a show of finding a Tinder date to avoid attending the commencement musical with my family. Several of the men she matched with were part of the musical and they tried to convince her to watch it.

I won’t get to see her graduate because she will never finish her degree. I don’t think I ever thanked her for sitting in the hot sun for hours just to see me get mine.

When Erin called me to tell me Sarah was dead, I threw a glass cup at a tree by my balcony because I wanted to watch something break. The glass missed the tree and fell to the earth below unshattered. I fell to the floor and screamed.

Fire season in California, where I was living when I received the news, started shortly after Sarah’s death. Thick smoke hung in the air making 10 a.m. look like dusk. Neighbors made evacuation plans, but I felt like staying. Part of me welcomed the smoke-darkened sky. If Sarah was gone, everything else should burn away too. An apocalypse made more sense than life as usual.

After Sarah died, I lay awake in bed thinking about her final moments and wondering what was going through her mind the days, the weeks, and months before she died. I wanted so badly to tell her I loved her and ask her why she made her decision. I wanted to tell her I was sorry that I had been so caught up in my own life that I kept forgetting to call her. I wanted one more conversation more than anything in the world.

I was also furious. My anger was unexpected. I had never been critical of people who committed suicide before, but resentment flowed through me uncontrollably.

“She didn’t ask anyone for help,” I told my boyfriend while lying in bed one night. “She just opted out of life and abandoned everyone who loved her.”

In the months following her death, I had recurring nightmares. In my dreams, I travelled back in time to the days before she died. I tried and tried, but I was never able to save her. In one dream, I knew it was the day Sarah was going to die and I had to find her. I searched frantically only to find her dead body moments too late.

While I dreamt about her death, it became more difficult to conjure up memories of her life. The harder I tried to relive scenes with her, the blurrier and more distorted they became. I messaged a close college friend of Sarah’s to ask for videos she had shot of Sarah, anything to keep her voice and laugh from fading in my memory. Her friend sent clips of Sarah using a diabolo, dancing in the rain, and modeling a magician’s outfit for Halloween.

We began an email exchange about our grief. I confessed I was angry with Sarah. Her friend told me it was unfair to blame her. She reminded me that Sarah was very sick; that no one would call her selfish if cancer had killed her rather than mental illness.

When I visited Erin a few weeks later, Erin and Sarah’s mother revealed she had read Sarah’s diary to try to understand what had happened.

“It’s in the top shelf of her dresser if you want to see it,” she told me. “She didn’t think she was smart enough or good enough. I don’t think she gave herself a chance.”

The diary didn’t have many entries, but it revealed how lonely Sarah had felt. In words she never shared out loud, Sarah worried that she treated people badly and wasn’t a good friend. She constantly felt anxious and wrote that she could only escape the feeling when she slept. She wrote about how much she missed her father, who had died when she was a child. I don’t— nor will I ever— fully understand the pain she was in, but encountering her diary forced me to realize that she had been hurting for a long time. I wish she had been able to share her pain with those that love her.

I will never know what final trigger made Sarah decide to end her life. Some of my friends have told me that I’ll never find a rational answer to an irrational choice.

There are dozens of photos of Sarah, Erin, and I growing up. In one from 2018, we are standing on a beach during sunset after a pre-wedding picnic for their brother. We are wearing summer dresses and our feet are bare. Sarah’s arms are around my waist. She is leaning into me and laughing. I had no idea then that she would only live another two years.

When I started to write about Sarah I wanted to end on some kind of uplifting note or with some sort of wisdom. Part of me hoped that by writing an essay with a hopeful ending I could force myself to feel hopeful in real life.

Unfortunately, there is no closure, no silver lining, when the life of a beautiful, young person is cut short. In a time when hundreds of thousands have perished in a pandemic, a neat ending isn’t a guarantee for any life or any story.

Sara Tabin is a journalist from Utah. She doesn't normally write about herself, but her fiction has appeared in Rathalla Review.