He tells me Bob Ross was in the war in Vietnam 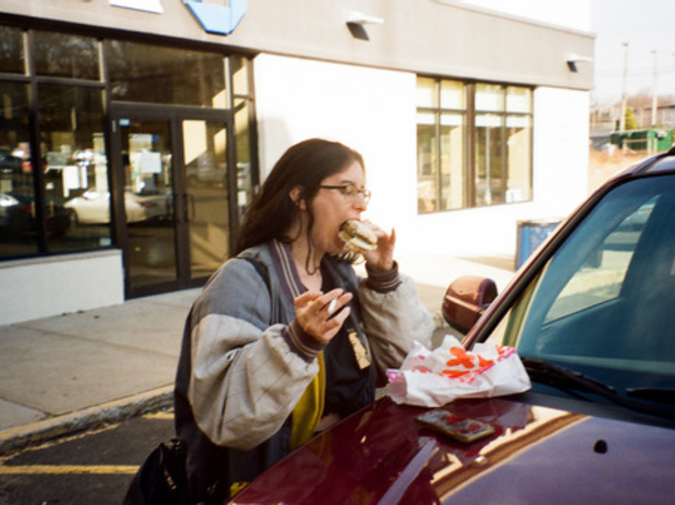 “Life is about preparing for the unknown, especially at roundabouts,” he says, withdrawing the directions from me, holding my phone away.

He tells me Bob Ross was in the war in Vietnam.

He says, sighing, sitting back, withdrawing, “You have to go to the worst to be able to be calm. You have to see the extremes just to know how bad it can get.”

I cling onto all of his words. When we are talking about our hypothetical children, I am thinking about how I will remember this and probably use it against him. Definitely use it against him. I offer him a ride to Park Slope and he says really? You don’t have to do that. You won’t get anything out of it. and I will do it anyway. And I will, in the future when he is refusing to love me the way I want, say, I’ve done so much for you. I drove you to see your parents in Park Slope.

We are making plans for a trip in a month. When he withdraws, like he always does, then I will use everything against him. His words are concrete, just like these, so it’s easy.

Or not. Maybe he will give in and we will go away somewhere nice. My professor grew up in Soviet Russia, and says it is not somewhere nice. She told me that when she was a kid she tried to help the teacher by putting little stickers on the classroom wall. But she was clumsy, not good at that type of stuff. When she finished and the teacher walked in, he said: “I want to rip your arms out and put them back in the wrong way. And then take a machine gun and shoot you.” She is not clumsy anymore. She is very good at that type of stuff. She’s an art professor, and she tells this story as she is wiping off a translucent slab onto which she mixed paints.

Maybe we will go to Virginia. It is so lovely there—warm, full of nature.

Maybe we will go to Maine. Cold, full of nature.

He’s telling me about how he saw a man get shot at the corner deli. He points to it out the window. I don’t need to look because I know which one he’s speaking of. He says he saw the man in a pool of blood on the sidewalk. He had to talk to the cops.

He says this because there is a loud bang like a gunshot. He says you know a gunshot when you hear one.

The next night I am home and at 10 P.M. I realize, again, that he’s right. The cops use caution tape to section of a part of my street. I am in bed, arranging my pillows in a way that will make it easier to drift off.

The night before Easter he ties his belt around my neck and gives it to me to hold. I’ve been smoking all of these disgusting vapes, and his—a nondisposable Caliburn—doesn’t hurt my throat like the others do. It creates a cloud of thick smoke as opposed to the small mist I’m used to. Now my neck—the wall protecting my throat—feels the hardness of the leather, the euphoria of pain and asphyxiation. He turns the ache inside out, enlightenment.

When I walk into his room, he’s sitting there, drinking wine, rolling a joint, and singing along to Neil Young. We start talking about my fear of death. He tells me it’s common; I say it doesn’t feel common to me, it feels colossal, paralyzing. “You can change your belief system,” he says. I say I’m sad because I never want to die—I want to listen to music. “You can. You can listen to music forever if you decide to.”

He asks if I go to church on Easter, and I say that my family gave up on that a while ago. I pantomime praying and look up to the ceiling and he says: “If you’re gonna pray in here, look at me.”

We will not be going away together. He will be going away from me, drifting off to wherever it is he hides. Then I will go away from him, pretending it’s out of spite, as if he cares. And when I run back to him, he probably won’t even be there. His words, I have them, they’re concrete, the little characters drawn out on paper like religious icons, but he is a ghost, I’ve done so much for this outline of a man, expected so much from a shadow.

Every God is hollow. I don’t go to any church anymore.

Danielle Chelosky is a New York based writer who grew up on Long Island, attends Sarah Lawrence College in Westchester, and lingers in Brooklyn. She mostly writes about music for places like Paste, The FADER, and Kerrang!, but in her spare time she indulges in personal essays. She embarrasses herself on her Twitter at dniellechelosky.