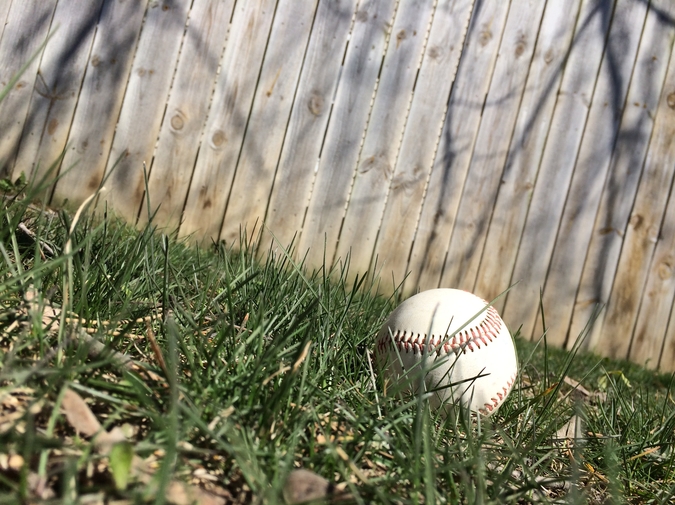 Parker’s mental damn busts open the second he sinks a cleat into the batter’s box.  The stomps and screams of 42,000 fans are enough to make him spin back for the dugout, not to mention the total situational awareness flooding his brain: bottom of the eleventh, two outs, bases juiced, and a new relief pitcher up on the mound with one pitch to his name—a 95 to 99 mph heater served up in a two- or four-seamed variation—brought in just to face him, the little-known thirty-one year old utility player quietly released on waivers at the end of July and traded in a last minute deal to Band-Aid a team plagued with injuries.  Which turned out to be the luckiest move of his career—going from riding the pine with a losing team, to starting every day for a team battling for the post season—a move that’s brought him all the way to this tiebreaker playoff for the Division Series.  Which his new team could win.  Which he could win with one solid crack.

Parker rocks a 30-ounce timber—the lightest of the six bats he owns—back and forth over the plate as he waits.  He’s been traded and dropped down to the minors more times than he’d like to admit and understands he needs to be remembered right now by the players and coaches and fans surrounding him.  The spotlight, the pressure, the chance to stand out is exactly what he needs.  He’s dragged his wife and daughters around with him from team to team, city to city, for too long.  It’s burned them down.  He sees it in their eyes and hears it in their half-hearted encouragements—the depletion of hope—and realizes they’re not sure he’ll be able to fight for his job much longer.  But he’s always lived his life with a bat or ball or glove in hand, and he can’t fathom earning a living in a field beyond the one he’s digging into, legs compounding, hands cocked like the hammer of a pistol, eyes locked in on the reliever’s release.

“Steeeee-riiiii,” the umpire screams.  The ball blurred across the heart of the plate, belt-level, just like he knew it would.  He hates how every coach he’s ever played for makes him take the first pitch in critical situations, to watch and learn and hopefully get ahead in the count.  But the first pitch is always the fattest, a no-brainer fastball right down the pipe.  Parker stays in the box and tries to forget the gift he just saw, the one he won’t see again, and breathes deeply as he rocks his bat.  He waits for the reliever to bring his hands together and tries to build up another damn to block his relentless thoughts and the jarring noise of the crowd.  As soon as the reliever sets, he feels the catcher creep towards him, his target moving high and tight.  But as the reliever pushes off the mound, he releases his four-seemed fastball too early, and the ball, once set free, spirals towards his skull.

“Foul-ball” the umpire screams.  Parker looks up for confirmation, sprawled out on the ground.  He felt the wild pitch ricochet off the tip of his bat, raised back at shoulder height, sticking up like an antenna above his helmet.  He managed to clear his head but not his bat, which couldn’t have been a worse outcome for him or a luckier one for the reliever.  He gathers his wits while a batboy runs for the ball resting against the backstop.  The umpire squats down to show him his hands: a clenched-fist left, a two-fingered right.  “No balls, two strikes,” he tells him, then, “take your time.”  But he doesn’t need time.  And he doesn’t notice the chants of 42,000 fans intensifying as pushes himself up off the dirt and seizes his bat.

Parker locks eyes on the reliever and stands slowly.  You or me, he thinks, you or me.  He knows they’re both lucky the game didn’t end on a wild pitch where their actions wouldn’t have deserved remembering.  He wants nothing short of sending a ball to the bleachers.  A single or double or hit-by-pitch walk-off won’t be grand enough to cement him in people’s minds.  It’s going to be me, he thinks and digs into the front corner of the box, as close to the mound and plate as he can manage.  He never breaks eye contact with the reliever, never reveals a single expression after the wild pitch or making such a dramatic shift, back to front, in the batter’s box.  It has to be me, he tells himself.  A clod of dirt falls from the sleeve of his uniform as he rocks his bat, which he now imagines to be the trunk of an old growth Sugar Maple, the way the bat existed before it was cut for length and width and whittled down, so massive in his mind but light in his hands.

He feels the catcher moving away, setting up low and outside like he’d hoped, and waits for the reliever to set.  He hasn’t given them many options to aim anywhere else with his stance, especially after losing control on the wild pitch.  He waits and prays he can whip his lightest bat around fast enough.  The reliever takes his time setting, minding the runners taking leads from first and second and third, then reels back and delivers, in the briefest of moments—less than half a second to span 90 feet between the mound and home plate—a two-seemed whirl of parallel red lines from his fingertips.  But he saw it coming, lower and more outside than he wanted, but close enough for his arms and legs to respond in a way that makes him feel as if he and the reliever aren’t working against one another.  He feels drawn to the reliever’s trajectory, his back leg digging in as his left lifts and points in the direction of first base, his arms pulling then pushing and twisting the Sugar Maple in his hands, his body utilizing every muscle to reach out and go with the pitch.

Crack.  He doesn’t hear the sound.  But he feels the solid, sweet connection on the meat of his bat and prays to God the ball goes deep enough not to be caught.  The ball gets so high that he thinks he must have looked like a golfer swinging a 9-iron.  He drops the bat halfway to first, watching the right fielder sprint back towards the wall, with an eye on the ball as it starts its descent and the other on the wall.  Parker rounds first and sees him stick his free hand out for the wall and raise his glove with the other.  The right fielder slows, crossing over onto the warning track, preparing to jump, which is all Parker can bear to watch and wonders if his wife and daughters feel the same.  He rounds second and looks toward third, towards his third base coach and his teammates in the dugout and the three decks of fans beyond—everyone on their feet and looking over his shoulder, praying the same prayer as him, wanting so badly to jump and scream.

Kyle Bilinski works as a flight attendant and painting contractor and lives with his freckled wife and snorting Shih Tzu in Boise, where he’s fixing up a sixty-seven year-old house.  His work can be found in places like The Baltimore Review, BULL, and Monkeybicycle.  What’s more, he’s a lifelong SF Giants fan, thanks to his old man, who often stood inches from the television during the 2010, 2012, and 2014 World Series games, offering Bruce Bochy endless advice and opinions.