When I Am Delilah 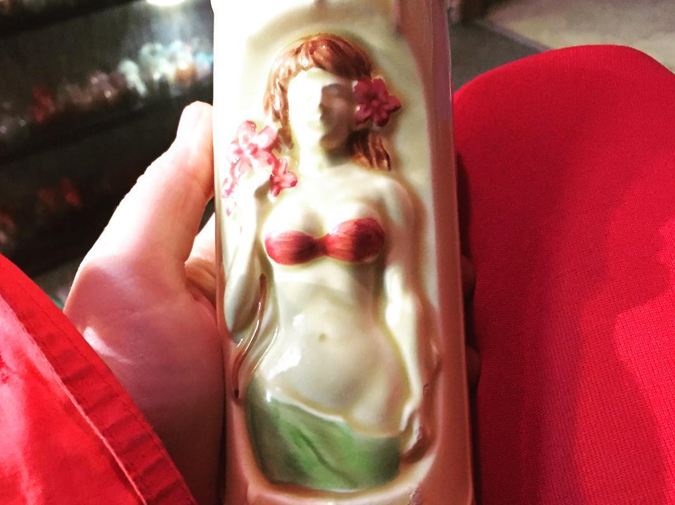 “Virtue will cut your head off, vice will only cut your hair.”
— Honoré de Balzac

According to Judges 16:6, “Delilah said to Samson, ‘Tell me the secret of your great strength and how you can be tied up and subdued.’”

Delilah was a Philistine, a spy commissioned to lure out the secrets of her enemy king, the Israelite Samson. The source of Samson’s brute strength had long been a mystery, but the king revealed to Delilah: his strength was his long hair. “No razor has ever been used on my head,” he said, “If my head were shaved, my strength would leave me, and I would become as weak as any other man.” I’ve long imagined Samson as Fabio from the I Can’t Believe It’s Not Butter!Æ  commercial circa 1996, his powerful frame softened by golden locks hanging below his shoulders, hawking the taste you love without the cholesterol.

Delilah had Samson in the palm of her hand, in the crux of her razor. Leonard Cohen immortalizes the end of the fable, singing to Samson: “She tied you to a kitchen chair / She broke your throne, and she cut your hair / And from your lips she drew the hallelujah.” Henceforth Delilah became an archetype, a name meaning treacherous woman.

According to the BuzzFeed quiz “Which Bible Character Are You?” I am Delilah.

“You’re crafty and wise,” the quiz’s benevolent gods tell me, “You fight passionately for what you want, and inspire others with your ability to get it.” My mother might agree, explaining how from the day I was born I had my otherwise stalwart father wrapped around my tiny, premature pinkie. “Shit,” she tells me now on the phone, “that man won’t lift a finger for anyone else but he’s always been at your beck and call.”

She is not wrong. I may not be my father’s favorite child, but I am his most beloved, the one who can call him in car trouble or money trouble or any kind of feasible trouble and receive help my siblings would likely be denied. I receive his blessing of advice or money with a sigh, a “Thank you, Pops,” a smile into the phone that here is my father, and I am not forsaken.

Perhaps I am Delilah, wanton in my ability to coax what I want out of heterosexual men. I flatter them. Mr. Schutz, my eighth grade biology teacher, into changing my C into an A-. “I’m sorry my brother killed himself while I was in your class,” a single crocodile tear forming in the crease of my right eye, “but you’re the only teacher who has made me care about science.” I did not, I do not, care about science. Owen, my Crossfit coach, into buying me drinks at our gym’s Christmas party. “I wish I could wear shirts this tight, but I just don’t have the biceps yet,” I rub his arm, “Your girlfriend is a lucky woman.” I did not, I do not, need another drink.

My department chair into giving me more research funds. My barista into giving me free almond milk. My brother into mowing our elderly parents’ yard. Yes, I have a knack for coaxing out of straight men what I want, though women and fellow faggots smell right through my Delilah-bility.

The problem with quizzes like “Which Bible Character Are You?” populating BuzzFeed and Facebook, Tumblr and any number of online outlets is that they play into the worst of both our collective and individual neurosis: ardent narcissism in a cultural moment of battling egos and ideologies. Straight men give me what I want neither because they want to sleep with me, nor because I deserve it. They give me what I want because I flatter them. It is a tit for tat that makes the world go ‘round, perhaps, but also the world go awry.

Another Delilah of post-modern America: the conservative commentator and homosexual provocateur Milo Yiannopoulos. Milo and I couldn’t be more politically opposite. He dismisses the gender wage gap as a feminist myth and lovingly refers to Donald Trump as Daddy; I dismiss the second amendment as the white patriarchy’s way of securing absolute power since 1791 and gaze lovingly at the portrait of Karl Marx hung in my office. At the height of his cultural relevancy, following Trump’s electoral victory in the early months of 2017, Milo was a senior editor for Breitbart News under contract for a new book, Dangerous, with a quarter million dollar advance from Simon & Schuster.

On the February 16, 2017, episode of HBO’s Real Time, liberal firebrand Bill Maher prods Milo on his signature trolling of progressives through teasing and the rhetoric of triggering. (Milo had built much of his career on making fun of groups liberals consider politically Other, dismissing feminism, Islam, transgenderism, social justice warriorism, anti-capitalism, Black Lives Matter, political correctness, and other such movements as anti-free speech and personal liberty.) When it comes to liberals, Milo turned to Maher, batting his false eyelashes, “you’re literally the only good one.” For the rest of the interview, Maher is putty in Milo’s soft, manicured hands (the vibe is “chummy and conciliatory,” the New York Times reports, a vibe for which Maher was rightfully attacked). What led to this ambiance between opposites is a winning flattery Milo and I both know well. It is a winning strategy we have learned from the biblical example of Delilah, a woman who took down not only a strong king, but also his kingdom.

“Why did Samson avoid arguing with Delilah?” my father asks when we finally get to leave church one Sunday morning. We rarely get to leave our church, a megachurch of several thousand on Highway 65 between Springfield and Ozark, Missouri, before one in the afternoon. My father is a parking attendant manager. He spends his Sunday mornings directing cars into the crowded parking lot and coordinating shuttles to off-site parking for this church nobody expected to become this big. He’s proud of this job, of this service he provides, of the men with which he directs traffic like a maestro. One of these men, Rick, is a hillbilly who went to bible college but couldn’t hack it as a pastor so he spends his Sunday mornings with my father and their friends, telling corny jokes instead of drinking beer and talking about women.

My mother and I sit in the mini-van waiting for Dad, listening to 96.5, Hot Hits FM (my choice) until my father gets in the car and quick, turns the radio off.  “Why did Samson avoid arguing with Delilah?” he asks. My mother groans; I stare out the window. “He didn’t want to split hairs,” dad laughs, driving us to Yen Ching, the Chinese restaurant where we go every Sunday. I’m too old for this shit, I think. Fourteen and too old for my dad’s jokes, for Sunday lunches with my family, for church, for God and all this shit.

At fourteen I didn’t know the power I held yet: of using flattery to get what I want. Had I not acted out the stereotype of the sullen queer teen slumped against the mini-van window, had I laughed at his joke, would Dad have allowed me to quit church and take classes every Sunday at the local community theater like I wanted? Probably not. Had I laughed at his joke, could we have listened to the radio station I wanted to listen to (Goo Goo Doll’s Iris came out that year, and because the boy I was in love with loved them I wanted to listen to the radio non-stop)? Probably.

On December 2, 1877, the French opera Samson et Dalila opened in Weimar, Germany, a secondary, perhaps tertiary, location for debut because the opera was deemed too risqué for stages in Paris or Berlin. The opera is largely forgotten, save a section titled “Bacchanale;” bacchanale, Michael Kennedy defines in The Oxford Dictionary of Music, “an orgiastic musical composition.” In Samson et Dalila’s “Bacchanale,” Delilah dances and sings to taunt Samson, to turn him on, to flatter him a virile king, to get what she wants. Her dance is backed by a soft oboe, a solo that, like an orgasm, builds until it overpowers its participants. The scene leaves Samson panting, ready to give Delilah what she wants. The scene leaves Delilah ready to get it.

On the surface, the bible offers few, if any, role models for gay boys like me. So we’ve adapted, found our divas and emulated them, consciously or not. Perhaps this is a mode of survival. Perhaps this is a mode of camp. Perhaps this adaptation is both. It’s fun, I know, being Delilah, a coquette always primed to get what she wants, no matter how hard she has to work for it, no matter the power-holders she has to flatter to get it. Today I take the BuzzFeed quiz and get Delilah, not John the Beloved or Judas as I suspect I will. Then I read Judges 16 for the first time in a decade. When Delilah delivers Samson as captive, not king, to the Philistines they sing “Our god has delivered our enemy / into our hands, / the one who laid waste our land / and multiplied our slain.” Samson had imprisoned these people for years in the name of God (an apt metaphor for the modern state of Israel, indeed).

Our — the men like Milo and me, men like our godmother Delilah — ability to flatter is a gift, it becomes clear. I pray we use it to topple kings.

D. Gilson is the author of I Will Say This Exactly One Time: Essays (Sibling Rivalry, 2015); Crush, with Will Stockton (Punctum Books, 2014); and Brit Lit (Sibling Rivalry, 2013). An Assistant Professor of English at Texas Tech University, his work has appeared in The Threepenny Review, POETRY, The Rumpus, and as a notable essay in Best American Essays.