What a Weird Game of Dominoes: A Conversation with Alex Jiang 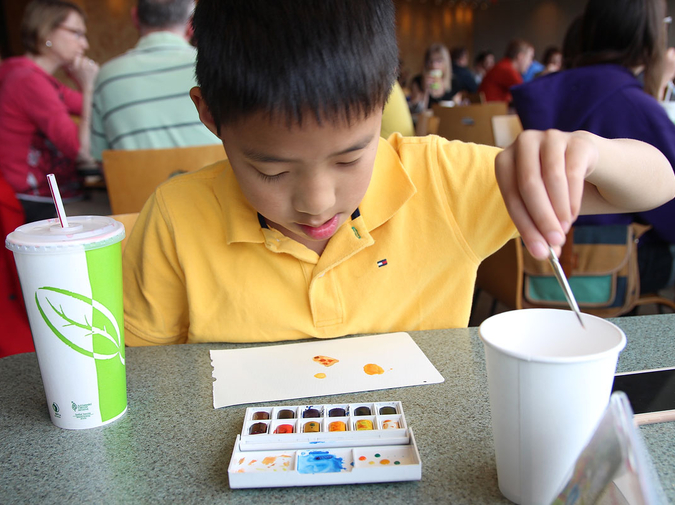 Last fall, Aaron tweeted something about accepting a few comics from a nine year-old. We’d soon discover the boy’s name was Alex Jiang, and that he was hilarious. When “Meet Lazy Wolf,” “Fashion Wolf,” and “Sherlock Wolf” were published on September 1, 2014, many people, all over the world, were smiling.

Aaron would later mention in the introduction to Jiang’s first book, The Best of Lazy Wolf 2014-2015, “a simplicity to the humor that feels both obvious and surprising.” And I agree. Some of my favorite moments, the ones that have me on the floor, the ones that make my girlfriend stare at me all strange as I’m hiding my face in the rug because at this point I’m crying, until she, too, reads them, and begins laughing, pretty much crying, seem to occur just after Lazy Wolf is confronted with something that just doesn’t suit him. Something he doesn’t have the time or patience for, so he chooses simply to walk away, or to just say “Nope.” You sort of sit there, satisfied, thinking Man, this kid really knows something.

Alex Jiang’s humor is sharp, fast; he’s an unrealized semantic genius. And when I called his house one Friday night to talk, his responses were well-considered, but to the point. He is laconic, deeply imaginative, thoughtful. His demeanor throughout the conversation was playful, and he has that way, as children sometimes do, of producing better answers than the questions allow for. His playful frankness is not unlike Lazy Wolf who, as Alex admits, he is like, “90% of the time.”

(Fun fact: According to his mother, "He likes putting extra details in his comics. He once said to me, 'I put in the extra details for people who pay attention.'"

Example One - "The building in the background is Burj Khalifa, the tallest man-made structure in the world."

Example Two - "In this comic, Lazy Wolf is holding a letter C, which corresponds to the 'sea' in their conversation."

I think it was six months ago when you submitted the first batch of Lazy Wolf comics to Hobart. They were the first of many to come, and pretty much immediately—I remember because I was the social media guy at the time—people went crazy. “Lazy Wolf is way better than Axe Wolf,” one guy said. And I actually had to look up who Axe Wolf was. Anyway, how did these comics first arrive at Hobart?

My mom is friends with this woman named Georgia, and Georgia knows a lot about art websites and stuff. So she told my mom about it—she said I should send Lazy Wolf to Hobart.

What did you think when they were accepted?

So—Lazy Wolf. Tell me about him—what drives him, what makes him tick. What does he like and/or dislike? Where did he come from?

The top three things about him are (1) he likes to sleep, (2) he likes to eat, and (3) he doesn’t like to work. That’s basically it. He comes from… unknown. He appeared out of nowhere.

Was Lazy Wolf the first character you created where you were just like “Wow, I think I’m on to something,” or were there others before him?

I couldn’t think of a better character than him. I had drawn a few other comics. I wanted something like [an adjective] then [an animal]. So for the adjective I did Lazy, and for the animal I did Wolf.

Oh yeah! I was searching one day on Safari, and I saw it—in Oregon!

Is that the sort of thing Lazy Wolf would dig?

What have you been reading lately?

Elsewhere, by Gabrielle Zevin. It’s kind of like Narnia: It’s a world like Earth, but it’s not Earth—you know, Narnia.

How about comics? Do you have a favorite?

Calvin & Hobbes—that’s the one that inspired me.

Most of your comics, except two at the end of the book, are these hilarious, single scenes. What’s your creative process like?

Well, usually at the beginning I think of, like, a really dumb joke. Then as I draw, I just get more and more ideas. Like in “Wheatballs,” I got inspiration from this joke on TV, and I just made it my own.

How many drafts do you usually go through?

One or two. I don’t go through that many.

One of the comics in the book is called “The First Time Lazy Wolf Eats Pizza.” Do you remember the first time you ever ate pizza?

No. I think, well, the first—no. I don’t remember the first time I ate pizza. In fact, I had pizza today at school for lunch.

Every chance you get, right?

Well not every chance. Maybe every couple chances. [laughs]

In “Tuna Fish Sandwich,” another wolf is standing on a staircase, holding his arm out toward Lazy Wolf while explaining how the food chain works. Eventually, Lazy Wolf cuts him off and says, “What a weird game of Dominoes.” This is my favorite moment in the book; it’s such a neat comparison. And I mean, you draw this comic, begin getting published, and here you are with a brand new book—like a weird game of dominoes, right?

Yeah, well, there is another joke in that comic. It says many things eat tuna and stuff, like sharks and other stuff. And he’s talking about it because Lazy Wolf is eating a tuna fish sandwich!

Is there anything else you’d like readers to know about The Best of Lazy Wolf, Lazy Wolf, or just anything in general? Anything you wish I’d asked?

I don’t think I’m like, interviewer material. I wouldn’t have very good questions.

Order The Best of Lazy Wolf 2014-2015 here. For more information on Alex’s work, visit his website at http://www.alexeveryday.com.

Pat Siebel is the Interviews Editor at Hobart. He lives in Christiansburg, Virginia where he's an MFA candidate at Virginia Tech. Twitter: @patksiebel