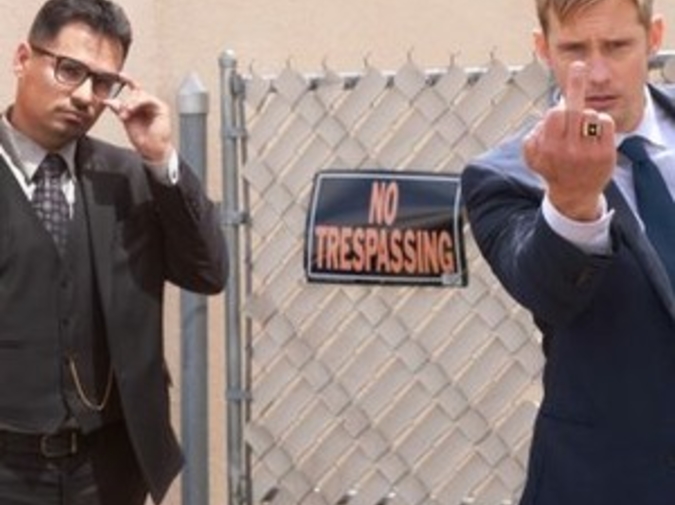 If you want bad hurt in the expansion pack, either McDonagh brother almost always comes through. Might deserve a chop to my shit for cheekily writing the word “almost”, or for jostling both kin into a single unit, but backtrack from its Noé-esque title (he shall survive Love and return to us!) and War on Everyone is, I suspect, the studio’s fault. Commencing with a mime attack doesn’t help (how could Reno 911 be outdone, and Jodorowsky was a mime, let it go with mimes being nifty to pulp on sight, and what if in some drug mania our main Bad Lieutenants revere mimes and stalk them and busk after scared civilians? McDonagh’s in my head: fuck off with your Reno 911 clown defense league, Yankee cunt!), but plot shuffling and abundant note giving feels inflicted over what was one of the best trailers of the year (Triple 9’s promising trailer and subsequent mess proving prescient), directed by an artist sporting a flawless record, and (a finance rub eschewing most risk?) starring big names on the rise. His last film was Oscar nominated, now he’s shirked straight to vid because, unconfirmed shot in the dark, maybe he relieved himself on an exec’s loafers while threatening a family member or two? (There’s a reason I’m a fan.) When a movie endows a scene with quality longer than a minute, it’s a miracle against science, but Seven Psychopaths preserved the mythos peculiar to the other McDonagh, his usual iconoclastic command, and was still passed over. (My loser ass rooted alone in the theater.) Filth also had a lot of hyped talent willing to dirty their hands, yet somehow delivered a product I can’t remember and neither love nor hate. This concern persisted with Kill Your Friends, which, as its tag line reads, is the millennial American Psycho, further proof my generation got born through a catheter. (Heavy drug inundation and you gotta contend with the old school masters who did those hysterical sequences in Fear and Loathing in Los Vegas and Wolf of Wall Street) The best thing about psychopathic art is it is never in fucking favor. That’s the idea! Perhaps stop cutting perfect trailers and focus on every single scene being a perfect trailer. Let’s make some wrong choices about what people will sit through. Take as the modern ideal a fully confirmed masterpiece in the field of fucked that you may be shocked to find has anything to do with the latest Batman. I Killed My Lesbian Wife, Hung Her on a Meat Hook, and Now I Have a Three-Picture Deal at Disney, directed during his distant and wild pre-fame youth, hits every iconic note of fun excess enriching the genre, the delivery being jolting, seminal, and far from slick (the deranged actor who co-wrote it went on to pen Disney pictures, which does a lot for my joyously grainy high school memory (watching on the Atom website ten years before Youtube)). I won’t bother imploring any film of our era to at least attempt to match an ideal like Bring Me the Head of Alfredo Garcia (the coolness of a steadily unhinging Warren Oates, Sam fucking Peckinpah, okay, no one is capable now, it’s okay) or the sublime Little Murders (maybe reboot it with fifty million dollar blue tint cinematography (only the movie Seven and my man Gaspar are allowed to top down CGI camera swoop an exterior)), but let’s snafu a tinge more vicious, folks.