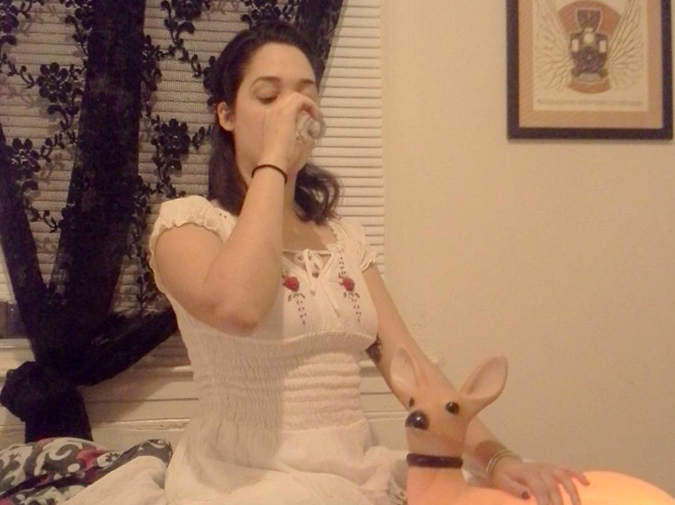 In ancient Greece, it was believed that the uterus moved around inside the female body – like something winged, a finch, moving from perch to perch in its cage. Or like a ghost in a haunted house.

The uterus was moody. Distractable. Like my grandma Bernice, like me, each of us fluttering from one thing to another, never able to settle, never one to be soothed, ever elusive, always skittish.

Several weeks after my friend has a fibroid the size of a grapefruit removed we are traveling in Iceland. We go to Thingvellir National Park and, among other sights to see (a place where two continental plates come together, a lake where artic char have evolved over centuries), we come to a pool in the river where women accused of infanticide were drowned. Viking justice is not interested in nuances, in the subtlety of what might offer a woman the courage to kill her own child. I am.

I’m interested in mercy and mercy killings, and to whom mercy can be extended toward. I am interested in mothers who eat their young, but this is an old story and matriphagy (mother-eating) must also be considered. Children can be ravenous. Women still die during childbirth, even now. It can be said that women die slowly under the expectation of childbirth. It can be said that women die slowly—years in coming—from the repercussions of childbirth.

What a relief it can be to spare a life.

Plato compared the uterus to a living creature, willful and digressing, on its own hero’s journey throughout the female body, establishing a temporary home in the lungs, the heart, the throat. Plato got a lot wrong.

And I can’t stop thinking about Jane Roe.  Did you know that Jane Roe—a.k.a. Norma Leah McCorvey Nelson, the plaintiff in Roe v. Wade—later became a Roman Catholic activist in the pro-life movement?

My friend tells me to say anti-choice instead of pro-life. It’s true that I am pro-choice and that, from another vantage point, my position might also be considered anti-life. I’m not saying semantics are not important. They are important and impactful. They are revealing. At the same time, they are thick walls—brick, scar tissue—that we each stand behind to volley at one another. It seems as though, more often than not, things become a matter of volleying semantics balls at one another’s semantics walls.

My friend woke up in the hospital the morning after having a large fibroid removed. The size of it was the equivalent of her being five months pregnant. Saved the ovaries, she texts. There was no guarantee. During the procedure, her uterus was detached from the saved ovaries, fallopian tubes, etc. and placed inside a bag before being removed. A death of sorts. A birth of sorts, too, if only because the uterus was pulled out through her birth canal: a crowning, sans crying, of something inside coming wholly and purposefully out into the world.

My friend is a womb-less woman, her womb having wandered, accidentally born, and through its own birth defeating the possibility of the birth of any children.

Women, womb-full and possibly filled with woe, have wandered far and wide to rid themselves of the possibility of birthing a particular child. The timing isn’t right. They aren’t right. They don’t want the child, any child. It wasn’t their choice to get pregnant. They changed their mind.

It matters. It doesn’t. It matters. The reasoning behind the decision.

And not long ago, my friend and I sat in a busy restaurant filled with families where children wandered from table to the play kitchen set up in the corner. They cooked pretend meals and served pretend bites to their mothers and fathers. I said to my friend – just the sight of that little girl makes me want one. I know, she said. Me too.

Brigitte Lewis is a writer born in Gold Country destined for speculation. Her work has appeared or is forthcoming in DIAGRAM, The Southampton Review Online, The Spectacle, and The Sonora Review. She is currently at work on a hybrid memoir-in-essays called Speculative Histories. You can find her at brigitteelewis.com.