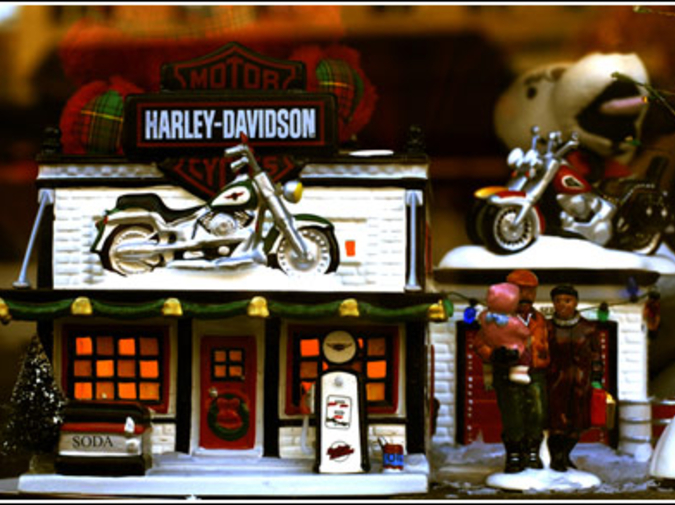 The honeymoon suite in the bed and breakfast had a Harley-Davidson theme. When the brochure said ‘a haven for bikers,’ we assumed Schwinn. Cycling was part of our life – Mason had done the Tour d’Organics twice and I was last year’s Taming the Tetons champion. The wedding cake was shaped like a bicycle wheel. Our relatives sang Bicycle Built for Two as we rode away from the reception on a big-tire tandem with whitewalls. Two people, two wheels, always in motion, always in the same direction, no braking now – those were the kinds of toasts made with the champagne we’d bought in bulk from Sam’s Club the day before.

The house was a steep Victorian painted dark red. Outside were ten Harleys, parked in chorus line alignment. The wall behind the check-in desk was a series of wood cubby holes, each filled with a helmet. From the bar beyond came the sound of deep cackling and back-slapping against leather.

Sonia, the proprietor, led us up to our room in the attic. Mason looked at me and I looked at him. It was right then I thought about how I’d only known him three months. The figure that popped into my head was the real number, eighty-eight days and five hours. Our first kiss took place in an oak grove on a break spot during the Ride for Rabies Cure and I didn’t know his name until he passed me later on Mile Eight and shouted “I’m Mason!” as he went by. My mother spent five hours trying to talk me out of marrying him so soon. Five hours, a bottle of wine, and calamari eggrolls. She’d married at sixteen and knew my dad a total of eight months, altogether.

The room was papered in large scale photos of Harleys, like they were coming towards you. In the middle of the room you thought you could be run over from all sides. There were hat stands, two, each with a helmet, one metallic pink and one blue.

Sonia motioned to them, “You know, some people get into, well,” then a nervous laugh and she looked down at the rug. It was orange and black with the Harley logo in the middle. I tried to remember Mason’s middle name. In our rucksack were our bike helmets. Would we wear our pointy cycling helmets to bed with nothing else and have sex, as Sonia implied, just a different version? Mason’s Jeep out front had our bikes on the roof and shaving cream on the side windows, wishing us well. Tomorrow we planned a ride to Loessing Bay. I imagined our thin bikes parked next to the beefy hogs outside.

Sonia opened the bathroom door. The toilet flusher and the faucets were handlebar grips. I’d never even seen Mason pee. I was in my forties but I felt like the virgin who marries right out of high school and puts on a sexy nightgown in the bathroom, hoping for the best.

Martha Clarkson is a fiction writer and poet originally from Oregon, now receiving mail in Kirkland, Wa. Her work can be found in Pindeldyboz, monkeybicycle, Seattle Review, the Fall 2006 Nimrod and many other publications. She rides neither Harley nor bicycle, but a dragon-red Vespa.