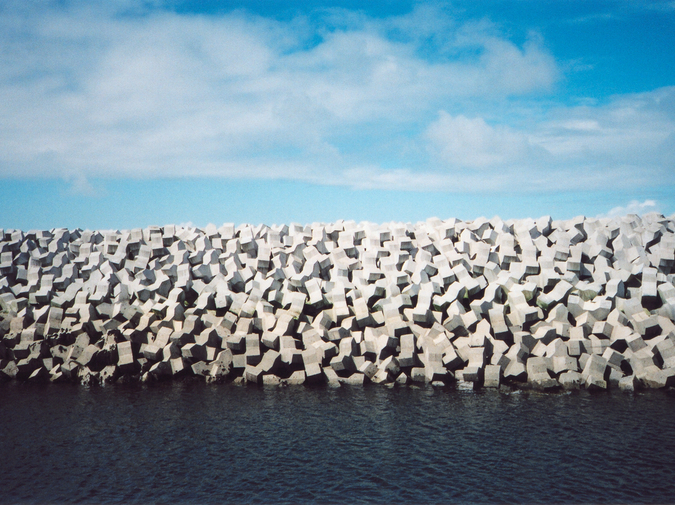 I’d pony up the midnight sun for a pulled pork sandwich. That’s how Uncle Bart implied he longed to move south. King ignored the big-boned statements, afraid to dig too far into Uncle Bart’s plans and strike ground water. If Uncle Bart up and lugged his whole snail shell 1,000 miles south toward Alabama, King figured he’d be the last to know.

The arrangement with Uncle Bart was only temporary while King’s mother situated herself in Thunder Bay, the hometown she had dropkicked eleven years ago after tangling with King’s father. Uncle Bart was not related to King by blood. Uncle Bart had no siblings at all. There were no photographs in the houseboat to prove otherwise, and he spoke of his childhood in dingy, knotted strips.

We had a dog named, Jackson. No wait, Melody was her name. Got shot once. Just below her ass. Limped like a whore.

Caught my first fish when I was three. Three years old. Hoo-ee.

I like pink. Always have. It’s those damn corporations who’ve turned it sissy.

Down by the river, we covered ourselves in mud, warrior paint. Probably looked a little like you. Heh.

If I’d known your mother when we were little, I’da snipped her pigtails off and slipped ‘em in her schoolbag.

It was his mother’s old date book from 2012 that King stashed in the orange crate Uncle Bart offered up as a drawer. Uneven cursive, some red, some blue, marked the days in messy code, his name sketched as a small crown scoring the bottom of the Friday squares, even though Friday was no particular day.

The houseboat was compact, and King felt naked, a thrift store trinket on display. He curled against one pilled arm of the sofa, scrunching himself into a brown egg. He stacked his schoolbooks on the floor, building the ruins of a fortress around him.

Lately, Uncle Bart had waxed on about the southern sun. He spoke of the long, Michigan winters freezing hard the cash and icing up his loins. He tossed around the names of humid-sounding towns like Smyrna, Tennessee, Tuscaloosa, Alabama, and Moultrie, Georgia. Uncle Bart never said he planned to go alone, but the ice from up north crept closer, and King could hear the deep freeze like a yeoman’s whistle shaving the birch bark in a perfect curl.

It had been more than a month since King’s mother last sent word by post, and it was a month before that when she’d last phoned. Except for the occasional windy day, the houseboat remained steady on Lake Missaukee, and it was easy to forget he was living on water except at dusk when the loon called. Uncle Bart with his tallboys denting in his grip would grin as though the loon were imparting a secret, and on the nights when Uncle Bart stayed away till morning, King imagined him painting his neck black, flapping in the brush that gathered in rough inlets along the lakeshore. On the other nights, the ones when Uncle Bart came home with women who outlined their eyes, the loon call would spring from the bedroom wall in bursts and water would lap across the deck. In the mornings, with Uncle Bart roped in his sheets, King poured Frosted Flakes for himself and for the bird ladies who were embarrassed and curious and starving at the same time.

What am I, boy? I am a woman from warmer waters, she said.

I’m a fool who chased a man who talked to God, she said. She said, Your hair would look like mine if you let it grow.

She plunged her fist into the cereal box without a sound, and retrieved a nest of flakes. And King, he slurped the sugared milk from his bowl.

No, said the bird woman. I do not love Uncle Bart. What I love is not being me.

Like when I play the clarinet in band, King said.

When October dropped in, the fall winds jostled the boat in the late afternoons, and nervous for his future, King asked Uncle Bart about his anchoring technique.

You and the government telling me I gotta get a Danforth?

I’ll stake the center before the first freeze. What do you care?

I didn’t buy this houseboat to moor myself in place.

How about tomorrow you swim underneath this old girl and grip the rudders till I tell you to come up.

King believed his mother would collect him before Christmas, a Monday in 2012 but not a Monday this year. Until then, he would keep a stock of sugar cereal and whole milk, and perched on the weathered deck of the houseboat, he would watch the loon fish in the still lake, plunging a black neck into glass without a sound.

In the morning, with Uncle Bart drooling on the sofa, King lumped his textbooks into a pillowcase the color of his mother’s stomach and placed his small hands over the wrist of his favorite bird lady. At the cramped kitchen counter he whispered his questions with his chin tucked in:

What did she hear across the lake?

Will she go to it?

If she ever set sail, would she cradle the anchor and kiss it goodnight?

Rosie Forrest is a writer out of Nashville, Tennessee. Recent publications include Wigleaf, Word Riot, SmokeLong, Whiskey Island, and the 2015 fiction prize for Dogwood. She's the winner of the 9th Annual Rose Metal Press Short Short Chapbook Contest for her collection Ghost Box Evolution in Cadillac, Michigan available this August. More can be found at rosieforrest.com