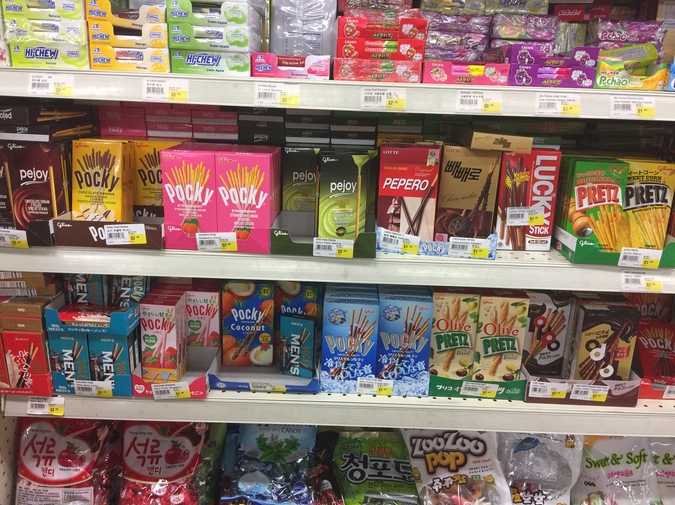 Transpacific Passage through my Hungers

I wake up famished
after dreaming of my Halmuni.
Her sturdy hands spooning galbijjim
into wooden bowls. At first light, I Godzilla
Google maps for every Korean restaurant
across Brooklyn: Kimchi fries. Bulgogi sliders.
Not your grandma's kitchen magic. Out fifty dollars
and still hungry. Always some price to pay
for half-assed passage. Who has known
a gratification so meager. I had meant to write
a poem on hunger but instead I go to the market,
carry the harvest back, direct my clumsy hands
to mince ginger, pit jujubes. There is no pre-made broth
for what eats away at me. The pot on the stove
humbles me. Makes me wait. I make it
in the quiet of my kitchen from scratch.
Away from coworkers boasting
consumptive excellence of BTS. Away
from wary roommates. Hungry husbands.
One ocean and two continents away
from my mother. I shell chestnuts holding her
in memory, the time we disembarked
the Megabus at the corner of W 27th and 7th
into an inhospitable corridor of cold
the smell of chestnut carts making
her salivate for past warmths: a girl
zigzagging wintered side alleys of Seoul
picking up a paper cone of roasted chestnuts
to keep her mittened hands warm
the long way home. I ladle broth into the bowl
dip my spoon into the hunger that bore me
till scraping bottom, a shell
of my longing. Hearts pitted
of a place we are not.

On the eve of my beloved's birthday
I cut long strips of construction paper
into a garland of rings: red, yellow,
blue & pink—pink of Pepto, calamine

and birthday crowns of a former
four-year-old self: a marvel
of architecture circling my head
like a slatted lantern lit aglow

with glitter fashioned by my father
before he knew manacles
of rusted pipes and barbed bosses.
In middle school my brother

came home with an assignment
to build a 3D house out of paper.
Nights after work, my father
lit up the garage to build

a palace blue tiles and balustrades
from the Joseon dynasty fashioned
from corrugated cardboard. Our teachers
were bewildered by our projects

how quiet children would nerve
such grandeur. I never thought
of my father as an extravagant man
but sitting at the center of all this color

and confetti three decades later
I know different. My hands slow
all this making, baking and cutting
in memory of the epoch my father

was coming of age, when bread
was not baked for adoration
and flowers were pressed
in secret between the thin onion skin

of book pages. At the blue hour
I set down my scissors and follow
garlands of lit lanterns guiding me
through a garage of rusty pipes

to the foot of my father's palace
glimpsing silhouettes through windows
of tiny extravagances held between
those old familiar hands, unbound

Susan Moon is a Korean-American poet who writes at the intersections of language, art and mythology. Her work has appeared in Gianthology, The Shore and Lammergeier. Her coordinates for home fall between the US, China and Korea, and she currently resides in Brooklyn.