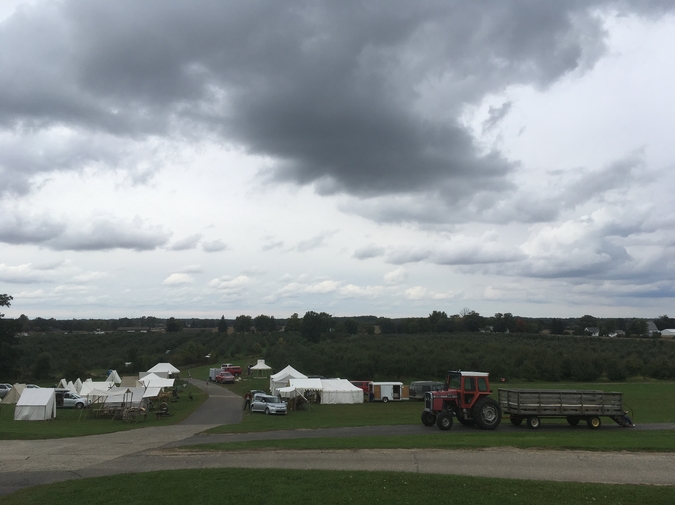 We argue about whether we should be more frightened

of ghosts grounded, or ghosts
who take to the sky,

whether we're convinced hauntings even exist. We argue
over the proper name for a spirit. How to greet them

if they appear. We argue over the weight, texture,
and taste of them were they to wash over us,

pass through us, or enter us
and form words in our mouths,

our flesh a shell slipped over the haze
of them, our spirit dissolved in turn.

I tried to lose myself once, said Colin. Left the farm

drove until I ended up in Worms at a bar
called Nightcrawlers. I asked the bartender
how many people lived there. He looked me over
for a while. Well, that all depends, he told me.
What’s your drink? I told him a Bud was fine.
He poured it for me, watched me take a sip,
then replaced a 36 on a chalkboard behind the bar
with 37. Looks like 37, he said.

I didn’t move from that bar for six days,
just slept in a booth, and washed up
in a bathroom in back. He called me by my drink.
Sometimes the bar was crowded, and sometimes
I was alone. Sunday, the bartender called me
up to the bar and said, can’t stay here tonight.
We’re closed on Mondays. He seemed sad
to have to say it. At midnight, he shut the door,
and for the first time in almost a week, I stood outside.
I looked through the window on the door,
and saw the bartender reach up with a damp rag
to remove the 7 from the chalkboard and replace it
with a 6. I’d never felt more rejected.

So I drove again, down dirt roads, through tunnels
of corn, and eventually found myself back at the farm.
No one had even wondered where I’d been.
Looking doesn't help. Things get lost.
People, though, tend to find themselves out here.

These poems are from After the Floating Barn, written by Josh Gaines and Ben Clark over a month-long residency at Art Farm Nebraska.

Josh Gaines ditched a promising military career to write books, run a profitless press, and build blanket forts with his daughter. He earned his writing MFA from The School of the Art Institute of Chicago and has had fiction published in Two Cities Review, the Viable series from Zoetic Press, Nebula Rift, and in London's, Dark Mountain. As the founder and Captain of Thoughtcrime Press, Josh edited Not My President: the Anthology of Dissent and sent copies to every member of Congress. His poetry appears in numerous anthologies and journals, as well as in his own books of poetry and flash fiction: Cigarette Sonatas, and little bones.

Ben Clark grew up in Nebraska and now lives in Chicago, where he works as an editor for Muzzle Magazine and Thoughtcrime Press. He has two collections of poetry: if you turn around I will turn around (2015) and Reasons to Leave the Slaughter (2011).