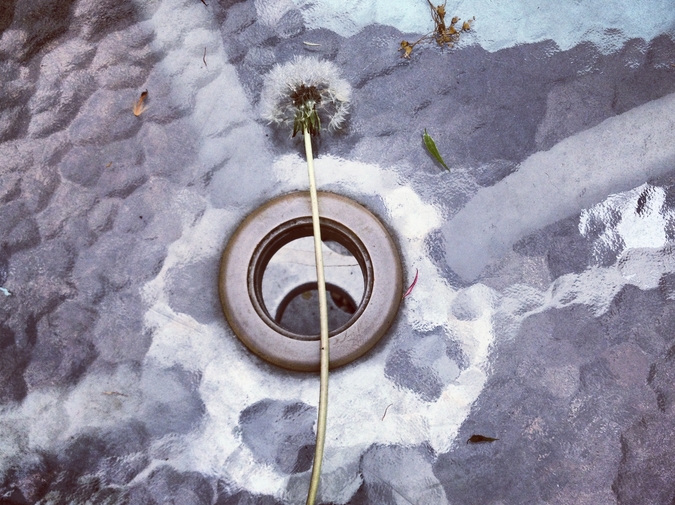 
She takes note of the broken shards
created by her own hand. The wedding

china, the gilded mirror, the cloisonné lamp
she thinks, are so much

like small acts of betrayal, gleaming
hatreds collected over the course of a lifetime.

If only she'd thought to smash, earlier,
the infinitive to destroy never occurred

to her, never in this careful home of her planning.
And now this palsied rage rests unfamiliar

in her bleeding palms. In this room's arrangement
smash vibrates in a language she cannot

understand. She must set fire to the pictures,
destroy them at the very least because

while they were still eating.
A feast of love? Or was it a habit

of hunger? An invisible knife
rests in the crook of her arm.

for their dinner: drained of all its blood, not dead
yet. Staggering like a drunk.

They ate the rude jewels, medallions
of its flesh without a word, without hesitation.

“Like sharks?” She jokes
because she knows what a blood-

bruise piece of history they swim through
in this rain, in this city where he negotiates a nautilus

route, chamber after chamber collapsing behind them
as he talks about how X broke his heart,

as he shoves his palms into his pockets—
he does not know she can read those lines:

those creases sing his mother's name,
the bloodied nose of the drunk he beat

unrecognizable, the dozens of nights cradled
in the blacked-out hold of slight, tattooed arms

he used to wrap around himself to keep
from freezing, to keep himself from floating away.

“The cherry trees on this street keep dying.”
Boom, boom, boom. He shoots down the row

of this treelined street with fingertip
bullets and bullets of exhausted breath.

Michelle Peñaloza grew up in Nashville, Tennessee and holds an M.F.A. from the University of Oregon. Her poetry has appeared most recently inTriQuarterly, The Weekly Rumpus, and INCH. She is the recipient of the Miriam McFall Starlin Award from the University of Oregon, fellowships from the Richard Hugo House, Kundiman, and Oregon Literary Arts as well as scholarships from the Vermont Studio Center, the Napa Valley Writers' Conference, and the Bread Loaf Writers' Conference. She currently lives in Seattle, where she is hard at work on her latest project, landscape / heartbreak.