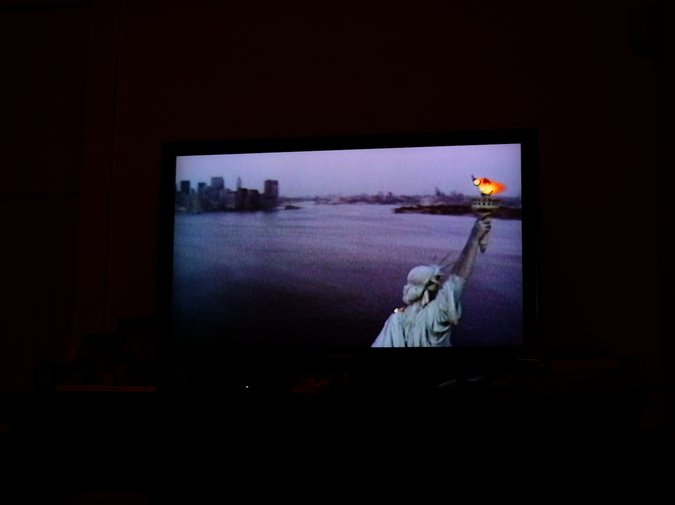 Estie had a horrible track record with dating. There was the guy who picked her phone up from the table and read her texts on their first date, the guy whose nose both looked and sounded like Jerry Seinfeld's nose, and the guy who had an anxiety attack waiting on her doorstep, then lay down on her bed and had a three-hour nap. And that was just the past week.

"But really," she was telling her roommate Leila, "I don't need to worry about having a track record at all. Every single person has a zero percent success rate until they get a one hundred percent rate. Why should I get all mopey and mournful at all? At least I'm narrowing down the pool of prospectives."

Leila was not paying attention. To Estie, at least. Leila was getting ready for one of her own dates, painting her nails with miniature renditions of each of the Ten Plagues. She was a meticulous type. She was also really into astrology, Jewish astrology. She identified a lot with Passover. It was nowhere near Passover time, but Passover was when she was born, and she really wanted to drive the point home.

"So what are you doing tonight, Estie?" said Leila, swiping the last detail onto a tiny swarm of locusts.

The two girls went out that night, one in Brooklyn and one in Manhattan, one to a hotel lobby, one to the boardwalk. Their dates were an aspiring wedding singer and a schoolteacher. They both arrived home well past midnight, toward the crowning of dawn; one had found love and one found a long, stifling conversation about acceptably kosher backing music.

Estie threw herself back onto her bedspread, exuberant. "I can't believe it," she said. "One right date is all it took."

"I can't believe he didn't like my nails," said Leila. "I did them just for him."

"He didn't notice?" Estie said, trying to be charitable.

"He thought that I was a goth," Leila erupted, and burst into tears.

A week later, Estie found out that the schoolteacher was actually a mortgage broker; he'd lied to appear less boring. Meanwhile, Leila had gone on another date with a Syrian who was an aspiring kabbalist. Estie said it was doomed from the start. But Leila came back charmed, saw him again, saw him again and again, and soon enough she was engaged.

At Leila's wedding, Estie drowned her sadness into the only alcoholic drink on the women's side, a Mazel Tov Cocktail. It tasted faintly of cherries, strongly of cough syrup, and not at all of alcohol. Leila had seated her (charitably? strategically?) near the mechitza, and when Estie gagged on the candied cherry and clattered to the floor, an aspiring EMT named Yoily crashed through the barrier, administered a quick Heimlich, and though afterward people would talk -- was it staged? was it taking advantage of the sick? -- Yoily asked Estie out, Estie said yes, and the two became a couple.

A year later, Estie came to visit Leila in Queens. The baby had just been put down for a nap, and throughout their conversation there was the muffled sound through the wall of a very tiny elephant crying.

"I keep thinking you were right," Leila told her over tea. "What if you're batting zero until you bat a hundred? What if I was totally wrong, and I was successful when I should have just failed?"

"What are you talking about?" said Estie. She was unfocused. Her mind was on Yoily, who the night before had asked Estie to marry him. She had already decided she was going to say yes. She had put him off twice already, one time breaking up with him and the next saying she simply needed to think. Now she was tired: tired of dreaming, tired of prolonging the inevitable.

"I'm happy," Estie was saying. "I keep telling myself that I'm happy. I have everything I've ever wanted. But it doesn't make me happy. And it's not Samir's fault -- he's perfect -- and I love my son, I do, but I barely notice he's there. He's crying and crying and I just think, who is that? Is it someone else's baby? Who am I? I need to get out of here. G-d, I need to just run."

Yes, Estie decided, she would marry. They were practically already married: the endless dates, the easy and familiar way they had with each other. Love had imprisoned her, this sad and wicked idea that everything would suddenly become one hundred percent perfect. Marriage could not, would not be an end to her dreams, but a simple tool that allowed her to get to perfect. Good enough would be enough for her. All she ever wanted was good.

Matthue Roth’s work has appeared in Ploughshares and Tin House. He wrote the novel Rules of My Best Friend's Body, and his picture book My First Kafka was called "eerie and imaginative" by the New Yorker. By day, he's a writer at Google. He lives in Brooklyn and keeps a secret diary at matthue.com.