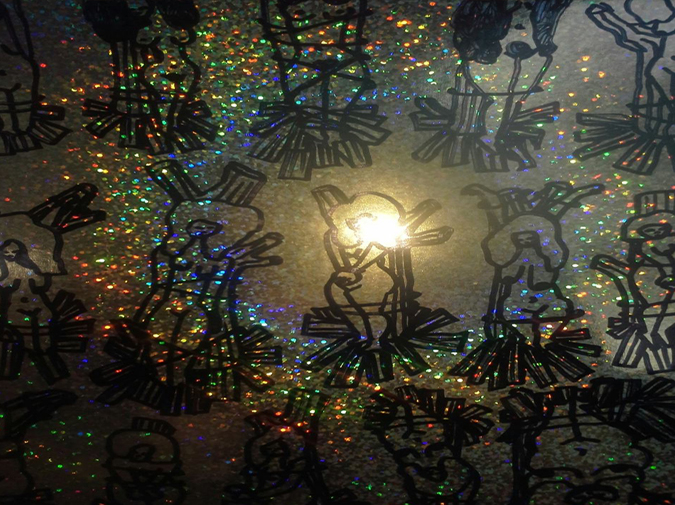 We examined the flakey stain on the corner of the duvet. Since we arrived to the Airbnb house first, I convinced my girlfriend it would help her sleep better if we snagged the biggest room. She almost said yes until she saw the stain.

I rolled over, and she said, “Are you mad or something?”

“It’s going to be a long night,” she said. “I just thought we were going to take a little nap.”

She angled her face towards mine, grinning sheepishly, and she reached between my legs, stroking me. Then she anchored over my hips, guiding my cock inside of her.

We were an hour east of Portland, in Hood River. Everyone else arrived after dinner, five of us, and no one was shy about tomorrow’s wedding. We were the second wave of invitations—the pity party. Was anyone’s name even spelled right on the cards?

After a few vodkas, Maurice said that Avery brought a special treat, and the waffle maker at the Airbnb was as good as any sink in a public bathroom to snort lines.

“Lick the edge of the card,” Maurice said, holding a black credit card to my lips.

Zee edge, he really said, like a cartoon, and I loved everything about him: his tight denim shorts, his black-rimmed glasses, and his wife Avery. Who could ever cheat on her? I thought, as I dragged my tongue like a dog across the plastic.

The first time was an hour later. She stood in the corner of the living room, her porcelain back to us as she shimmied into dress after dress. Maurice scrolled through pictures on his iPhone and Hazel was half-asleep on the couch, hugging her knees to her chest, but Ronni and I were watching Avery.

“I’m so stressed about this,” Avery said, and she let her bra fall loose to the floor. She wore only a baby blue thong. But I couldn’t enjoy anything because she was still complaining about the invitations. “I don’t know. They probably just invited whoever would show up.”

But the truth was, we’d been friends with the bride and groom for two years, and they were going to be 40-year-old newlyweds. They waited long enough, I thought.

Maurice suggested a pick me up and cut five more lines. Our friend, Ronni, was in town from London. She produced a tiny glass straw from her purse.

“My roommate thinks I’m addicted,” Ronni said, straw to her nose. “But I just like the way it smells.”

Maurice recorded the scene on his iPhone.

“We should play charades,” Ronni said.

The first word was “Dragon Fruit,” and Avery and I shouted out descriptions for Hazel.

I said, “A mythical beast that breathes fire.”

Avery said, “The opposite of a vegetable.”

Hazel shook her head, but then her eyes lit up. “Serrano pepper,” she said.

I had to wait another hour to see Avery naked again.

Hazel had retired to our room, and Ronni was jet-lagged and asleep on the love seat. The rest of us soaked in the hot tub on the deck. I was the only one wearing a bathing suit. Avery finally said she was pickled, and I turned politely away as she stepped from the water, wrapping a towel around her waist, and when I looked again she caught my eye, pausing too long before patting her bare chest dry and covering her breasts.

For a year and a half I’ve been trying to convince Hazel I’d marry her so she’d love me, but now nuptials were the furthest thing from my mind.

That night I had a dream about sucking my own cock. Hazel rubbed my back, encouraging me, as I gracefully tucked forward like a mother bird about to feed a chick, and I took the swollen glans into my mouth, circling the corona with my tongue. I didn’t notice that we were in a public park until I felt a crowd of people closing upon us. I spotted a co-worker among them, and I stopped, ashamed and embarrassed.

“There, there,” Hazel said. “It’s what you’ve always wanted.”

The morning of the wedding, I woke thirstier than I’ve ever felt. I thought about my dream. I knew I was going to marry Hazel someday, but I had no idea what would happen after that. I reached for the glass of water on the nightstand; the night-old water tasted like semen.

While everyone got ready, I returned to the Jacuzzi. Dead insects floated in the still water. I only planned to cover the tub, but I turned on the jets and the bubbles broke against the surface like boiling water and the dead insects bounced in the surf. I stripped naked and sat among them. They all boogied as if they returned to life for one final celebration. We all deserved that chance. Jesus, they danced.

Craig Buchner’s writing has appeared or is forthcoming in Tin House, Chicago Quarterly Review, Baltimore Review, Puerto del Sol, and the Cincinnati Review, among others. In 2006, his work won the AWP Intro Journals Award for Fiction. Craig grew up in rural upstate New York before completing his MFA in Creative Writing from the University of Idaho. After teaching for a decade as an adjunct instructor in the United States, Craig moved to Tokyo, Japan, where he currently lives. He spends too much time riding crowded subway trains and not enough time on his unfinished novel and collection of poetry. To read more of his published work, please visit his website at www.craigbuchner.com.