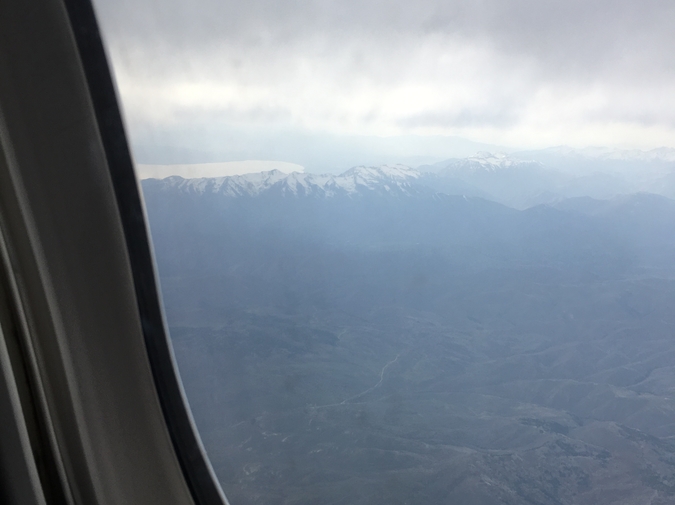 Scientists have observed epigenetic memories handed down
fourteen generations in worms, and I know this because I’m awake
at 2 a.m. in our room in Salt Lake City and Joy Harjo just shared it
on Facebook. Before bed I ate half of a bag of chocolate
-covered pretzels and now my stomach and mind are twisted.
Tomorrow, Mara will go to her neonatology conference while I write;
yesterday I ran five miles in the hills around the U of U
and then had an hour long panic attack about how bad I felt
and the phrase “altitude sickness”. I took one of the two Klonopins
left in the prescription, so if I take the other one now that’s it,
and I still have the plane ride home. In 1644 John Weston,
age thirteen or sixteen, depending on the source, stowed away,
leaving civil war-torn England for Salem Massachusetts. He lived
to either age eighty-seven or ninety, saw witch trials,
owned ships, fought in King Philip’s War. So much potential
for trauma and resilience, suffering and sleep, work, self-pity, and joy.
I’ve been up an hour and a half and just woke Mara
for the umpteenth time, pressing the voice-to-text mic by mistake.
Meaning only to thumb the ‘and’ between ‘self-pity’ and ‘joy’,
my phone chimed like a front desk bell. That digital line
that wavers with the volume of one’s voice flew up out of nowhere
and then went flat in the all-but-silence. Our bodies are tablets, inscribed
upon, open to more inscription. I’ve never stowed myself away
anywhere. I see a boy in the dark amid coils of old rope
knifing blind graffiti into a rat-gnawed beam: scores for days, a cross,
my initials. But he probably waited an hour to show himself
and then got put to work. Annie, you cried in school today;
Theo, you got four hits. I’m on the plane with how the crash will shape
your lives, with how your presence will parse my fall —
the only thing I know worth passing on.