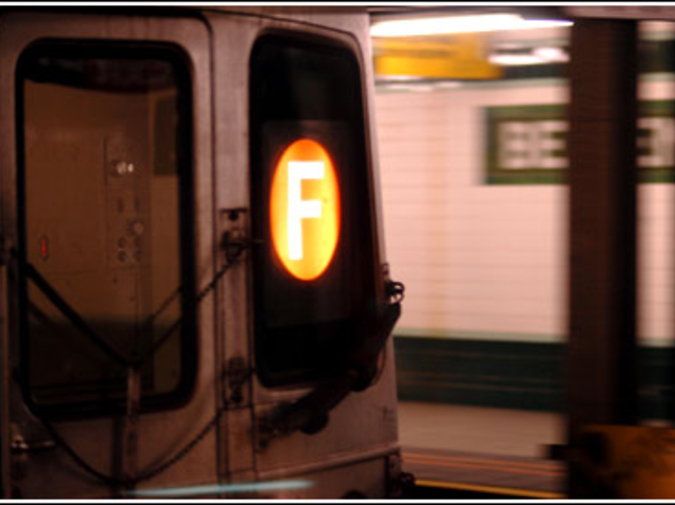 Dina stood on the edge of the platform. She liked to feel the rush of the subway as it roared past. It was midnight. She was coming from a movie about a woman who liked to photograph strangers. Before leaving the apartment, she had secured a note for her sister, Alicia, to the refrigerator door with a Statue of Liberty magnet, the pointed flame of the torch a pale yellow, the crown tilted. Out for the night, she had written on a white square of paper, although she now wondered if she should have been more specific.

Passengers were scattered across the platform: a trio of teenagers in leather jackets and ripped jeans, a tall woman carrying a canvas bag filled groceries, an elderly couple with sagging faces and curved spines sitting on a bench. On the far end, a dark-haired girl swayed to the music coming through her headphones. She wore slim jeans, black boots, and a red jacket with zippers up the front and along the sides of the arms.

Dina had been living in New York City for a month. After the doctors gave her a clean bill of health—as though her problems could be measured like cholesterol or blood cells—and she was discharged, she moved into Alicia’s two-bedroom apartment in Chelsea, just until she got “re-acclimated.” Her sister was an interior designer. She kept clear plastic boxes filled with fabric swatches and paint samples stacked in the living room. Sometimes Dina sat on the floor and felt the different textures and studied the colors, trying to differentiate between Rivera Terrace and Snowy Egret.

The girl with the headphones was smoking now. Dina was pretty sure smoking wasn’t allowed down here, but no one objected. She watched the girl take long drags, holding the smoke in her chest for a few seconds before exhaling.

An announcement echoed throughout the station, the voice slightly garbled: Please take a moment to look around for suspicious behavior. We rely on you to keep our transit systems safe.

Then we’re all just fucked, Dina thought, amused by notion of asking people to watch for suspicious behavior in a New York subway at midnight. Still, everyone, even the teenagers, obediently gazed up and down the platform. The girl with the headphones put out her cigarette.

The London underground had been blown apart less than a week ago. After the attack, Alicia announced, while stirring a pot of spaghetti sauce, that she wasn’t going to ride the subway until “the world got sane again.” But the subway—the noise of it, the dull, flickering lights that shone on the platform, the empty tracks, which reminded Dina of giant veins—was her favorite thing about the city. Danger of that sort didn’t penetrate her the way, she imagined, it did a regular person. It was the abstract threats that took hold: the unshakable feeling that the world was, ever so surely, pulling her under the tide.

She heard a low hum in the distance; she looked down the tunnel and saw headlights staring back at her like giant eyes. The noise grew, filling her ears and chest. The blast of cool air blew her hair back; strands got stuck in her mouth. Tonight she believed the machine was alive and hungry and powerful. The subway stopped and the doors opened: a calling.

Laura van den Berg lives in Boston and attends the MFA program at Emerson College, where she is the editor-in-chief of Redivider and a Ploughshares staff member. Her fiction has been published or is forthcoming in Northwest Review, Third Coast, The Greensboro Review, The Indiana Review, The Literary Review, StoryQuarterly, American Short Fiction, and elsewhere. A story from her collection in progress recently won 3rd place in Glimmer Train's Short Story Award for New Writers.