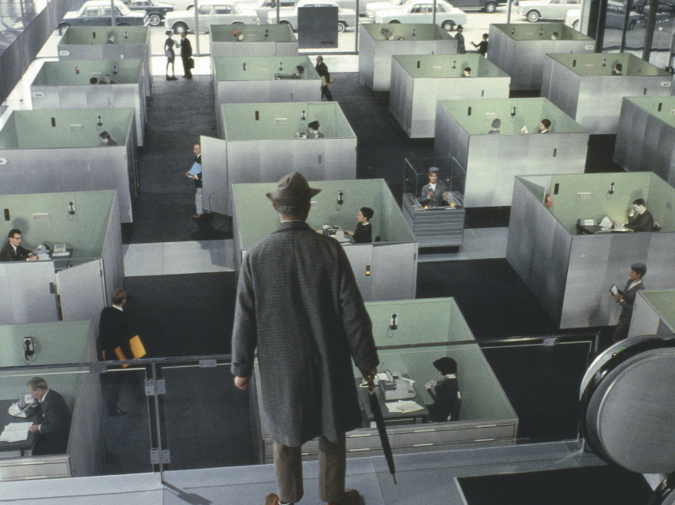 I bought a toilet seat from a store a twenty-minute walk plus a twenty-minute bus ride away from my toilet. The box it was packaged in barely fit the plastic bag the cashier had placed it in, so I had to hold the bag only by the handle on one side. When I held it that way, the bag and box hung at an angle. With every step I took, the box hit my hip and when I switched sides it hit my thigh. This quickly became irritating, but I needed a seat for my toilet, so I initially ignored it. I walked like this for a couple of minutes, switching from hip to thigh, then tried holding the box on its side, by palming it underneath my armpit. I thought holding it like this would be less irritating. But the sharp edge of the box started rubbing up against my armpit and became equally irritating. I put the bag down and looked around for a bin, which I found a few meters ahead of me. I took the seat out of the box. Put the box into the bin. Then the seat back in the bag. Without the box, I could hold the bag by both handles with one hand.

I walked like this to the bus stop, and when I looked at other people, I felt confident, and my hip, thigh, and pit felt fine.

At the bus stop, I put the bag down by the bench and lit a cigarette. When the bus arrived, I picked the bag up with ease, entered the bus, and placed it on the seat next to me.

At home, I put the bag down by my toilet. I looked at the toilet and it looked dirty. I thought "I should clean it before installing the new seat." Underneath the sink, I had a box with bleach and a sponge in it. I used a couple of drops of bleach on the sponge to clean the toilet. I rimmed the edges of the bowl with the sponge and scrubbed down the sides and tank. The sponge quickly turned from a light yellow to a dark brown, so I thought, I should throw it away. I put the sponge in the toilet bin which was already almost full, and the sponge prevented the lid from closing completely. I thought, "I should change the bin bag before installing the seat." I wanted everything to be clean so the seat wouldn’t get dirty. I took the full bag out. Tied it with a simple knot. Left it by the side. Then put the toilet seat bag in the bin.

The next morning, in bed, I woke up on my stomach. My stomach felt uneasy. I walked up to the toilet and stood in front of it. Pulled both the lid section of the seat and the actual seat up, and tried to prop them on the toilet tank. The seat held still for a second, then fell off. I lit a cigarette. I picked the seat up, left the toilet, and took the seat to a DIY shop a five-minute walk from my flat. I stomped on my cigarette before entering.

When I entered the shop, the cashier looked at me like someone holding a toilet seat. I walked up to the counter, with the seat under my arm, and asked the cashier if they had the screws required to screw a toilet seat onto a toilet, “the kind that is long so they can pass through those holes on the back of the toilet bowl.” The cashier replied, “We have screws like that but not the bolts.” I said, “what bolts?” They explained that toilet seat screws have special bolts made of plastic that are wide enough to hold onto the toilet seat screw holes, “and are ergonomically shaped so you can screw them on with your hands.” I looked at the cashier without saying anything and the cashier interrupted me to ask, “why don’t you go to the shop you bought it from?” But I didn’t want to go back to the other shop, it was too far. I thought there must be a local solution. I said, “can you give me normal bolts and wide washers?” My thought was that the wide washers would be wide enough to not pass through the holes, and screwing the bolts and washers on with a wrench would be easier than spending the forty minutes there and forty minutes back it would take to go to the other shop. The cashier said, “sure, but I don’t think that will work,” then took two screws, two bolts, and two washers that seemed only medium-sized out of a display of small drawers, and put them all on the counter.

I bowed. I knelt next to the toilet bowl and bowed my head under it. I couldn’t see a thing. I grabbed for my phone from my pocket, turned the flash on, flashed it at the hole, and finally saw the screw hole. I screwed the screw into it, then repeated on the other side with the other screw. Then I tightened both screws up to the toilet holes with my hands. They felt tight but not secure. I thought, “I better try it out before getting the wrench,” since it wouldn’t make a difference how tight the washers were screwed on if they could just slip through the holes. I got up and propped the seat on the tank. The seat held for a second and then kept holding. I felt relieved. I thought, “I’ve done it.”

Then the left side washer slid through the hole and the whole thing came undone. I held the toilet seat in the air. I thought about smashing the seat on the sink. I lit a cigarette instead, put the toilet seat on the toilet, and google searched “plumbing shop.” The closest plumbing shop I found was a forty-minute walk, or ten-minute bus plus fifteen-minute walk, or fifteen-minute taxi away from my flat. I checked my bank balance, and decided on the bus and walk.

When I got off the bus, I immediately felt a sense of regret. I regretted not bringing a bag to put the toilet seat in. I looked around at all the people not holding toilet seats with stains under their arms and felt envious. I briefly thought I should just bin the seat and buy a new one: go home, get a big bag, take a twenty-minute taxi to the shop, buy the exact same seat, tell the cashier I brought my own bag and don’t need theirs, place the box in the bag, grab both handles with one hand, and walk all the way home confidently and with ease. I didn’t care if it took an hour. But I thought back to my balance and the seat’s price, and by then I was stood in front of the third shop.

Aristotelis Nikolas Mochloulis was born in London and grew up in Nicosia. He was part of the artist group Incest School and showed work at Thkio Pallies. He now writes and lives in Athens.