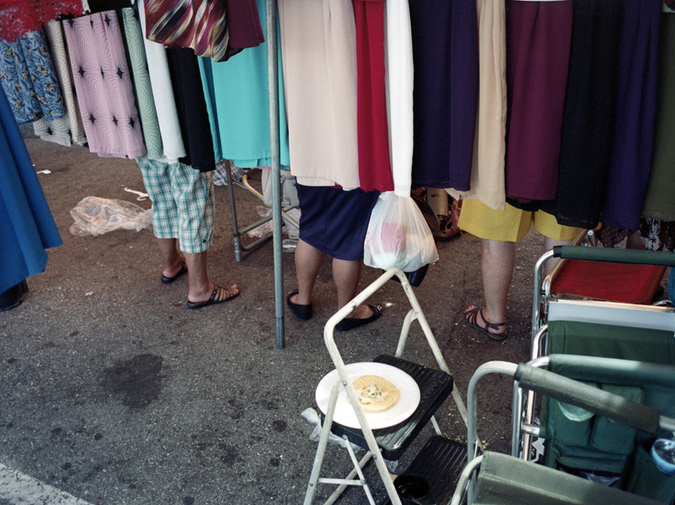 Fact: I am currently without a toenail on the pinky toe of my right foot.

Why: I pried it out of my toe, whole, with my own fingers.

I’m not going to answer your next question.

The nails on my pinky toes are just nubbins, really — sort of shapeless blobs of keratin that grow in a little pit at the end of each toe. If you look closely, you can almost make out the typical flat shape, only it isn’t parallel to the toe like normal — it’s closer to perpendicular. They can’t be clipped, and so every couple of months, when they get long, they start to wiggle in their little sockets. I worry the thing enough that it starts to peel up at the edge like carpet coming untacked, and then after an hour or so, I’ve managed to dig it out completely.

I’ve never been in love. I loved my cousin who wasn’t really my cousin, watched her run through grass in a dress that the buffeting wind drew drumtight against her, embossing the dieresis and haček of her newly developing body into the material. I loved the sweet rotting odor of a puppy dying from a virulent cancer far too early. I loved the sunlight descending through the trees like globs of melting butter roiling across the day. Jazz, all that.

My cousin who wasn’t really my cousin was two years older than me. When you’re young, age feels like a race. Kids just a few years older than you are always winning, and they seem to know it. It seemed unfair that she was older than me, because if I could just get a burst of speed and sprint up level with her, she might be able to see me in something resembling the way I saw her. Everything that wasn’t quite right in my life because I was too young appeared perfectly ordered and set in hers. I remember her telling me, at the beginning of a school year, about her new classes. She had one teacher for every class. To have one teacher for every class — that was just about as grown-up as I could imagine. She might as well have been telling me the terms of her mortgage.

And then finally I had one teacher for every class and yet somehow I felt just as young as before. I had so many books I carried a backpack around all day. Now she had papers to write. A physical form more important than the content itself. Same thing happened there, though. I still didn’t feel like any less of a kid. It’s been the same story ever since.

There are certain words that reek of sophistication and maturity until you finally take ownership of them and feel like a usurper, because if these things don’t grant adulthood, then what does? Then suddenly there are no more milestones left, and it’s like you’ve just walked into a church from a busy street and you’re still shouting to be heard over the din of the traffic and your voice just sails out into the silence, unfettered.

My cousin who wasn’t really my cousin stopped coming around when I was in high school. I don’t know why. All I know is that before she graduated, she fell outside at a pool party and a nail gouged her thigh and she got blood poisoning and died. But I found all that out years later, long after I had stopped loving her or even thinking about her at all.

I wonder if a Martian, if asked to arrange things into groups that share the same name, like people’s different toenails, would lump all the toenails in the world together or if some would just seem too strange and different, such outliers as to be seen by an impartial, toenail-less observer as somehow separate. It’s not such an outlandish idea, really. There are tribes in South America that have distinct, unrelated words for light blue and dark blue, and they are supposedly much better at identifying and recognizing different hues as a result. I think there are also tribes that use the same word for blue and green. They just consider those to be different shades of the same basic color. You can chop up the world however you want. This is just how we’ve all agreed to do it, for now.

The night I removed the toenail, I met an old friend for drinks. That’s misleading, I suppose. I don’t know if you could ever say we were friends, but we went to school together. I had a crush on her at one point. I don’t know at what point I made the decision that I wanted to try and sleep with her, but eventually I privately understood it to be obvious. She was frighteningly skinny. I couldn’t stop staring at her knobbly, veiny arms that looked immensely fragile and gave her hands a freakish, oversized appearance, like the knotted, barky ends of tree branches. There was a harsh tautness to the edge of her skull, too, as if her head had grown but her skin remained the same size as when I last saw her five or six years ago. I guess my attraction to her was more about looking through the years, back to when she was soft and petite but adequately formed, instead of this somewhat desiccated, harsh figure.

But there was a serious intellectual attraction, too. She spoke so earnestly about heady topics, and I felt a need to have that. It seemed attainable, too, and as disgusting as it feels to admit it, I saw it as a challenge. I’m not sure how exactly she ended up back at my apartment, but after we paid the bill and dragged our combined six Manhattans out of the bar with us, she came with me matter-of-factly, as if we had decided on this hours before when we had first made plans. She followed me guilelessly, like she knew where we were going.

We sat on the edge of the bed for some time, which is when some of the best conversation happened. I shared with her one of my deepest doubts and she said that all art is about filling a void, creating something to fit into the gap inside you in order to make yourself complete and whole. But the trouble is, that effort will always be in vain. You can never really attain that sense of completeness, because it is impossible to create something that will fill every last corner of that void. And as much as she and I — and possibly you, I don’t know — may be able to explain and conceptualize this, only certain people are able to really comprehend it.

I leapt forward and kissed her and she dropped back forcefully onto the bed and we dug into each other’s faces brutally. Her mouth opened and closed mechanically, and just like with the rest of her body, a rich fleshiness seemed to have been sucked out of her kiss. But I kept at it, kept blindly pressing forward. I almost drew my hand back as if from a stove when I brushed over the blade of her hip protruding unclad from her body. She was so frail, so meatless in my hands, her legs like arms, her stomach and breasts flat and empty, everything hard and sharp and angular.

I asked her if she was okay and she said yes, she was fine, just go slow. It was over quickly and mercifully. For some reason, she did seem satisfied afterwards. I sat back and looked at her spindly body, her lifeless breasts contained in a lacy but barely necessary bra, her legs emerging directly from her torso like poles. She was still wearing the double-knotted Converse high tops that I had been unable to remove.

“It really is,” I said. “I hope you’re not offended if that ends up in something I write someday.”

She laughed and said, “Not at all.”

There’s always the chance that this will be the time that the toenail gets infected, that I could get blood poisoning like my cousin who wasn’t really my cousin. Most likely it will simply grow back, just like every other time. In a few months, I’ll do it over again. I’ll work at it and tear it out and there will be a hole. Is that a metaphor for love after all? If so, it’s a shitty one.

Connor Ferguson’s writing has appeared in The Rumpus, Gargoyle Magazine, Electric Literature, The Good Men Project, and other publications. He lives in Boston. Follow him on Twitter @csferguson.