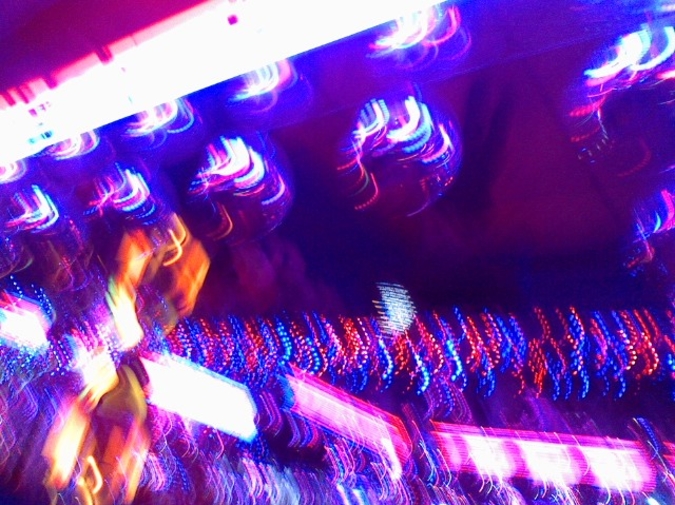 I liked the illustrations, like if you lined up dollar bills, each representing a millennium, you could wrap them around the moon one hundred million times and then there you’d be, at the end of that line, trying to jam the last thousand years into a Coke machine outside a Walgreen’s.

Time seemed math-y but also philosophical—kind of a bearded guy in a toga. On the one hand, you might look at your watch and see that your doctor’s running seventeen minutes late for the appointment at which you know he will tell you that the treatments have failed. On the other, you stand on the observation deck at the Desert Inn, and the attendant points out a high sediment line on the valley rim. See how it jumps that gap? What happened in that gap? Yes, a washout or collapse, but why and when? He’s pointing and squinting and you’re admiring the way his nappy hair makes his red banded uniform look natural, like something he’d wear to a party, while he speculates about the ruins of Las Vegas. Who will find them? Sadly, they won’t include the Desert Inn, because they’re imploding it next fall. Really? Really. Really, he’s an amateur geologist more than a balcony attendant, because yes it’s right to worry that someone will gamble away his house and his car and rather than face his family, and anyway the treatments have failed, he’ll just check out—whoop, off the top of the casino—but the truth is, you’d need some kind of saws-all to get through that plexiglass and even in that difficult era, no one brought a saws-all to a casino balcony.

I was dating this girl and we reached that point of commitment where we showed each other our drivers license photos.

This part is for Ken Nordine: beyond all the cards and paperwork—it was a concept surrounded by red tape, or maybe police tape, or caution tape—Cuidado! Piso mojado!—there was something else. Something… deeper.

But you might as well joke about it, honestly, because who’s going to put a finger on that one. Not this honky.

Stories about people who lost it were definitely popular. That bear guy? The guy who lived with bears? I like how they show him loading a truck that says “pansies” in big floopy letters. I call bullshit on that. The point was to suggest his latent homosexuality, which somehow caused him to live with bears.

Something there is beyond hats and haircuts that flowers and bear cubs don’t even consider.

Secret or fake ones were popular and useful, but also dangerous. At nineteen, you might procure an easily replicated Iowa drivers license and enter establishments of ill repute, where unscrupulous men and loose women might lure you into the underworld, where your convenient alter-ego would suddenly find itself ball gagged.

I always liked amnesia stories. With spies. And scientists. And amazing sex with a person you’re married to but totally don’t recognize.

Like a Matryoshka doll, you could go in and in until you were living in a nice development on the outskirts of a rhizome, working nine to five at a lepton factory, deep in the heart of Will Bulka’s kneecap, and that might be it: your core identity.

You could wake up in the morning, immediately consume eleven problematic commodities, and still, if you felt this inner force justifying your actions, remain untouchable. You were you, and the world would have to deal with that.

I was like a bad goalie—every experience got by me—until I started concentrating on the future. With the future in mind, I became more like the puck, constantly rushing forward at trajectory, happily subject to the slap shot of fortune. Into the net, clang off the pipe, hard dump in the corner, it doesn’t matter. I know I’m a rubber disc being whacked around in the cold, and that’s enough for me.

With fortune cookies, “the future” arrives in bed. “By watching out for your fellow man, you watch out for yourself (in bed!).” A significant percentage of second dates that begin with good Chinese food end with “think with your mind, work with your hands (in bed!).” Obviously I’m making that up. Don’t worry, it’s disturbing to me too. Which is also what God said to his buddies at the office after a one-week bender at Void Nineteen. “Don’t worry. It’s disturbing to me too (in bed!).”

Conscience will toss pebbles at your windows in the night. I recorded stories of people who’d survived catastrophes. They came to seem ordinary—everyone’s house was hit by tornado—and as everything became debris around everyone, as the boat capsized and everyone hit the frozen water, as the support chopper crashed and everyone emerged pointing guns at everyone, everyone believed his or her life was simultaneously precious and over. Talking with me was a kind of non-experience, from a time they’d given up on. The future. Shrug. Crazy world. You can find them on cassette in the oral history archives.

When you’ve admitted that everything is real. Whatever else it might be. That you can drive five hours to watch your young boy skate and crash and eat noodles and giggle and be grateful that all weekend he doesn’t complain much even when he’s tired and then drive home with him sleeping and see all the sloughs and lodge pole pine, dead deer and tornado damage. All of that plus infinitely more things that you can’t even perceive are real. When you accept and feel that, then the future becomes almost impossibly perforated by emotions.

I ended up in my house, plinking a hundred year old piano. Even into my forties, I persisted in writing down stories, featuring self-destructive male characters whose strange therapies I invented. I’ve heard that Basho tried to stop creating images—the sunken moon, asleep on horseback—and when he was unable to stop, struggled to forgive himself the weakness.

For a while the future planned to contract back to whatever pinpoint origin into a new crowd crush or even through and inside-out into a spooky negative of us. Smarties tried every way of explaining, and finally arrived at the balloon-pulled-through-a-peephole explanation, which both worked and made clowns sexy-magical. But we soon learned no clown could match the power of entropy, which could go forever pulling until the balloon was a thin disc of nothing, basically—maybe a single slap shot neutrino zips by toward, sigh, what goal?

There were apostles. And there were postulates. And a small hawk resting on a long stalk of marsh grass.

By living according to core values, we can carry on daily tasks with conviction. Conserve fossil fuels. Avoid the plastic cycle. Too much looking around can lead to paralysis due to the inevitable sense of unfathomable vastness that makes consciousness feel like an infinitesimal quirk. Keep to your routine. In the future, smaller, more focused organisms have a good chance of surviving briefly.

William Stobb is the author of five poetry collections, including the National Poetry Series selection, Nervous Systems (2007) and Absentia (2011) both from Penguin Books. He works as Associate Editor for Conduit and chairs the Wisconsin Poet Laureate Commission. He lives in La Crosse, Wisconsin, near a huge statue of Hiawatha.